Wat Wihan Thong is a ruined temple on the opposite side of the Nan River to the more famous Wat Phra Si Rattana Mahathat in Phitsanulok, Northern Thailand. 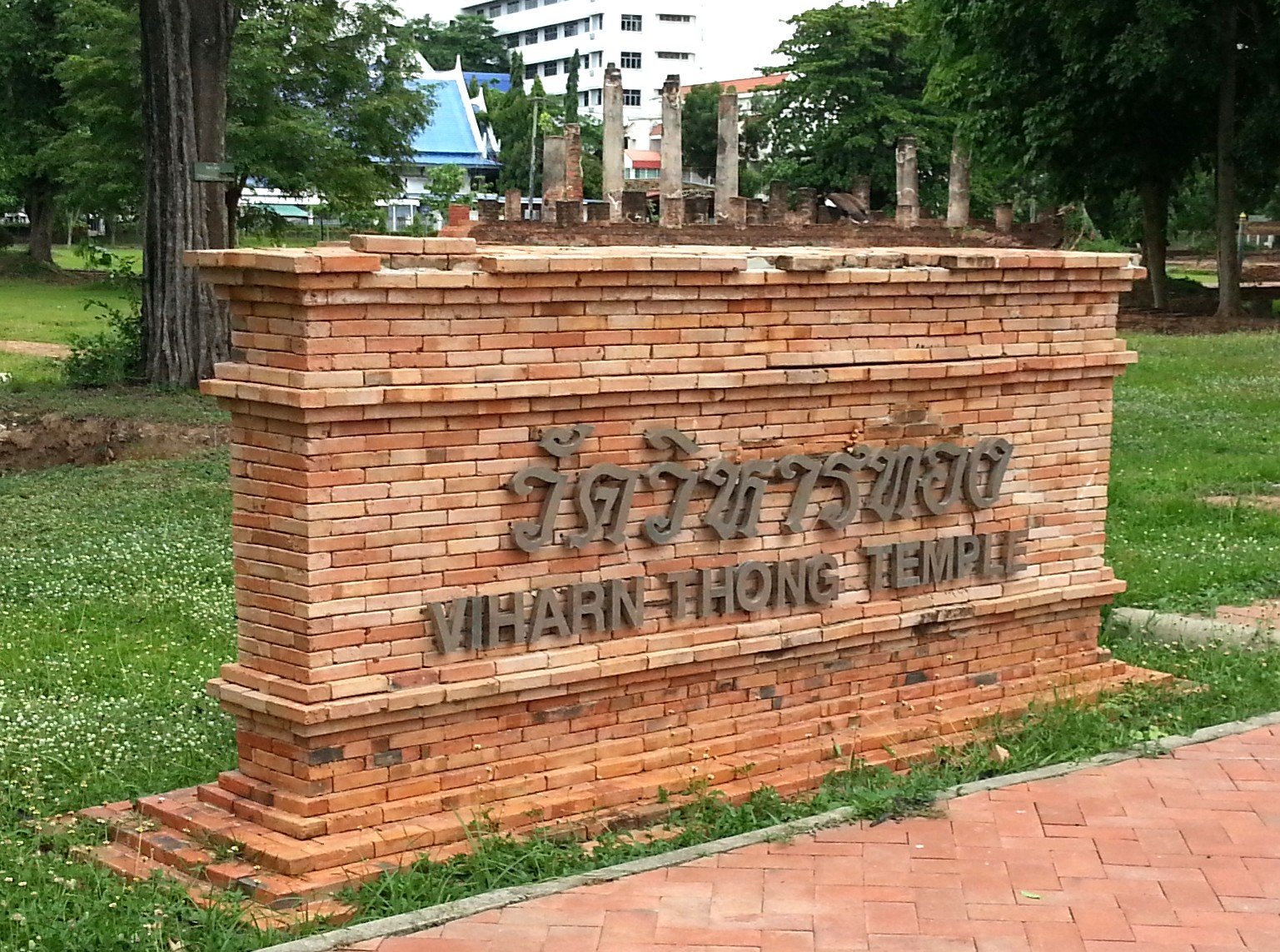 Wat Wihan Thong is open to visitors all hours and admission in free.

Wat Wihan Thong is located in the grounds of the Chan Palace which was the residence of the Ayutthaya Royal family in the 15th Century and most famous for being the birth place of King Naresuan the Great. King Naresuan the Great ruled the Ayutthaya Kingdom from 1590 to 1605 and is a legendary figure to Thai people and the subject of many works of literature and films. What made King Naresuan ‘great’ was the number of military victories he achieved over the armies of Burma. which was was at the time the regional superpower. In particular, King Naresuan is remembered for fighting a duel on a war elephants against the Crown Prince of the Burma and killing him with a lance. 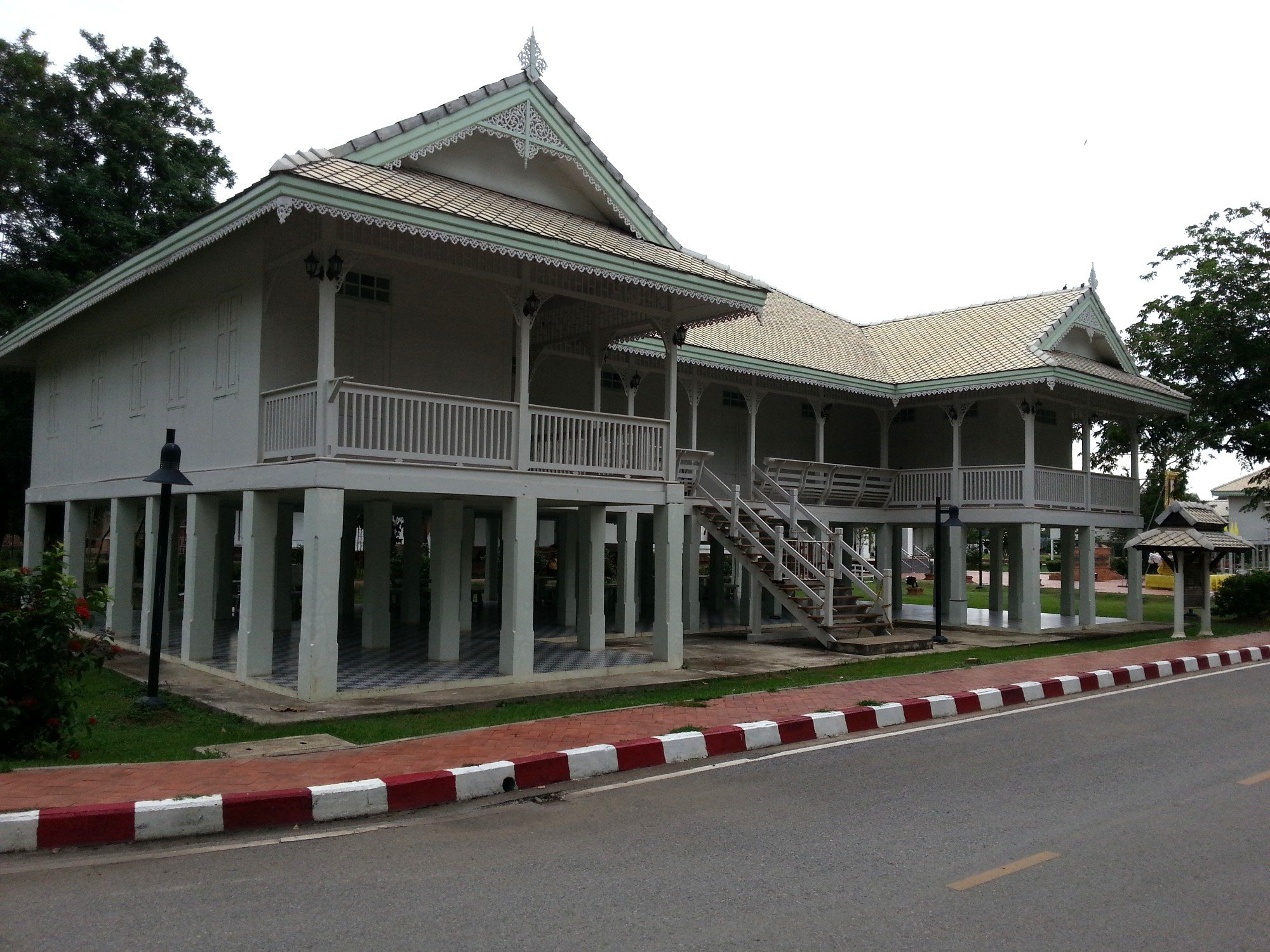 Reconstruction of the Chan Palace

What stands today on the site is a recent reconstruction of part of the Chan Palace as it is believed to have looked during the 15th and 16th Centuries. The palace went out of use after the reign of King Naresuan the Great and school was built on the site in the 1920s. During work to expand the school in 1992 foundations of the palace and many artefacts were discovered and control of the site was thereafter transferred to the Fine Arts Department to preserve and develop as a tourist attraction. The school is now located elsewhere in Phitsanulok. 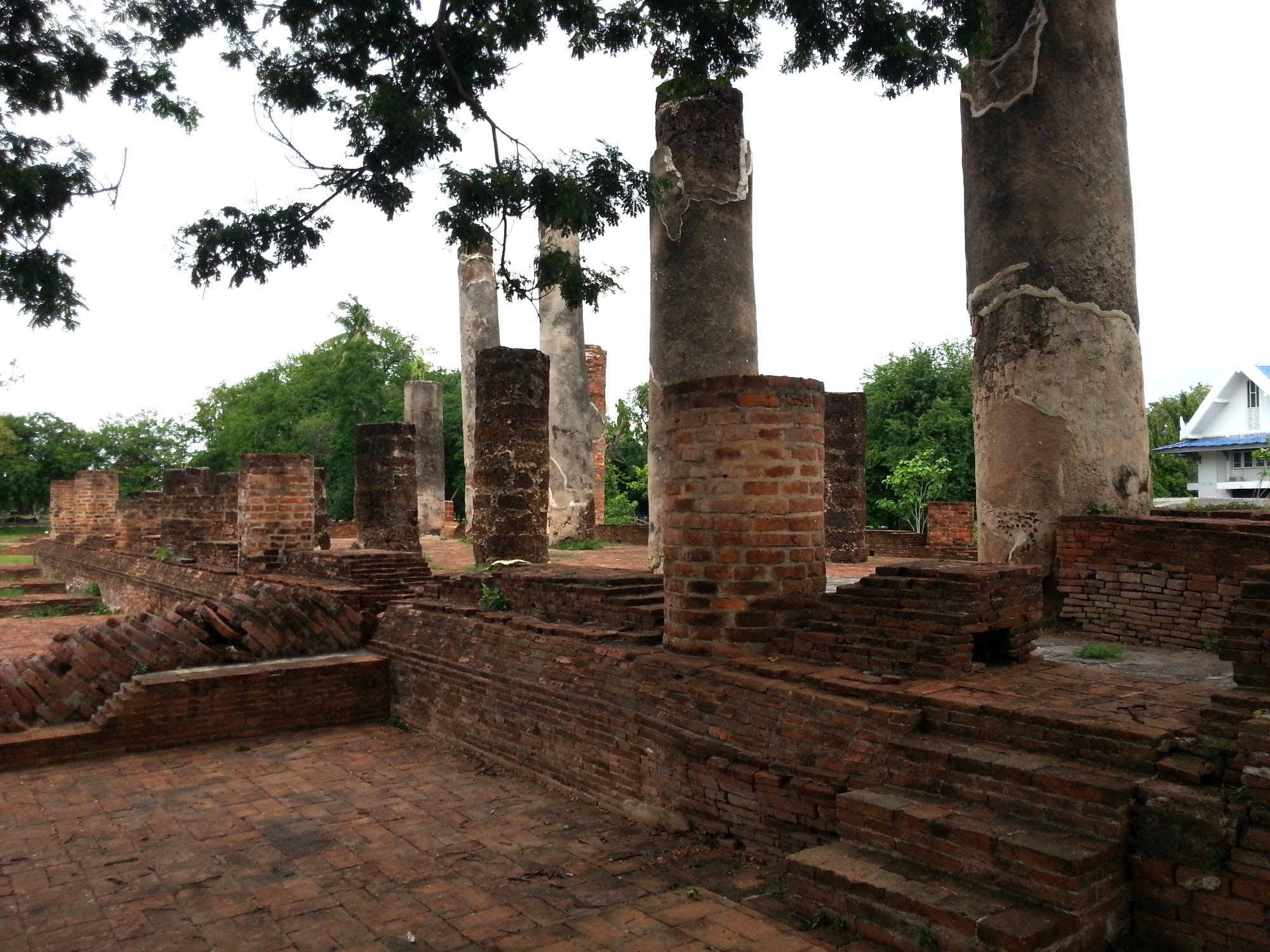 Remains of the prayer hall at Wat Wihan Thong

Wat Wihan Thong is believed to have been constructed in the 15th Century as a Royal Temple, connected to the Chan Palace. There are no definitive historical records of the date of construction or what the temple would have looked like so the exact history and design of the temple is a matter speculation. 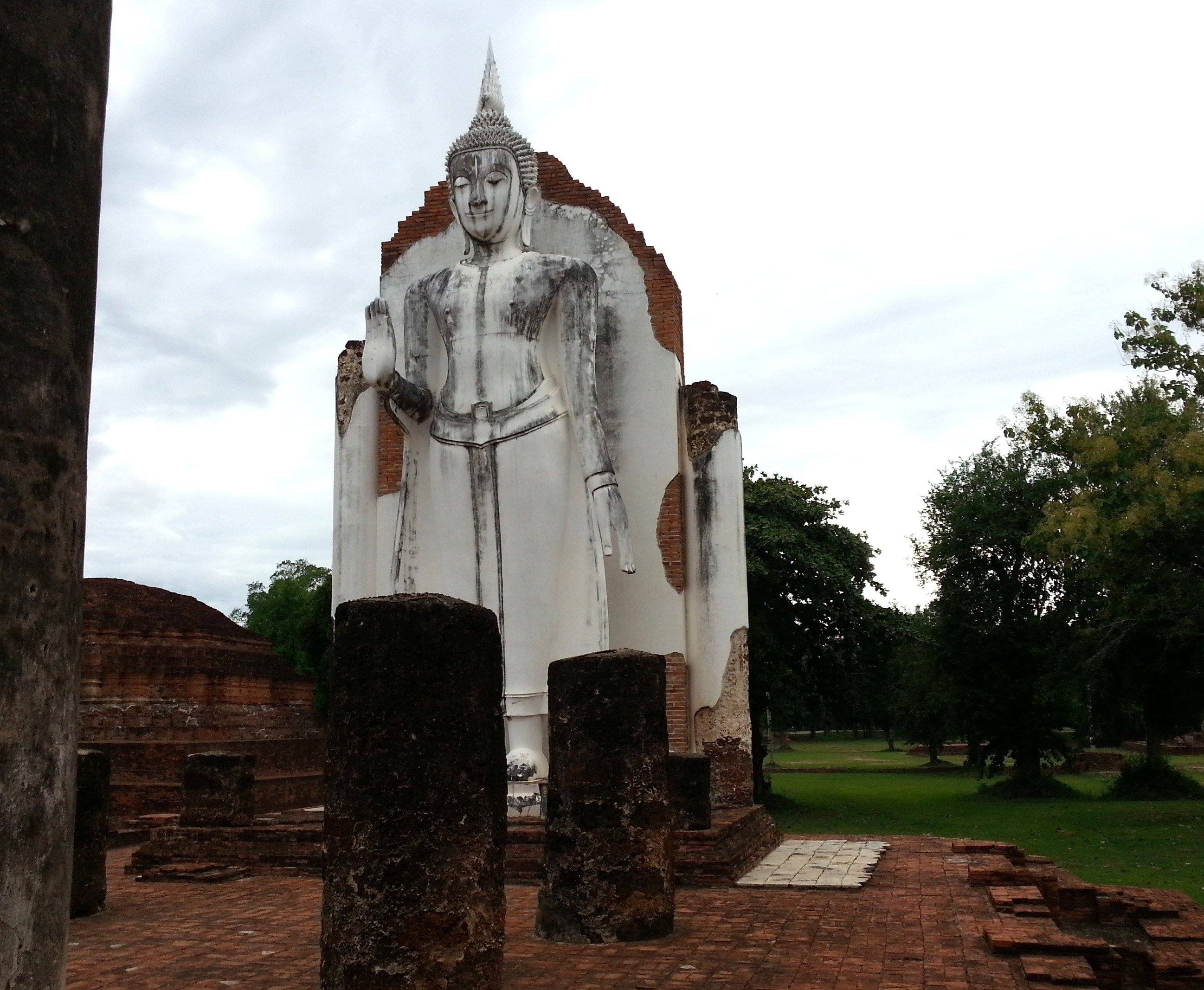 The ruins of Wat Wihan Thong consist of the ruins of a temple building, believed to be a prayer hall, a large Buddha statue and the base of a stupa. What is left of the prayer hall is a brick base and a number of tall stone columns. Based on the design of a temples elsewhere from a similar period the stone columns are believed to have supported a wooden roof structure. 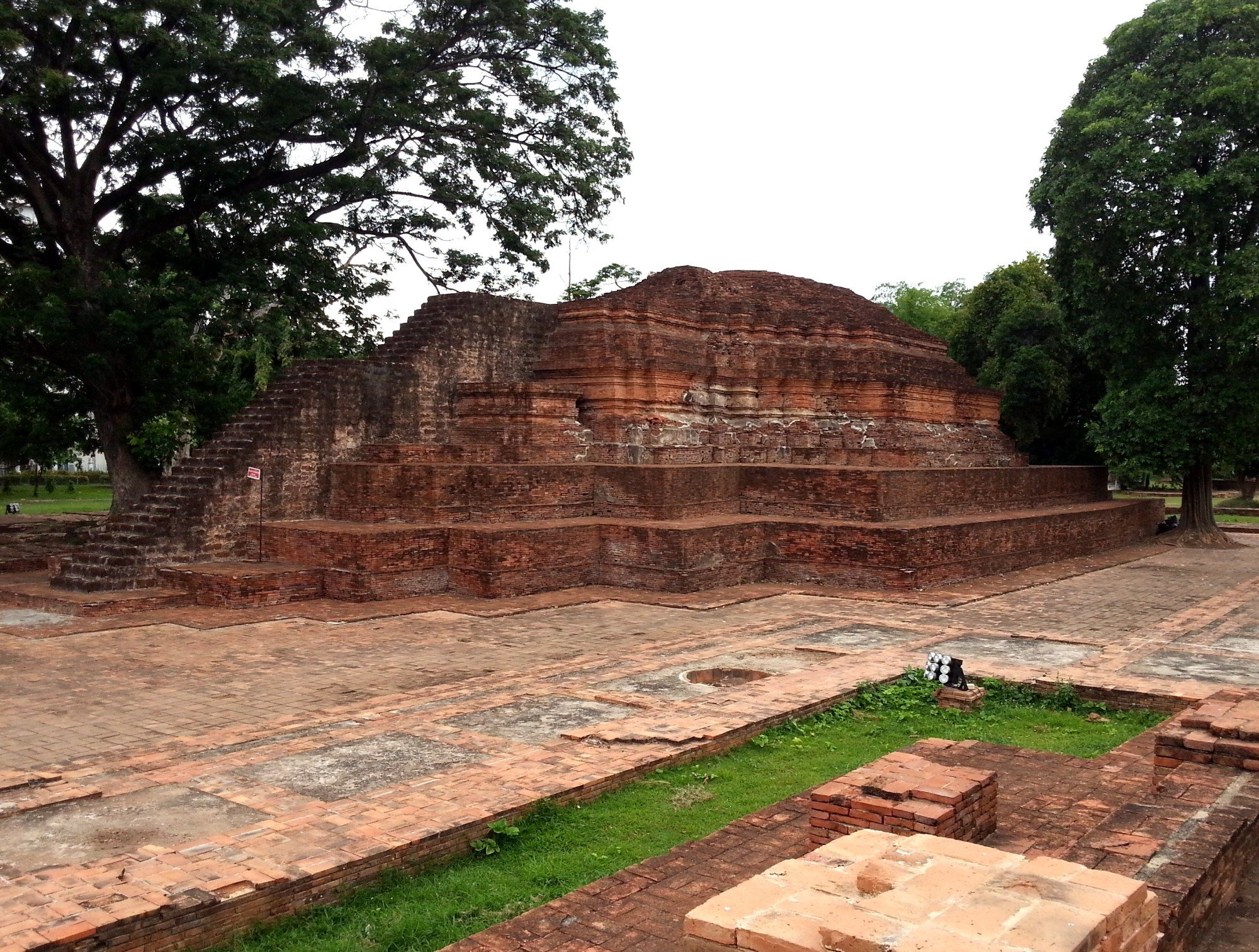 Base of the prang style stupa at Wat Wihan Thong

The stupa at Wat Wihan Thong is believed to have been a ‘prang’ style tower, which is a design with a distinctive corn cob shape and associated with the Khmer civilisation. You can see intact Prang towers at number of other locations in Thailand such as the famous Wat Arun riverside in Bangkok and inside the courtyard of Wat Phra Si Rattana Mahathat on the other side of the river in Phitsanulok.

Next see Flight times from Bangkok to Phitsanulok