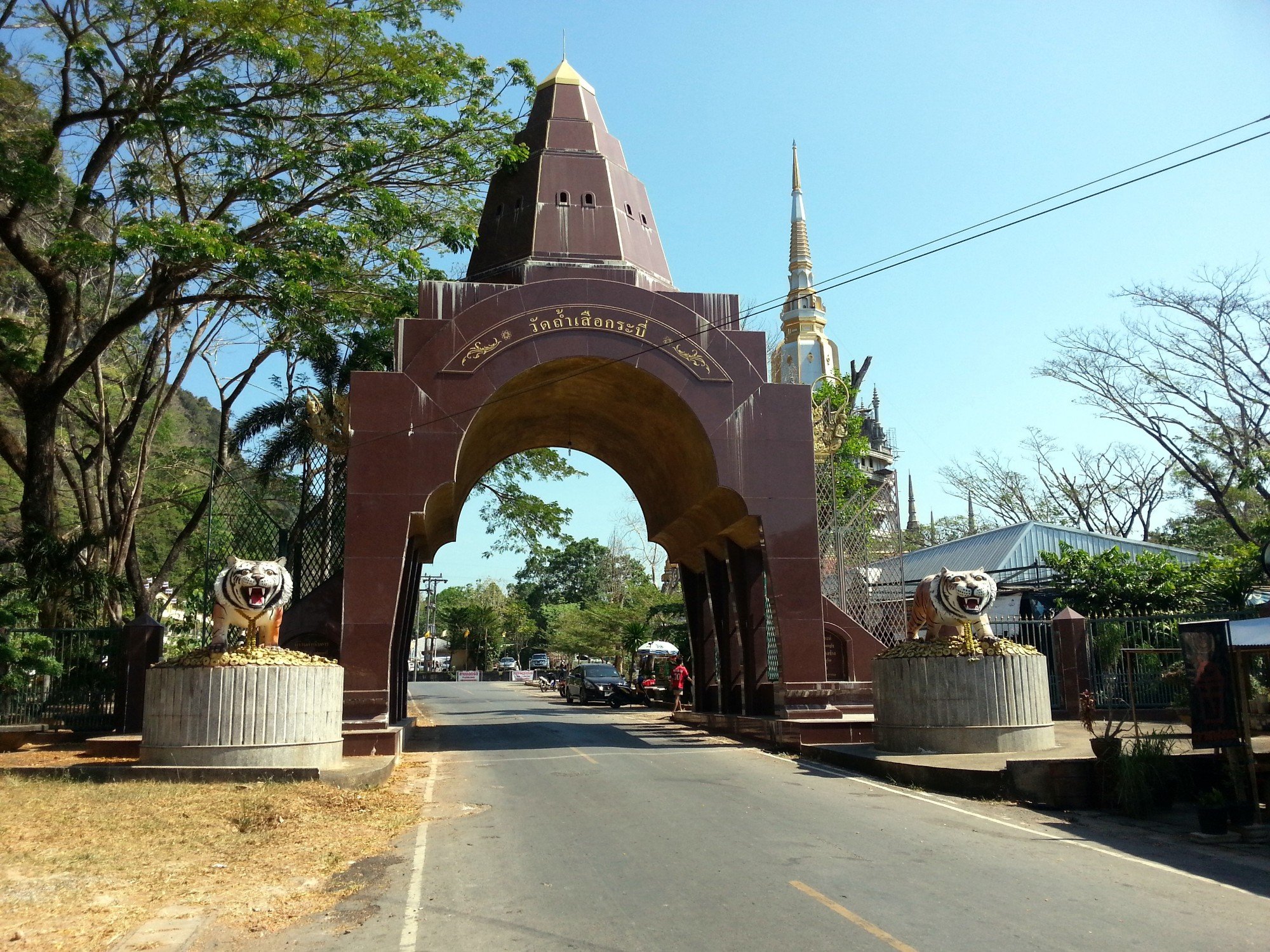 Wat Tham Suea is open all hours all year round and admission in free, although donations are welcomed as the temple is entirely funded by voluntary donations.

Wat Tham Suea was established as temple in 1975 although the area had been used by monks as meditation retreat for hundreds of years prior to the construction of any temple buildings. The legend is that a famous monk had a dream that a tiger used to live in the cave where he was sleeping, hence the name Tiger Cave Temple. 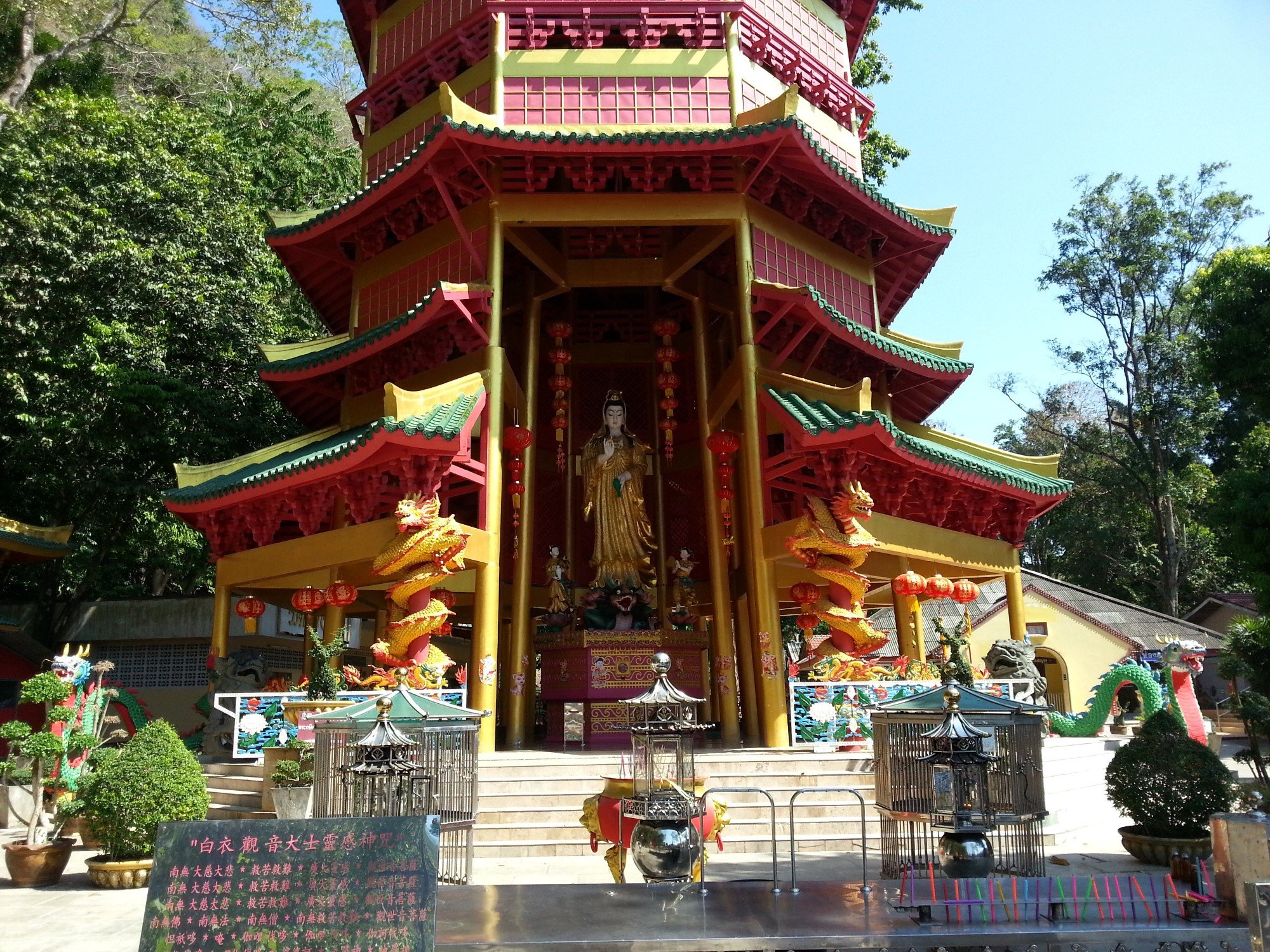 There are three parts to Wat Tham Suea. The first part of the temple is a cluster of temples, shrines, and statues located near the main entrance at the foot of a steep hill. This part of the temple is constantly expanding with a diverse range of different structures being built. The main shrine is dedicated to Guan Yin, who is revered in many Asian religions as the Goddess of Mercy. The Guan Yin shrine is housed within a Chinese style pagoda indicating the influence of Chinese immigrants in this part of Thailand. 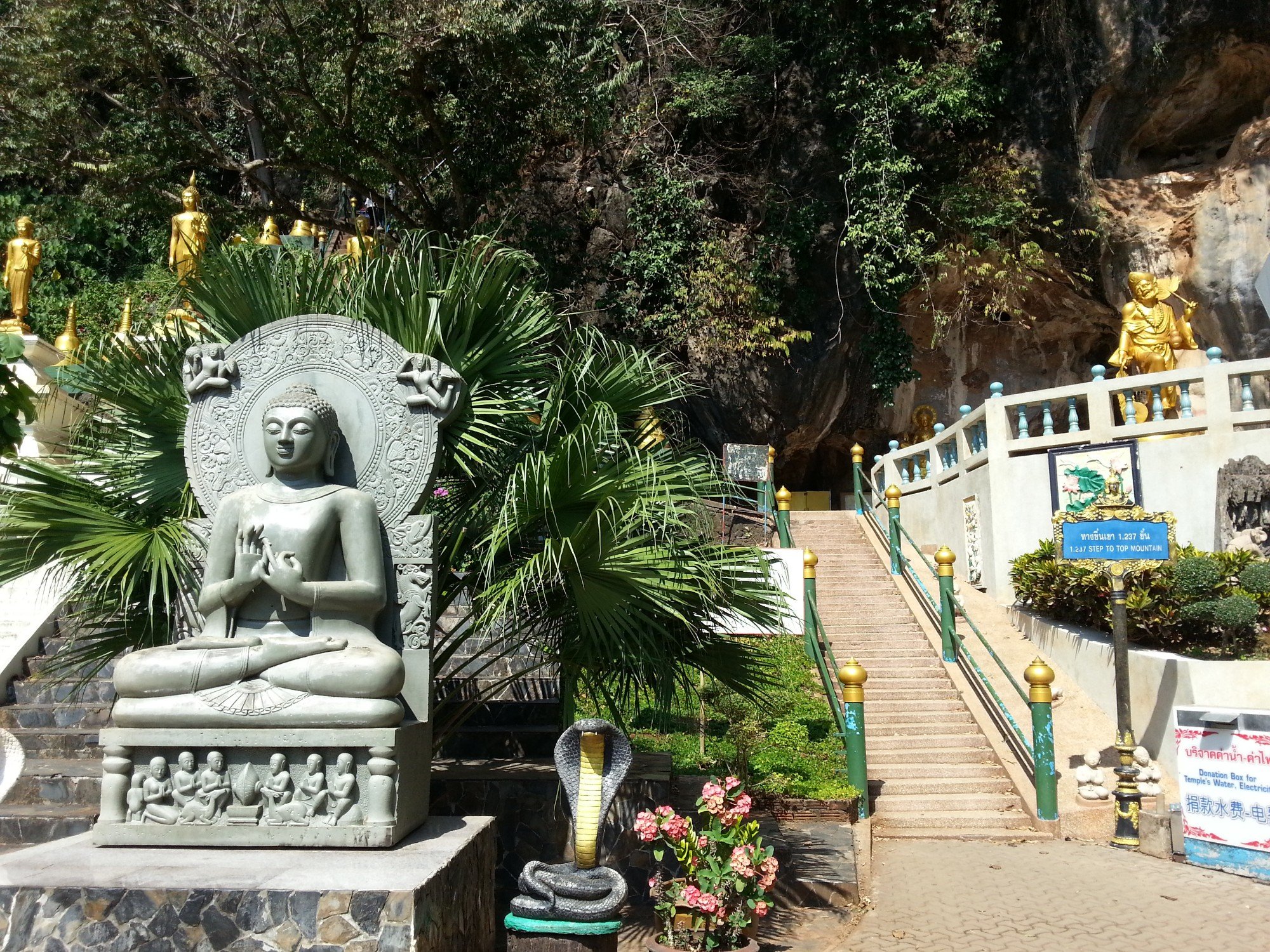 The second part of Wat Tham Suea is the hill top temple, which is the major attraction for most visitors to the Tiger Cave Temple.

Stairs up the mountain at Wat Tham Suea

The only way to reach the hill top temple at Wat Tham Suea is to walk up the stairs. It’s a long steep climb that requires a lot of effort and takes 20 to 40 minutes to complete depending upon how fit you are. Most visitors will need to stop several times on the way up to catch their breath as these are steep stairs. 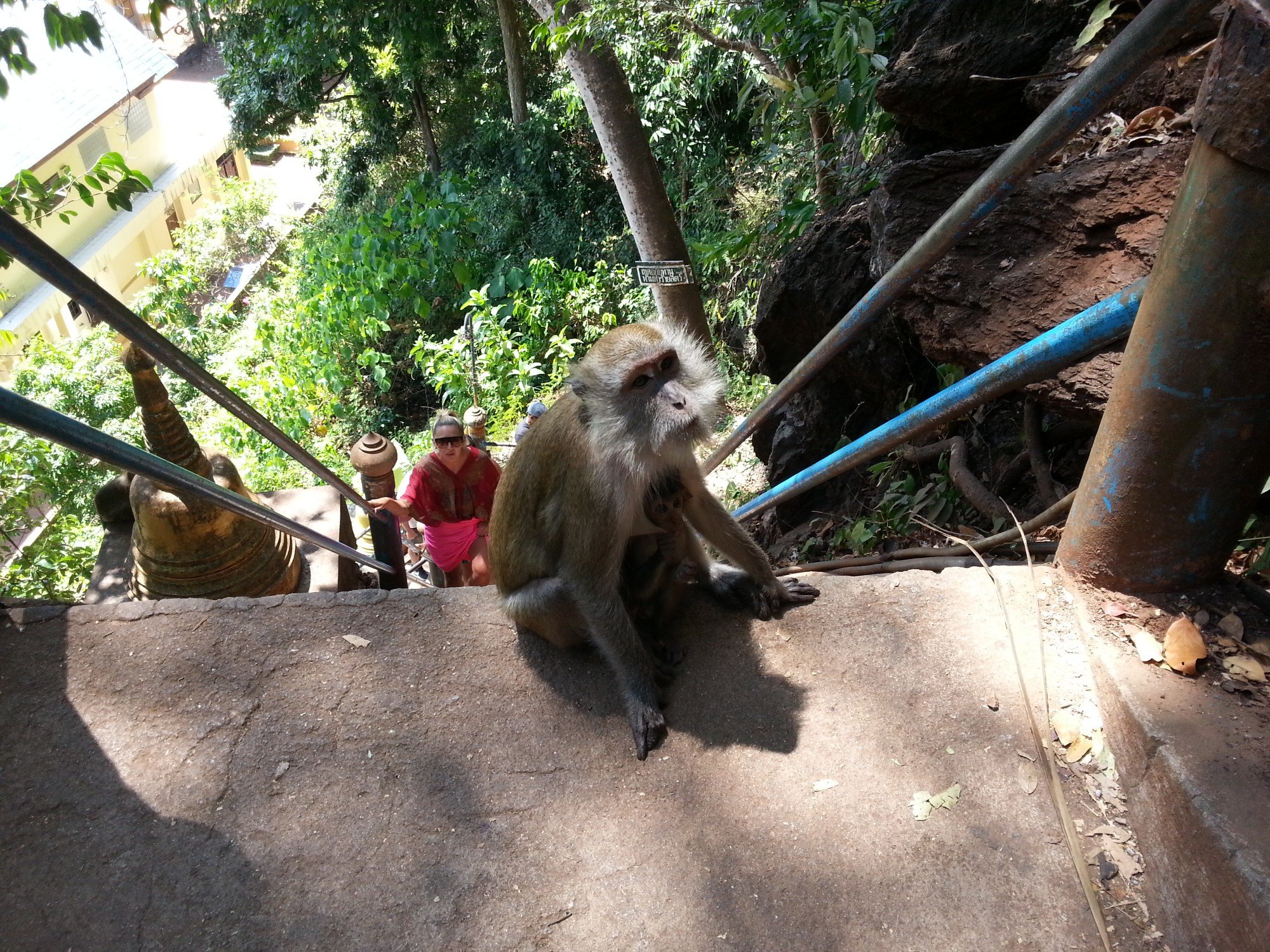 The bottom part of the staircase up to the hill top temple at Wat Tham Suea is home to large troop of macaque monkeys. These are wild monkeys who, although used to visitors walking through their territory, can become aggressive if you have food with you or you try to touch them. If you leave the monkeys alone and don’t tempt them with food then they will simply ignore you as you ascend the stairs. 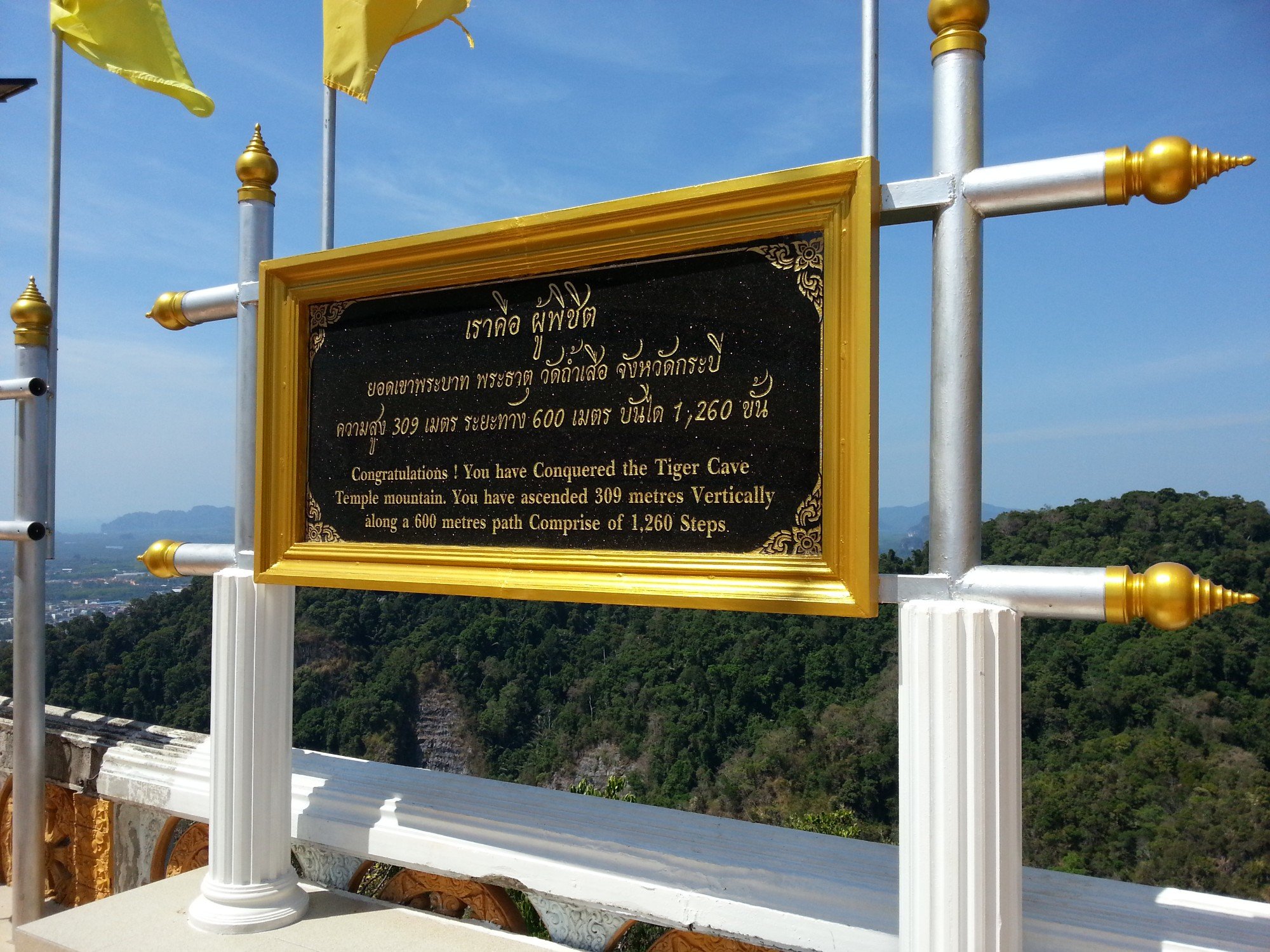 There over 1,260 steps to the temple at Wat Tham Suea

The reward for those visitors who do manage to make it to the top of the stairs to Wat Tham Suea’s hill top temple is some of the most magnificent views you will see anywhere in Thailand. Most of the surrounding countryside is flat, with a spine of hills leading away from the temple. 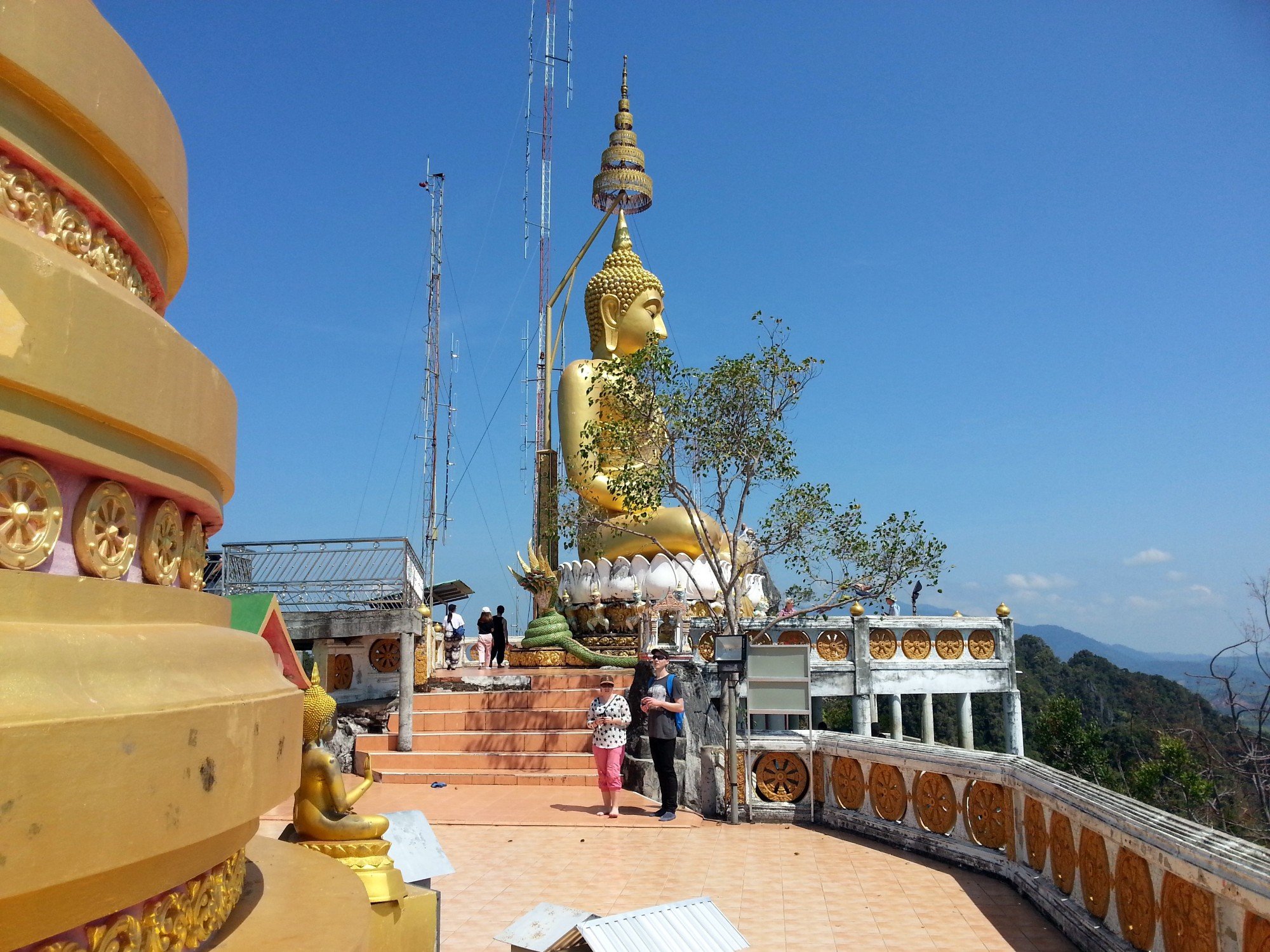 The hill top temple at Wat Tham Suea has a large gold Buddha statue, some smaller statues and a large large chedi tower all on a platform with a guard rail protecting visitors from the steep drops on all sides. 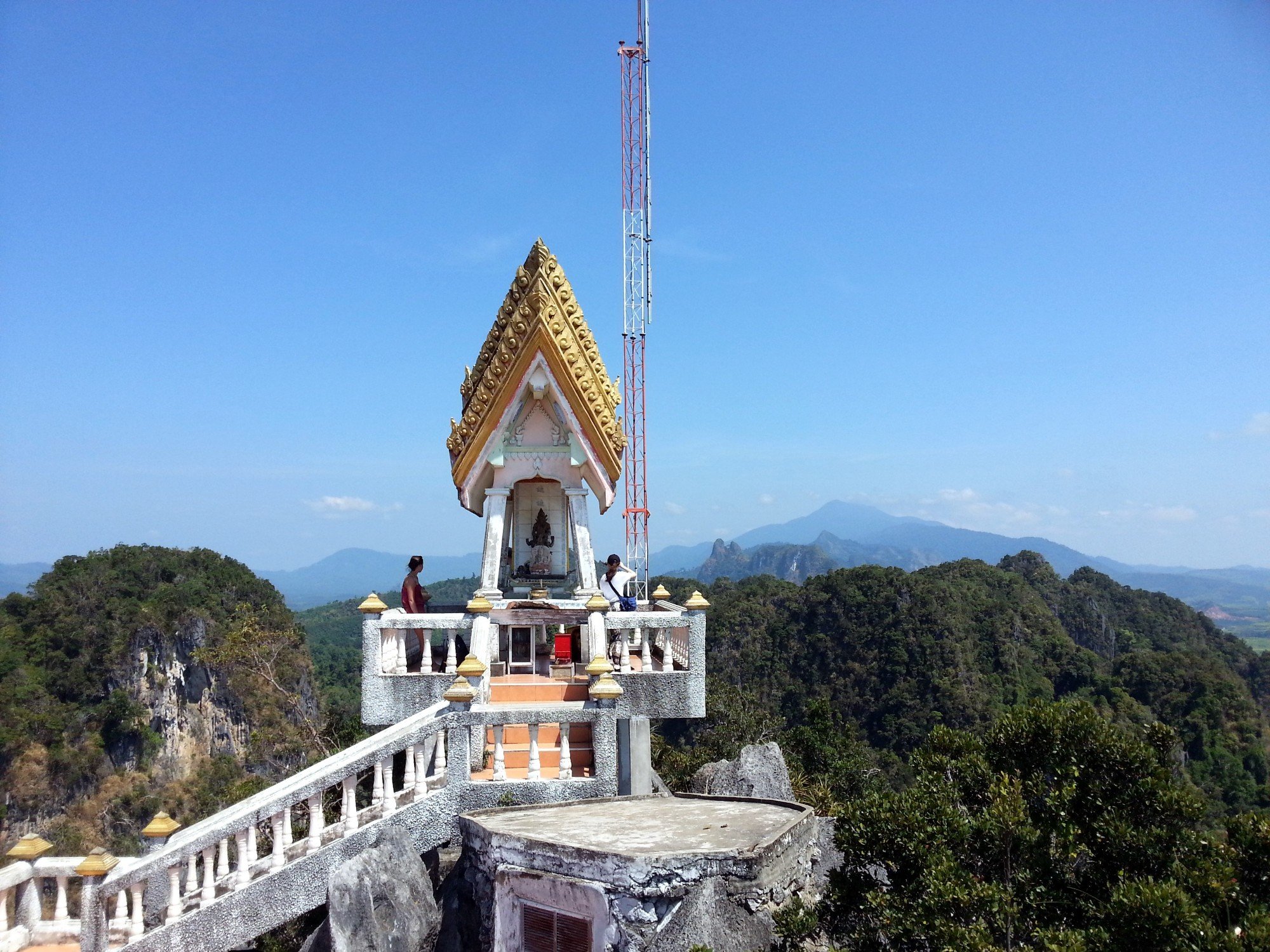 Above the platform, up another flight of stairs, is a small shrine and it from here that you get the best views. 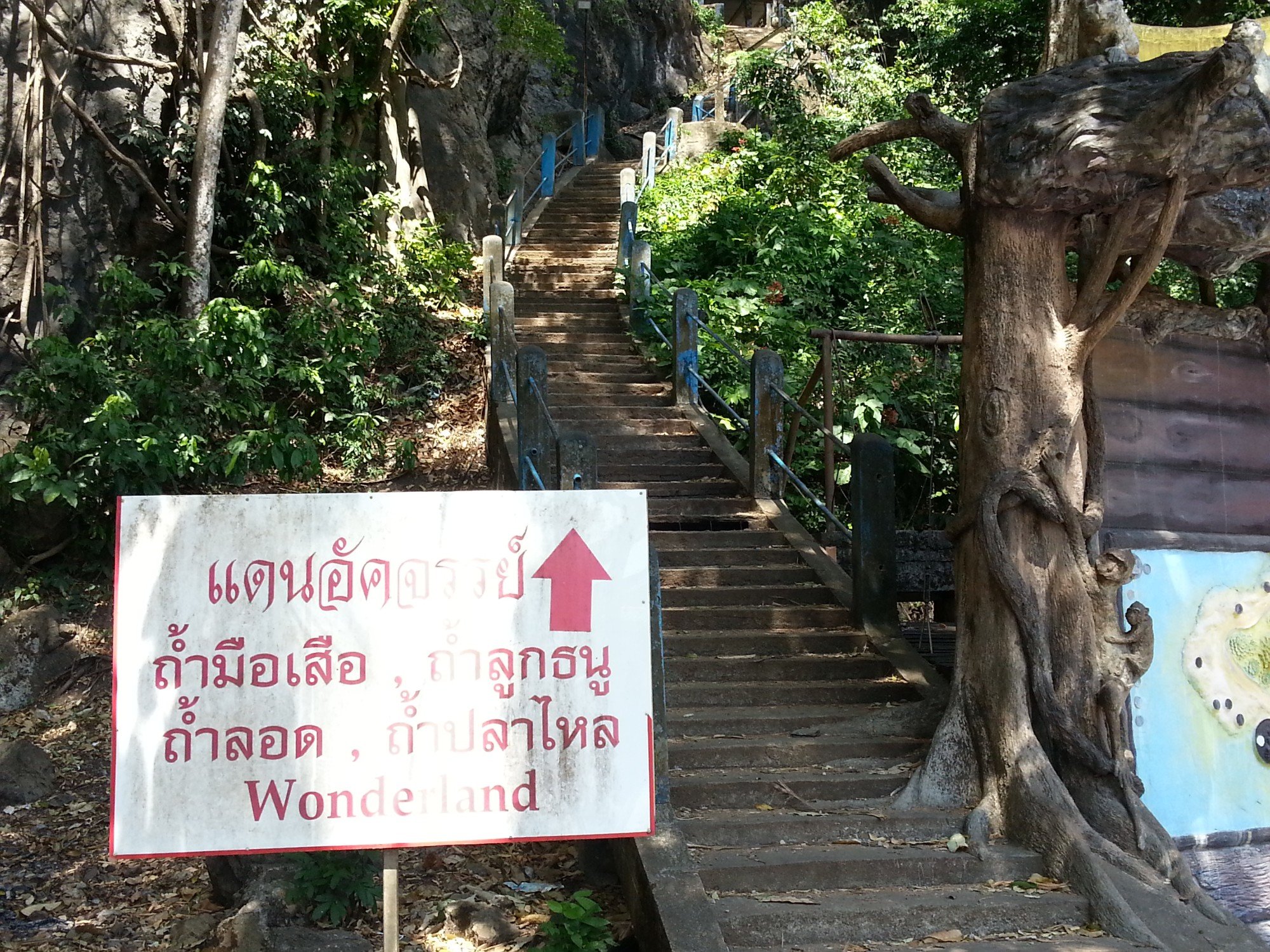 Stairs to the caves at Wat Tham Suea

The third part to Wat Tham Suea is a forested area with a series of small caves. This part of Wat Tham Suea is the least visited part of the temple but also the most important. To reach this area you need to climb more stairs (only a couple of hundred this time) and this puts a lot of people off from visiting as they will already be worn out from climbing all the way to the hill top temple. 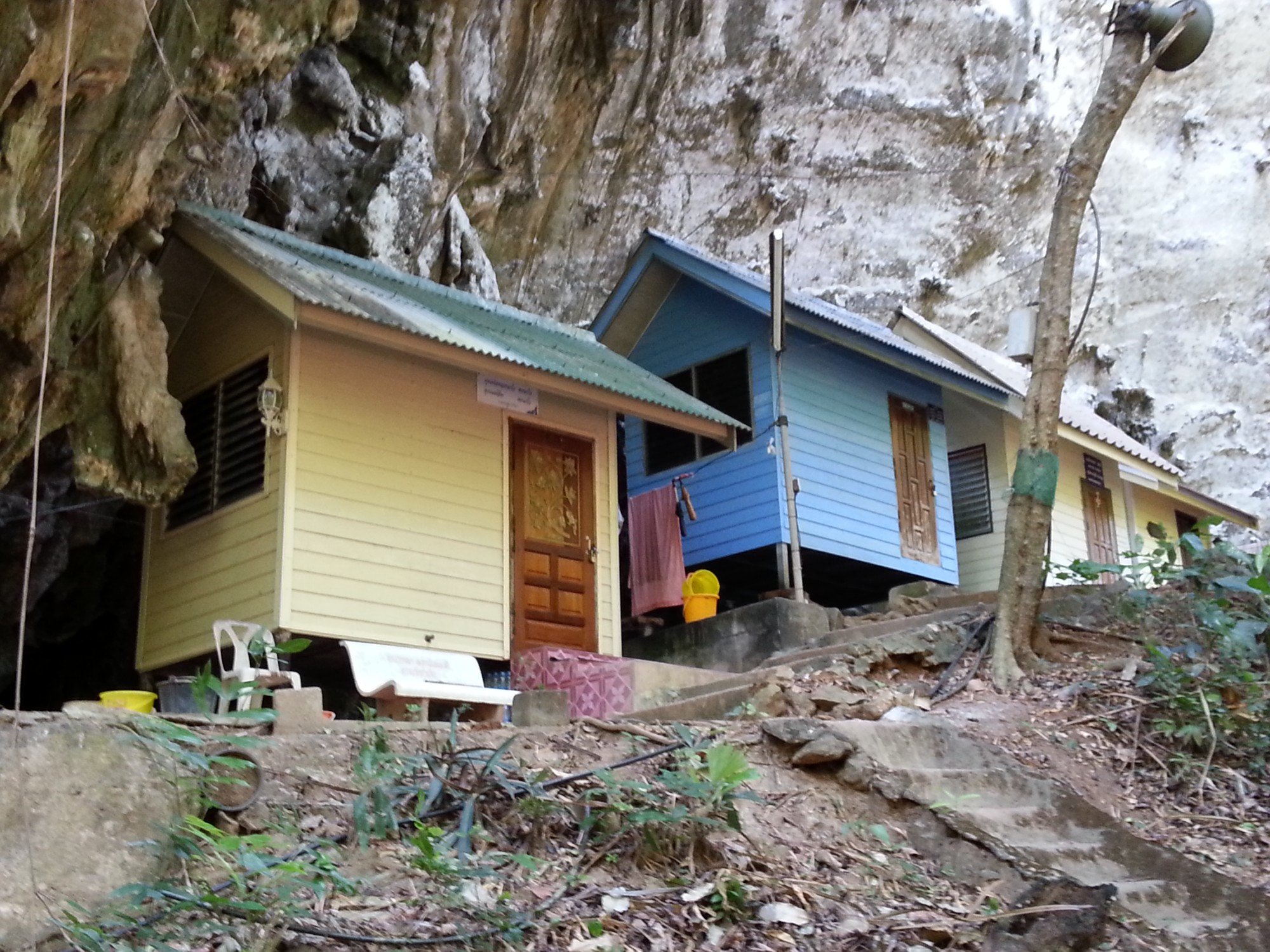 The third part of Wat Tham Suea is still used as a meditation retreat as it has been for centuries. There are lots of ‘Kuti’, monk houses, located here in and amongst the forest and the caves. 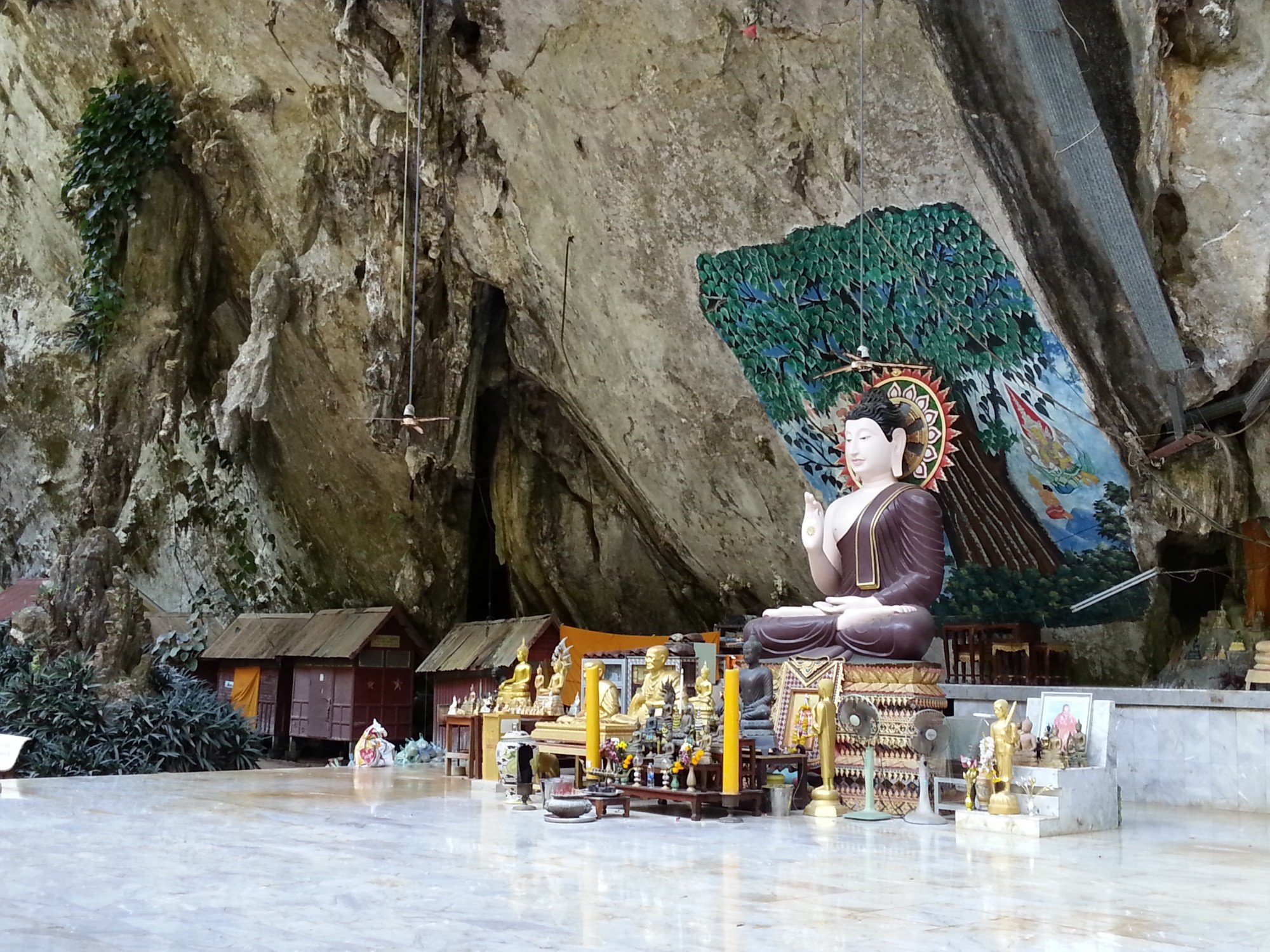 There are lots of caves here, both small and large, and many have shrines inside them. The monks come here to meditate early in the morning. 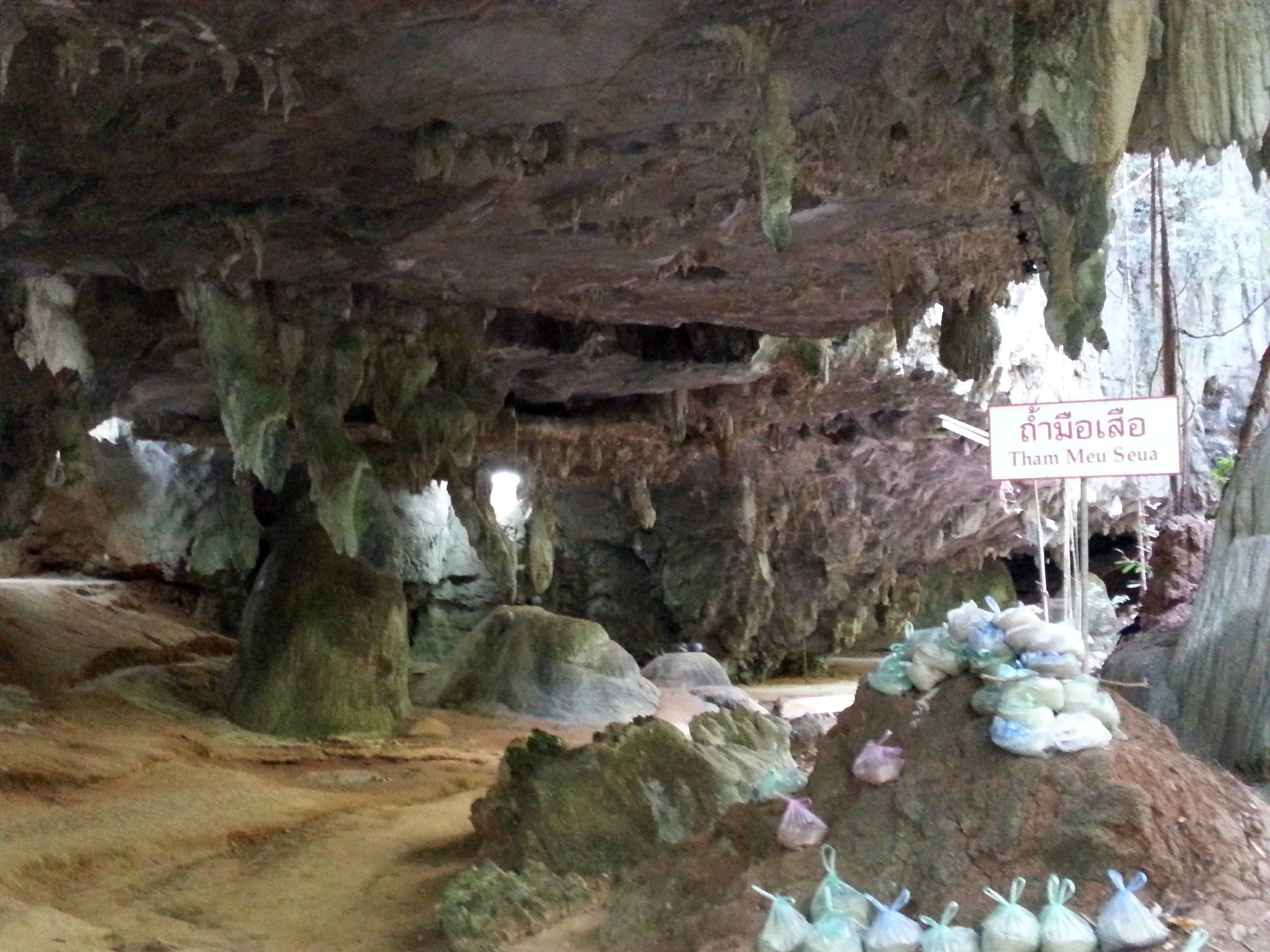 One of the many curiosities at Wat Tham Suea is the legend of the tiger than the monk dreamt once lived in these caves. Whether or not a tiger ever did live in these caves is a matter of debate although it is possible as wild tigers were still roaming around Krabi Province in the 1970s although by that time they were a rare sight sight. One of caves, ‘Tham Meu Suea’ or Tiger Hand Cave, has an impression in the wall that looks like a tiger paw which in part fuels the legend of the tiger that once lived where the temple is located.

Next see Ferry times from Krabi to Koh Phi Phi