Wat Phra Singh is one of the main tourist attractions in the historic walled city area of Chiang Mai.

Wat Phra Singh is open to visitors every day from 06:00 until 20:00 and foreign visitors are required to pay an entrance fee of 50 THB.

Wat Phra Singh was founded in 1345 by King Phayu of the Lanna Kingdom, which was independent state within Thailand established in 1296 with Chiang Mai as the kingdom’s capital city. The first structure King Phayu built was a large chedi tower in which to enshrine his father’s ashes. The original chedi is still standing although it has been enlarged and covered in gold paint since the time it was first built. The square base of the chedi features animal statues each representing important events in the life of the Lord Buddha. For example, the deer statue relateds to the first sermon the Lord Buddha gave after attaining enlightenment at the deer park in Saranath, which is close to Varanasi in India. The main chedi is surrounded by four smaller golden chedi. 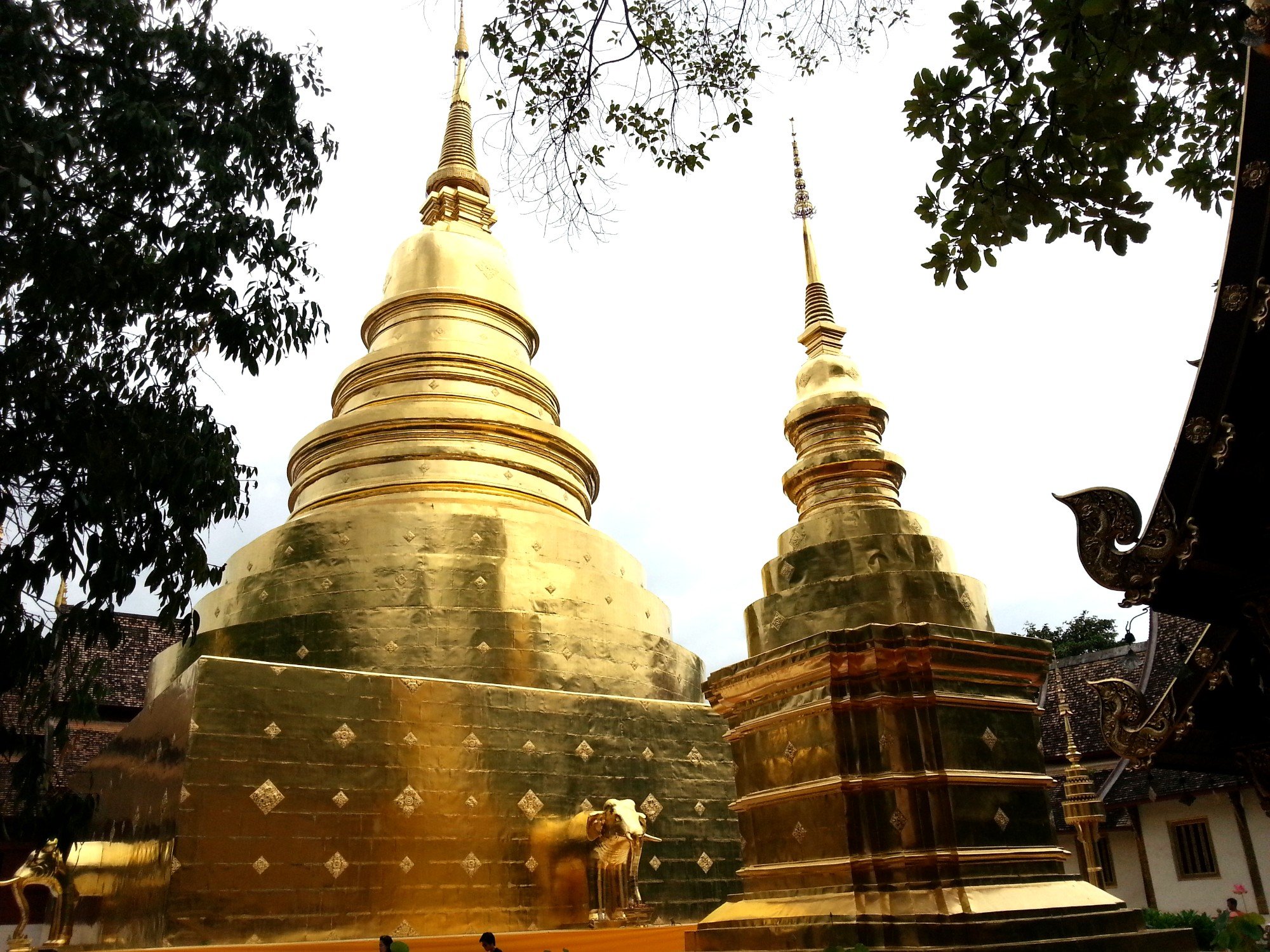 The main attraction at Wat Phra Singh is Viharn Lai Kham, which is a prayer hall built in 1345. The prayer hall is made of wood with intricate carvings and is considered one of the best surviving examples of Lanna era temple architecture. 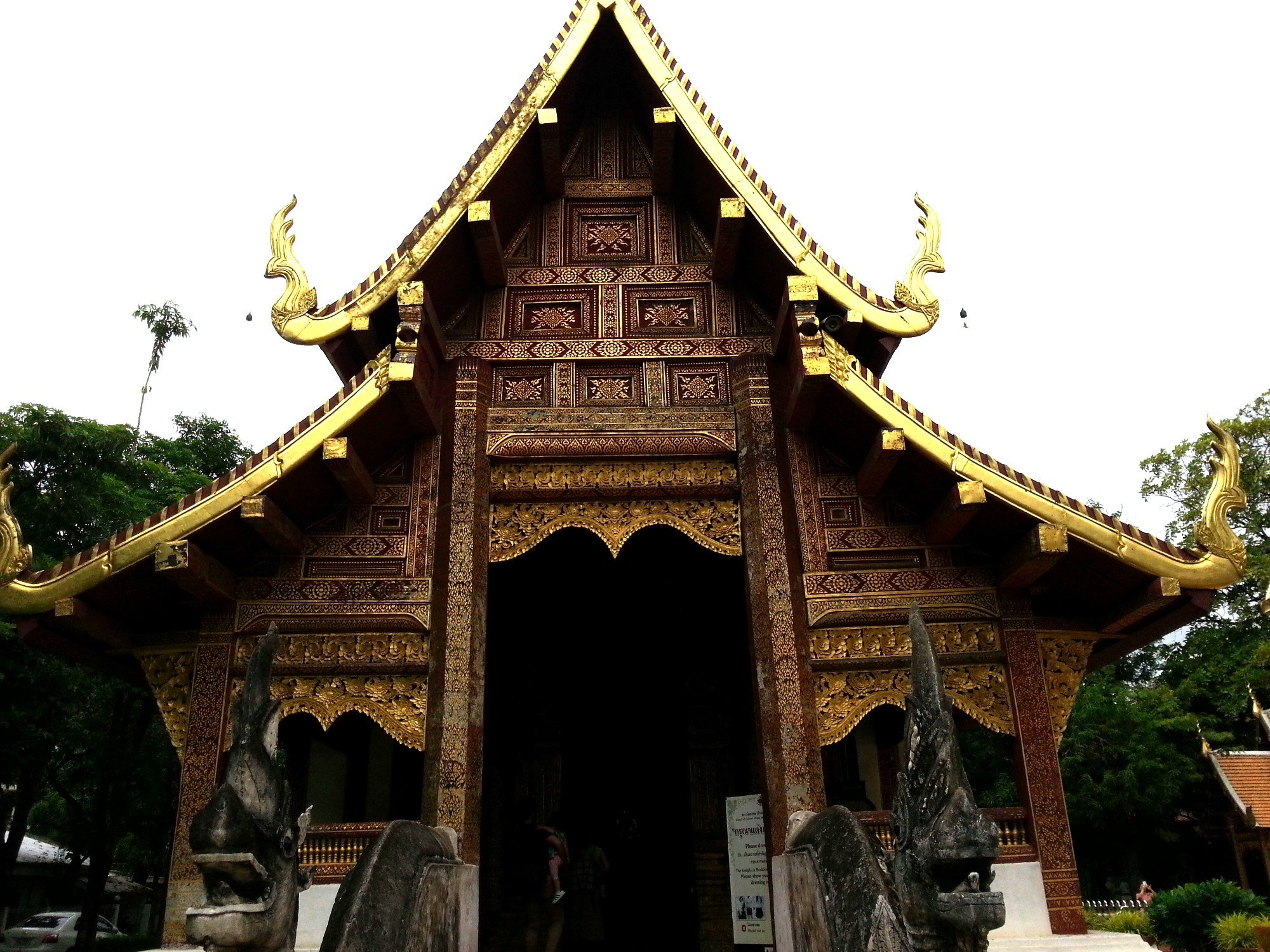 Inside the Viharn Phra Singh is the Phra Singh Buddha statue after which the temple is named. The origins of the statue are not known for certain and there are several competing theories as to who made it and when it was made. According to local legend, and this is the reason why it is believed to be so important, the statue is a copy of a statue which was enshrined in the Mahabodhi Temple in Bodh Gaya, India. The Mahabodhi Temple is built on the spot where the Lord Buddha attained enlightenment and on this basis is the most important Buddhist temple in the world. According to the legend the statue came from India to Chiang Mai via Nakhon Si Thammarat which is an ancient city and the place where Theravada Buddhism, which is the current state religion of Thailand, was first practiced in Thailand. The other main theory is the statue was made by Lanna craftsmen, most likely as a copy of the real Phra Singh Buddha statue which is held at another temple. 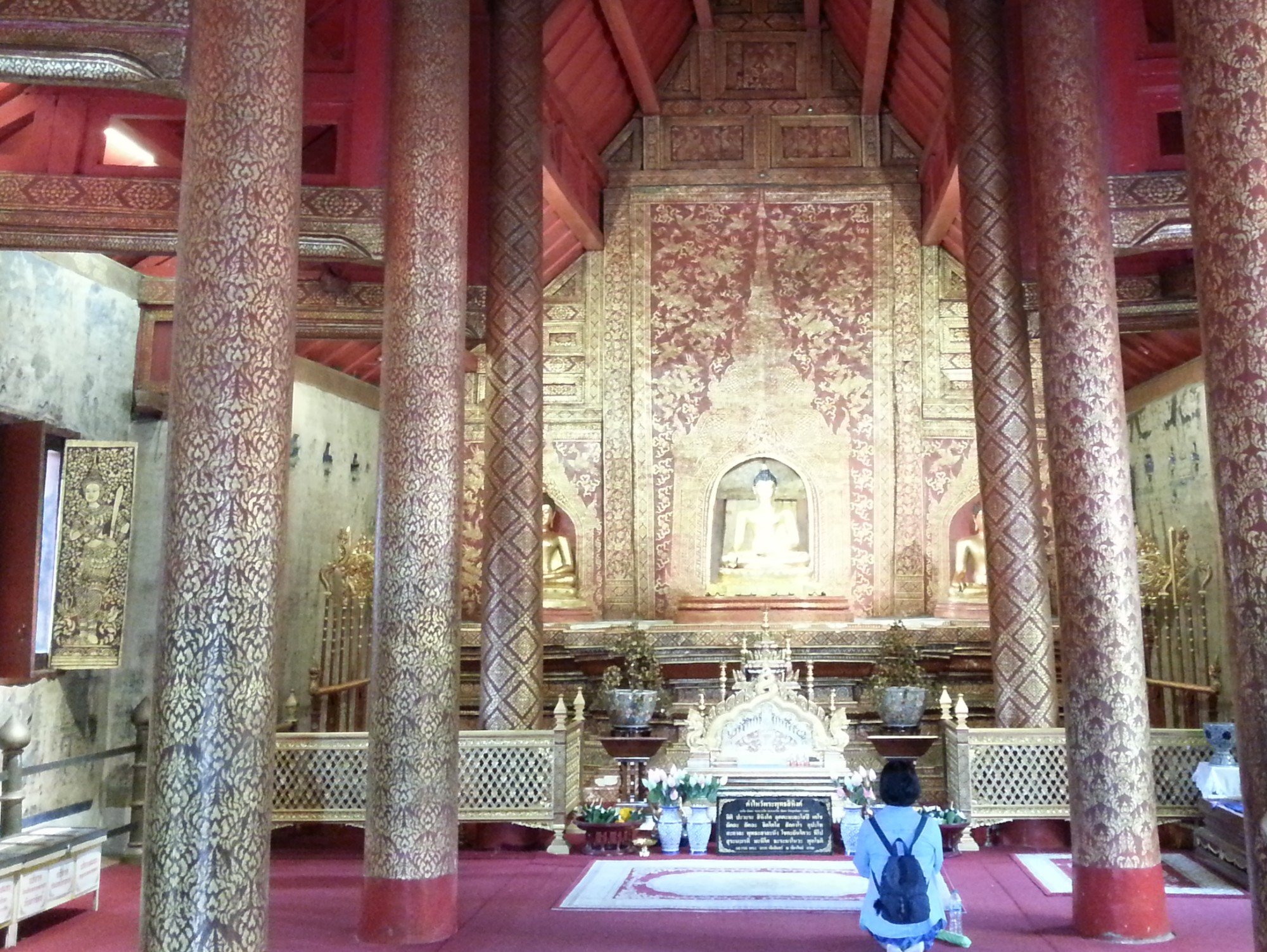 The largest building at Wat Phra Singh is its other prayer hall, Viharn Luang, which was built in 1925 as replacement for the original dilapidated prayer hall built in the 14th Century. The front of this massive structure is very ornately decorated in gold relief. 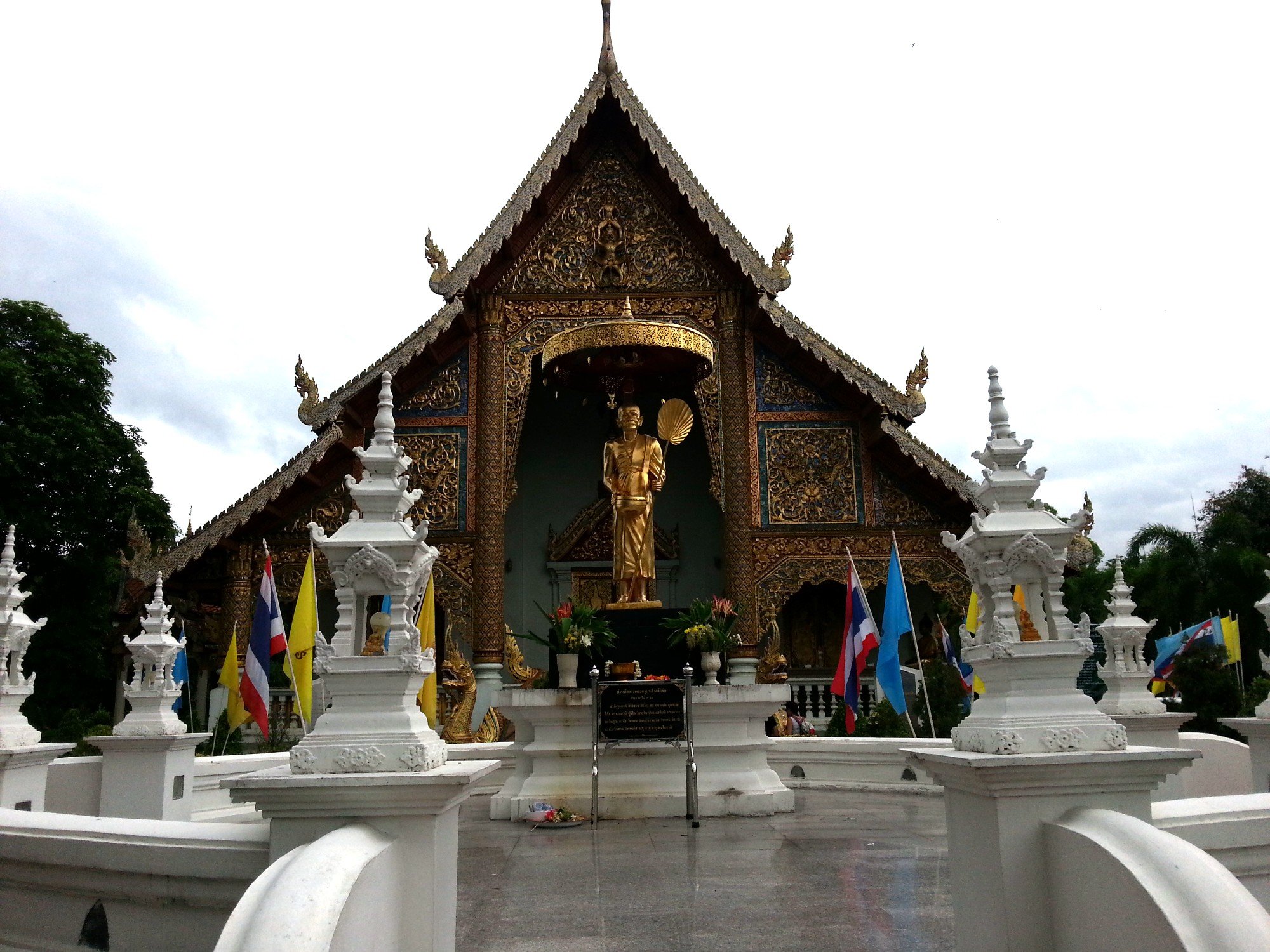 Inside the Viharn Luang there is a 15th Century Buddha statue, the Phra Chao Thong Tip. The origins of this statue are known. It was cast in 1477 in Chiang Mai. Around the statue are life sized models of important monks who lived at the temple which are so life like that at a glance visitors are likely to mistake them for rela live monks. 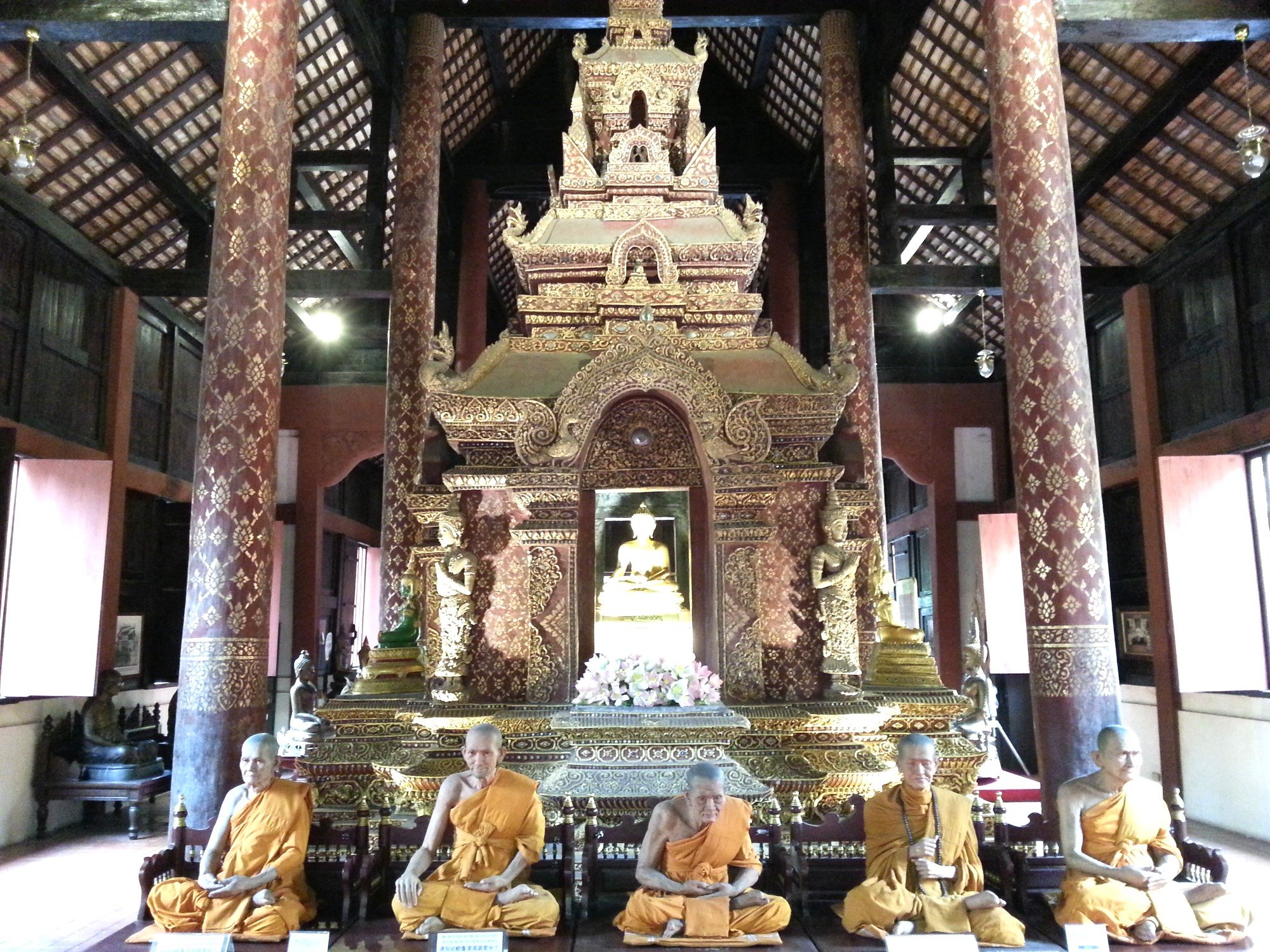 There are two other structures of note to see at Wat Phra Singh. One is its ordination hall, which is an ornate teak wood structure built in 1806. 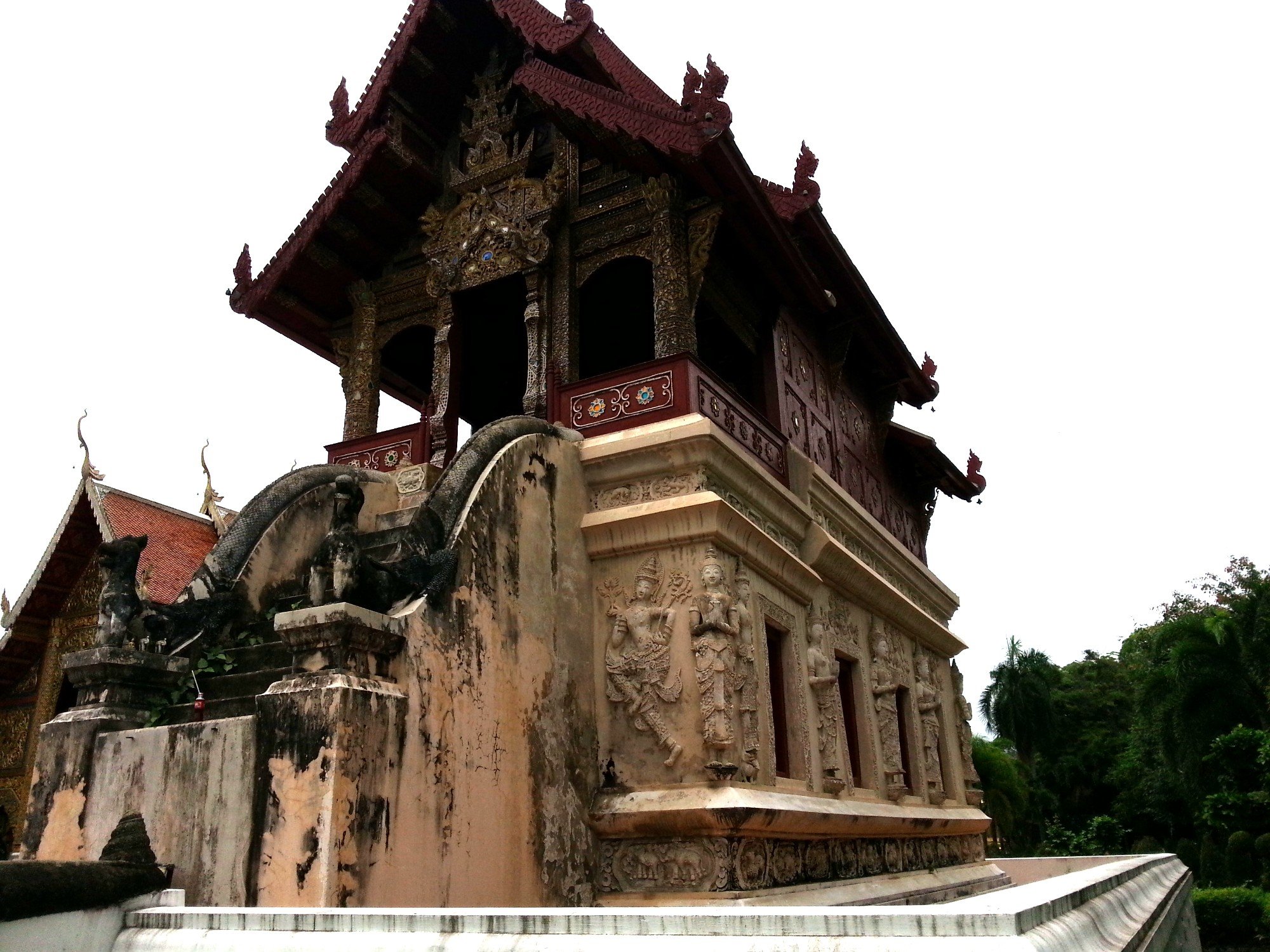 The other interesting building at Wat Phra Singh is its Ho Trai, or library, containing the Buddhist scriptures. The library building, constructed in the late 15th Century, sits on top of a large concrete base. The elevated position is intended to protect the delicate manuscripts from floods, rats and insects.

Next read about Travel from Chiang Mai to Chiang Rai