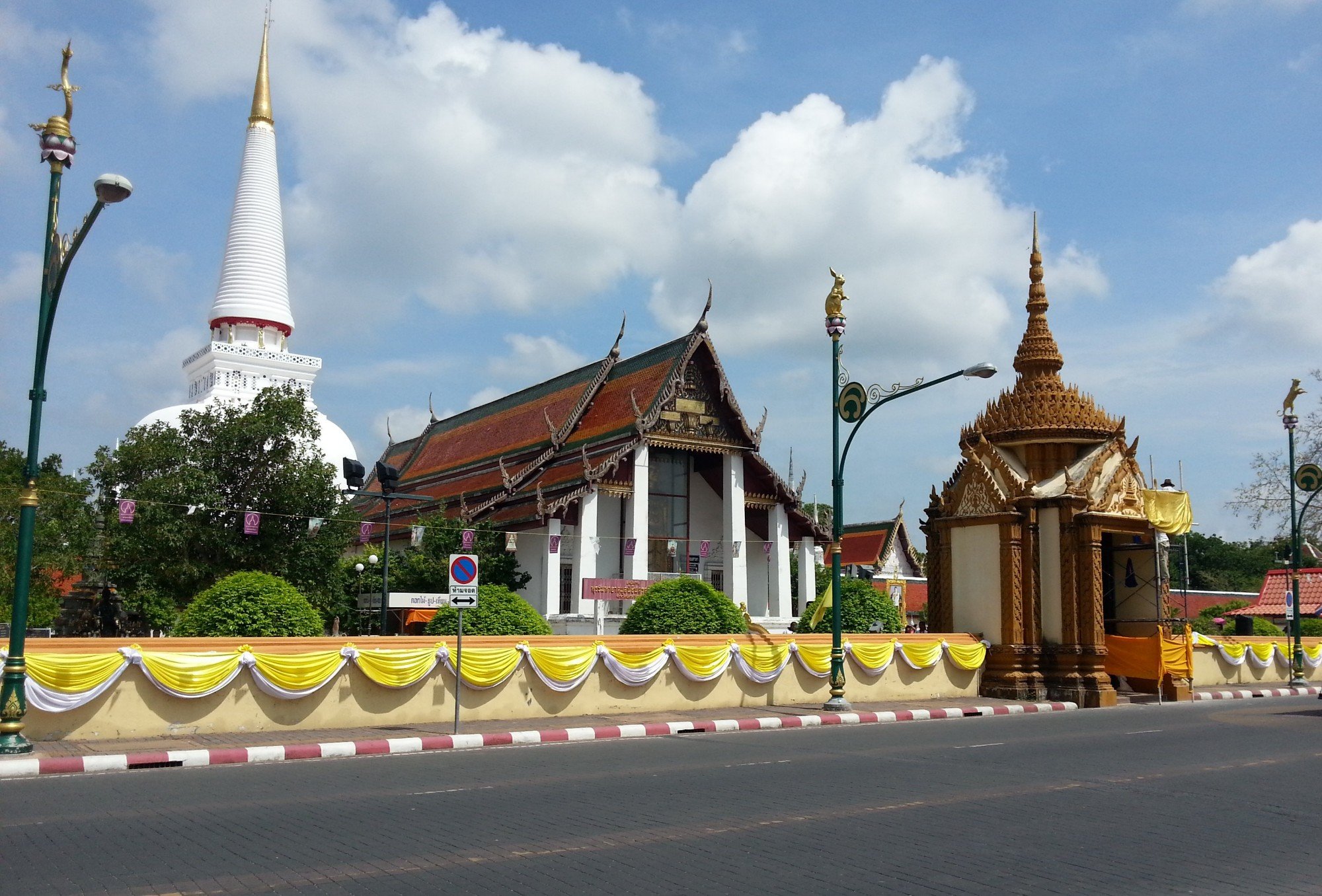 Wat Phra Mahathat is most famous for its large number of chedi, which are concrete spires common to Sri Lankan Buddhism which often contain holy relics. Wat Phra Mahathat is also historically important as one of the main temples from which the form of Buddhism now predominantly practiced in Thailand took hold as the main faith. Wat Phra Mahathat is well known amongst Thai people, but much less so amongst foreign visitors as Nakhon Si Thammarat is not a destination many tourists go to.

According to legend, the site where Wat Phra Mahathat is located was first used as a religious centre in 291 AD when Prince Thanakuman and Queen Hem Chala (also known as Queen Hemajala and Prince Donda Kumara) brought a tooth retrieved from the funeral pyre of the Lord Buddha to Nakhon Si Thammarat and built a small chedi within which it became enshrined. 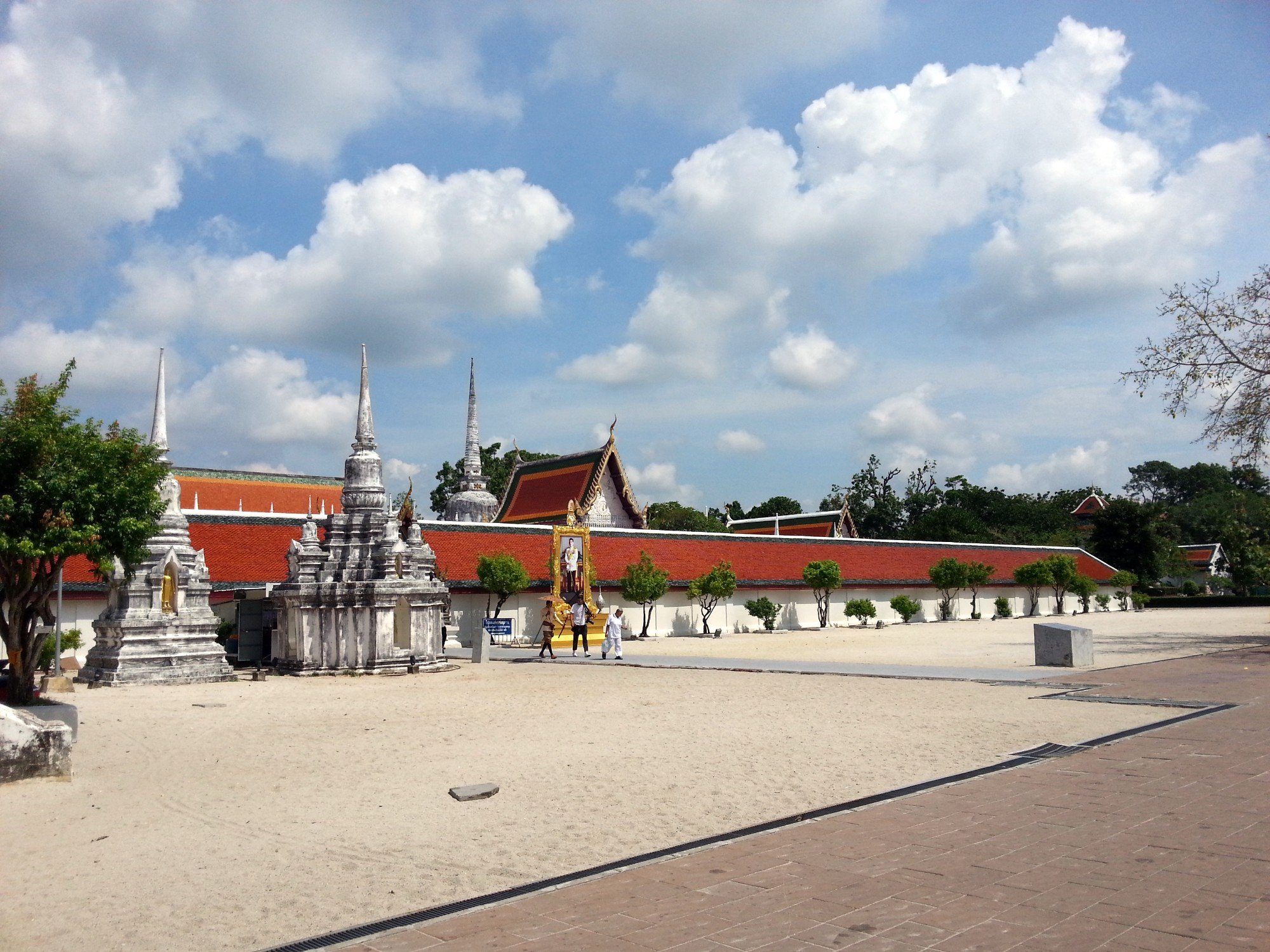 Wall around the chedi at Wat Phra Mahathat

The most famous feature of Wat Phra Mahathat is the Phra Borommathat Chedi, which is a 78 metre tall spire built in the Sri Lankan style in the early 13th Century by the new ruler of the province. Prior to that time the area was part of the Srivijaya Kingdom, whose rulers came from Sumatra. The construction of the chedi marked the establishment of Wat Phra Mahathat as a Theravada Buddhist temple, and a break with the Mahayana Buddhist beliefs of the Srivijaya Kingdom. 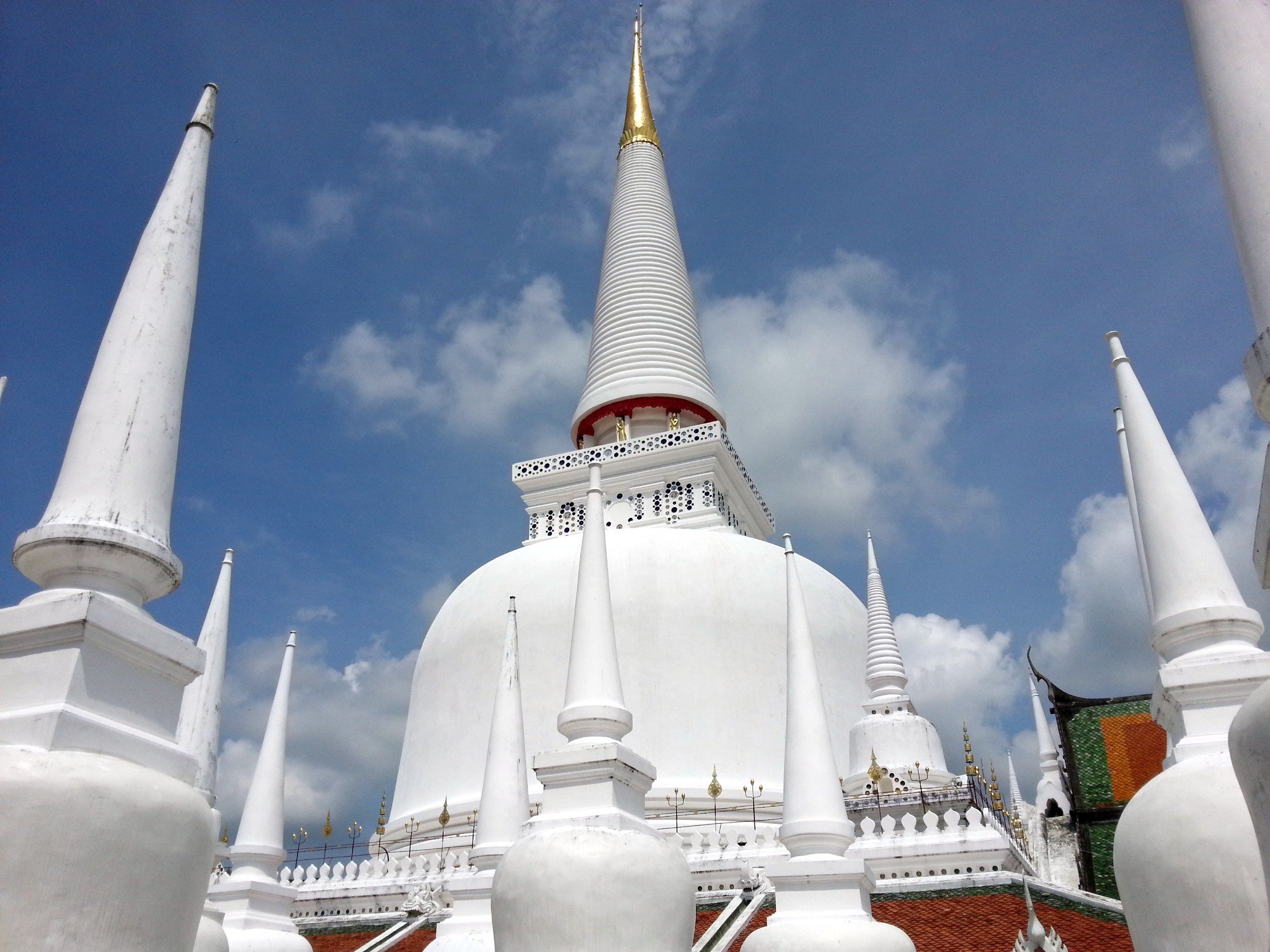 The main chedi at Wat Phra Mahathat is a spectacular and elaborate construction. The bulbous base of the spire, possibly shaped to be very wide in order to completely cover the chedi which was originally constructed there in 291 AD, is ringed by elephant statues. Between the top of the base of the chedi and the start of the narrow spire are 8 Buddha statues signifying the 8 practices which Therevada Buddhists believe need to be followed to achieve enlightenment. The top ten metres of the chedi is covered with other 600 kilogrammes of gold with precious stones inset within the golden pinnacle of the spire. 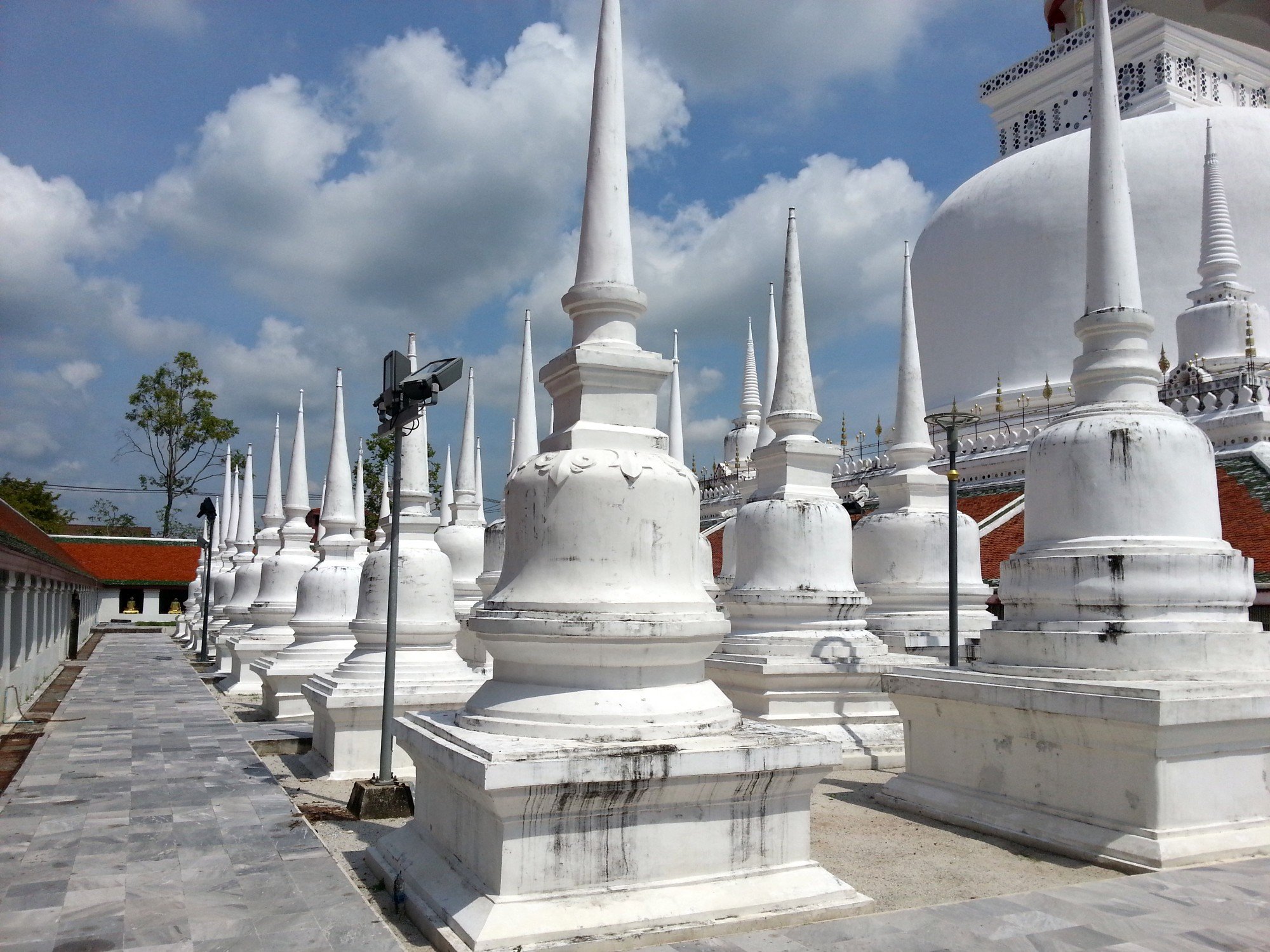 The main chedi at Wat Phra Mahathat is located within a walled compound which also contains 173 smaller chedi arranged symmetrically around the Phra Borommathat Chedi. Some of these smaller chedi are scale models of the larger chedi. This clustering of chedi is unique in Thailand but bears similarities to Buddhists temples in other South Asian Countries such as the Kakku Pagodas in Myanmar. 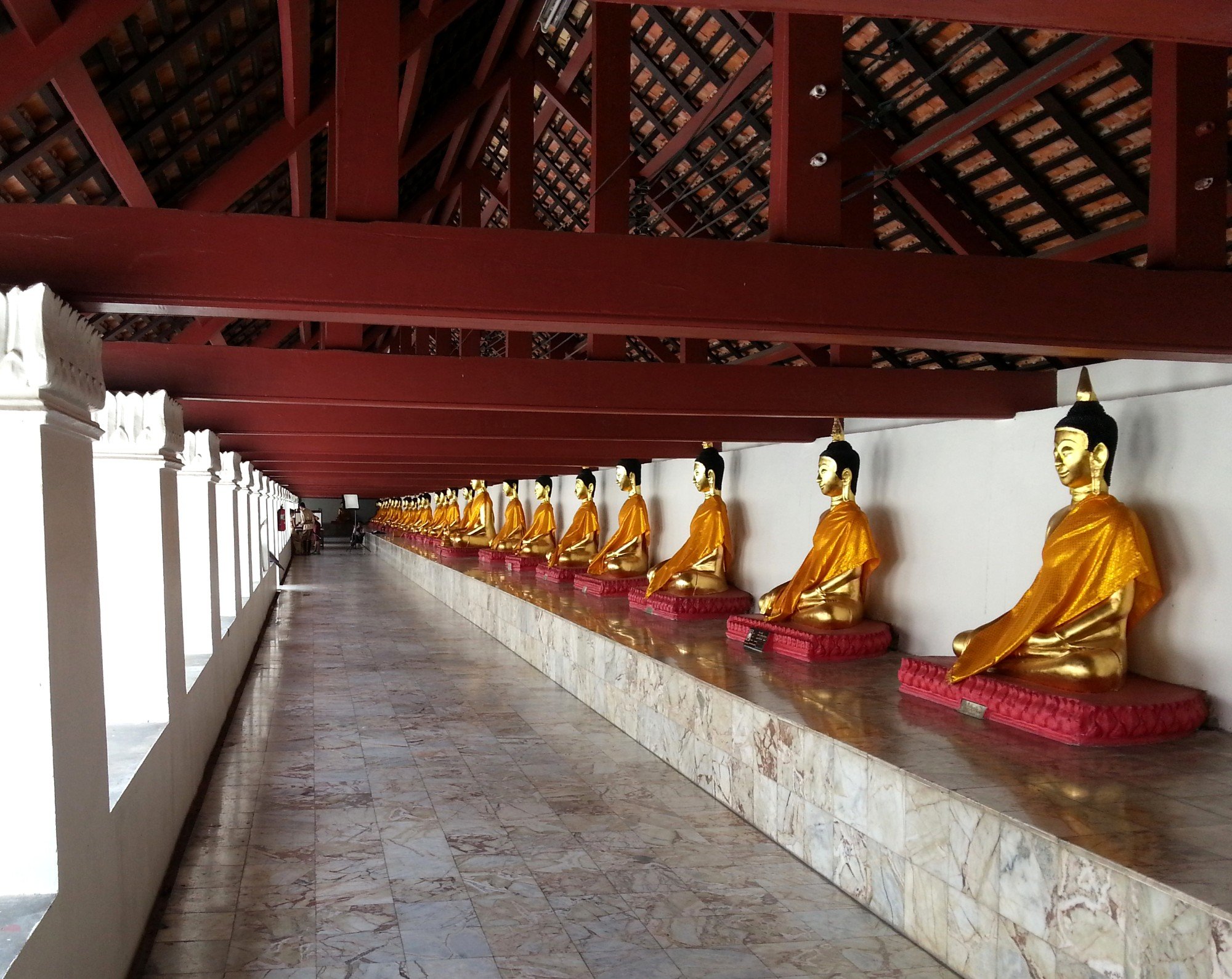 On the inside of the wall surrounding the chedi at Wat Phra Mahathat are roofed cloisters. Hundred of Buddha statues are sat in lines within these cloisters facing the chedi. 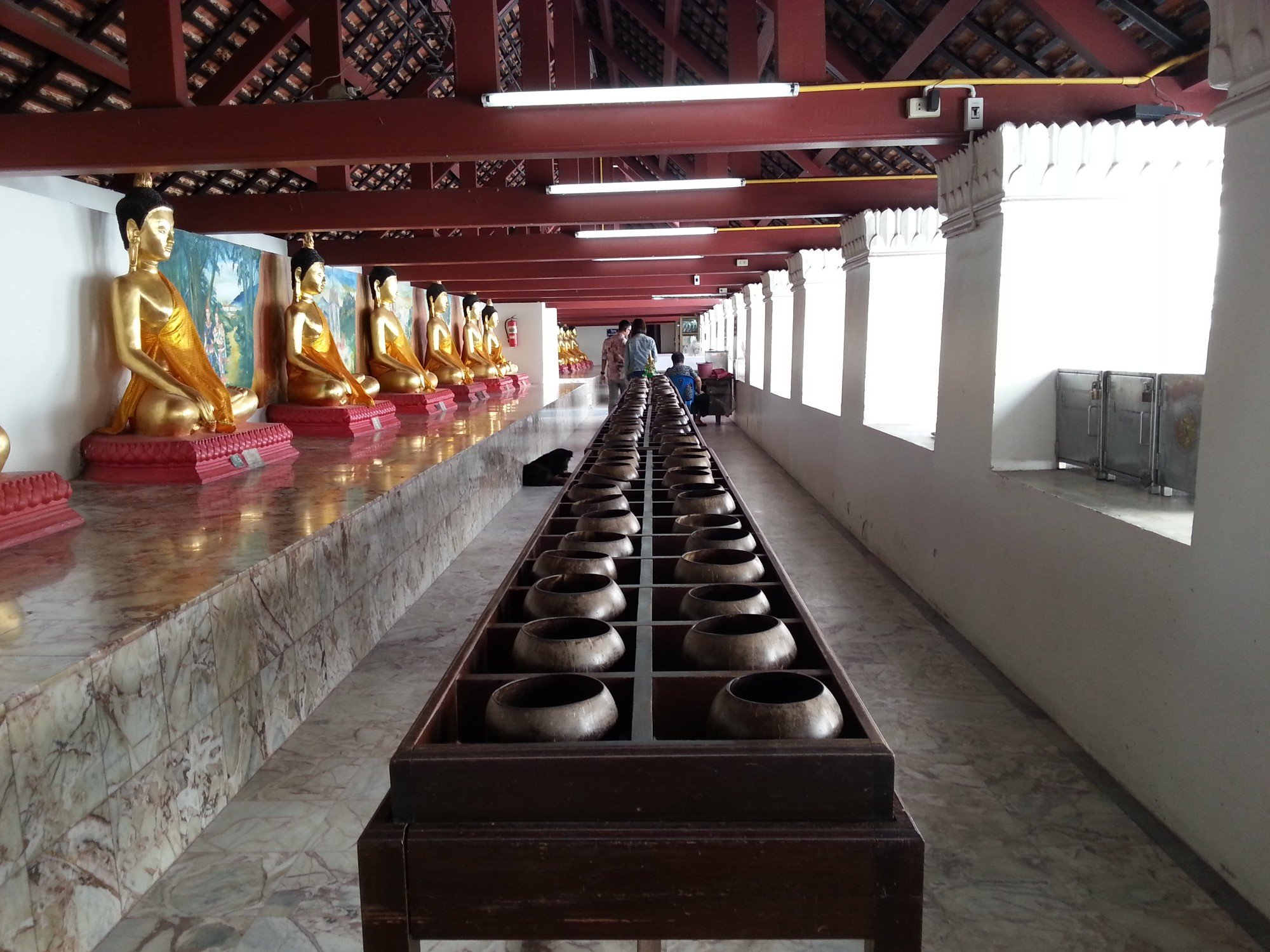 The cloisters are well worth exploring as they contain other curiosities in addition to the Buddha statues. There is a small museum in a room off the cloister, an enormous backbone of a whale in a glass box, and 108 coin jars where the faithful drop coins one by one in act of thoughtfulness to attain merit. 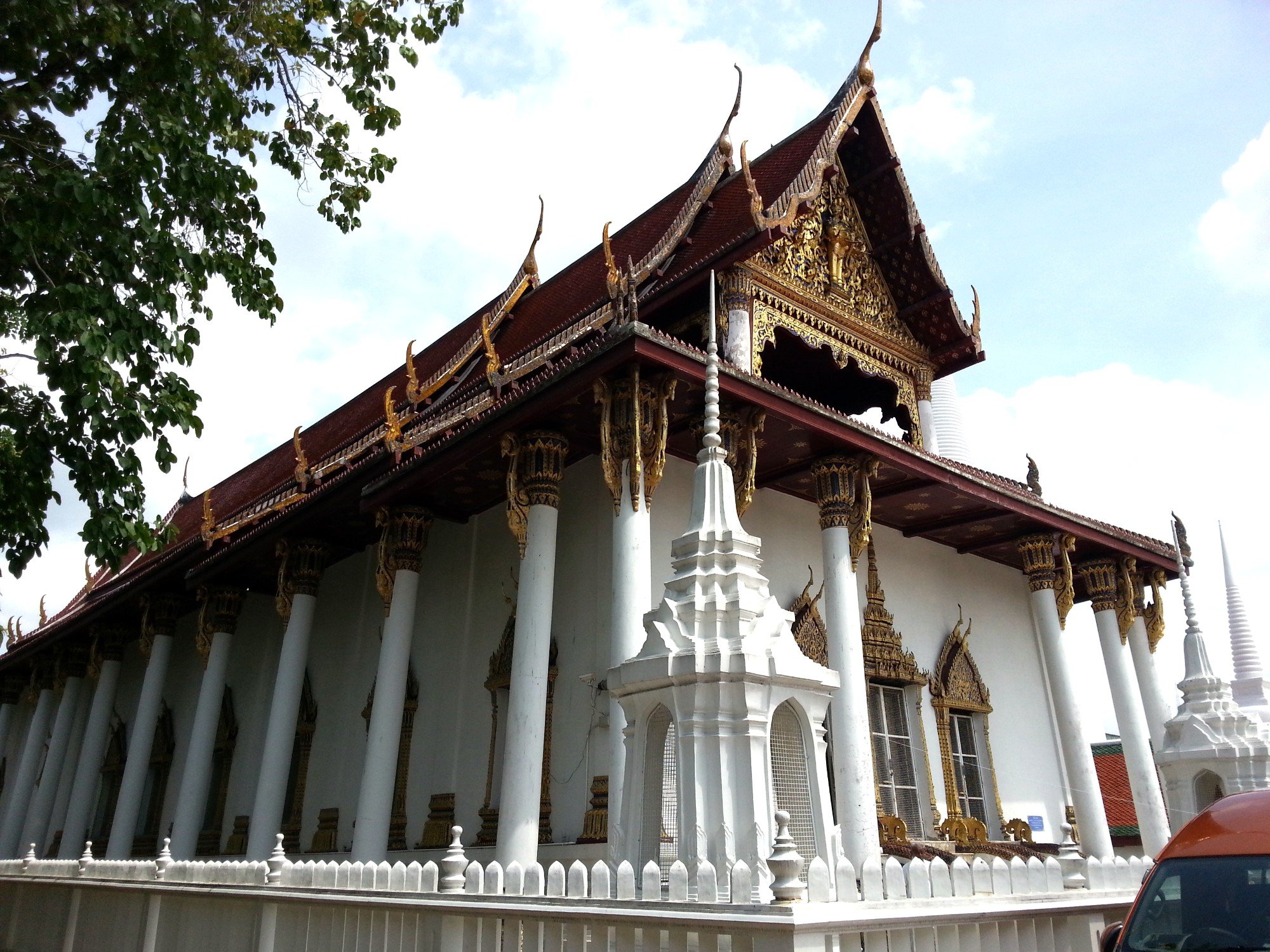 The other major feature of Wat Phra Mahathat is its large ubosot, or ordination hall, built in 1628. The ordination hall is built in a style which was common to the Ayutthaya Kingdom which ruled over Thailand during that period. Distinctive features like inward slanting supporting columns make the ordination hall one of the best intact examples of the Ayutthaya style of architecture in Thailand, particularly as nearly all the temples in Ayutthaya itself were destroyed by invaders from Myanmar in 1767. 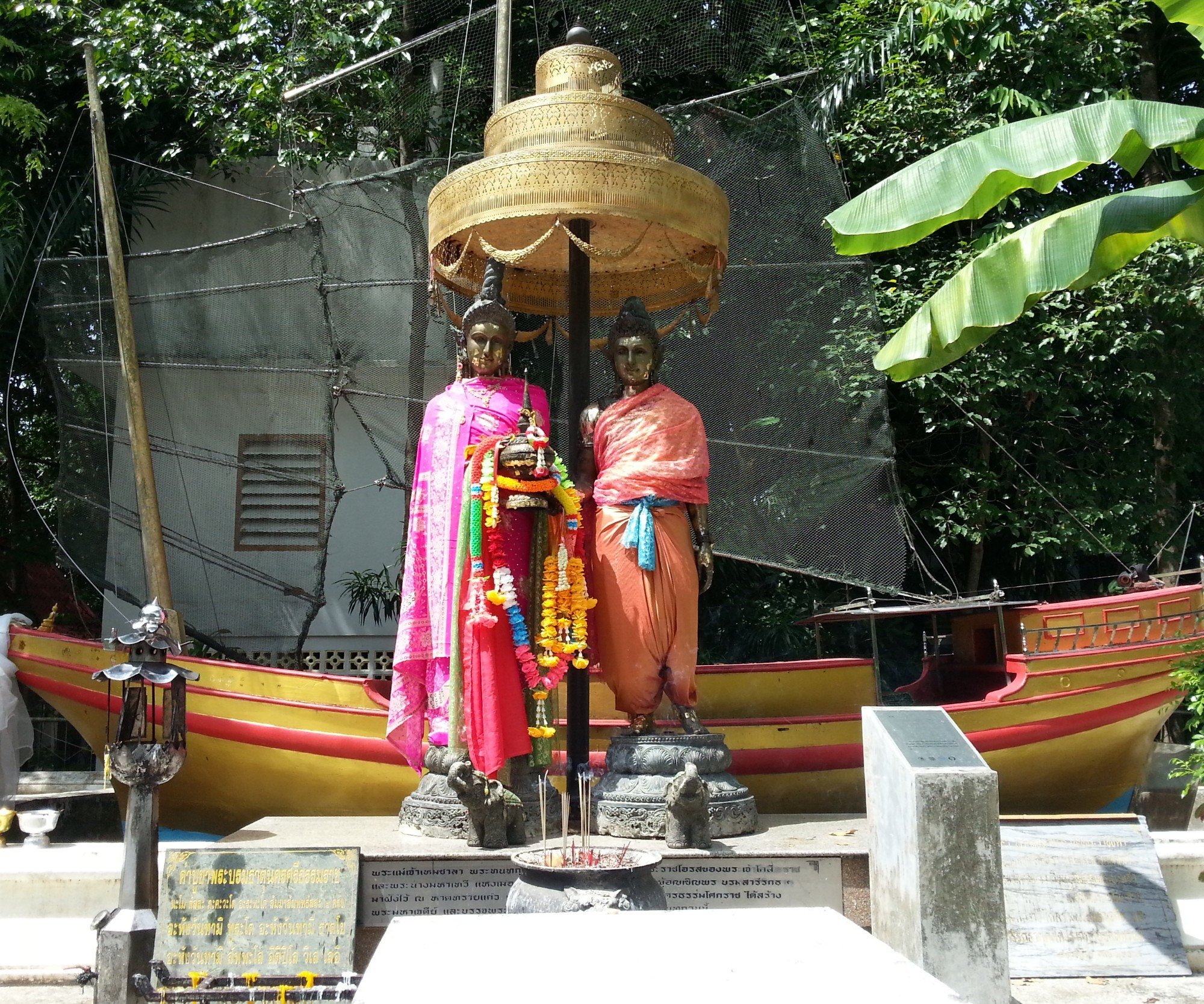 Clues as to the ancient history of Wat Phra Mahathat, which is the subject of much academic debate and are not known for sure, as to be found in the shrines to the side of the ordination hall. There are several pairs of very old statues which, although labelled as being of specific rulers, princes, princesses, and king and queens, could represent a wide range of different historical figures or perhaps Hindu deities and fit several different competing theories of the origins of this very old temple.

Next see Flight times from Bangkok to Nakhon Si Thammarat