Wat Khuha Sawan is a very old temple established during the Ayutthaya Period (1350 to 1767) which is located near the centre of Phatthalung, in Southern Thailand. 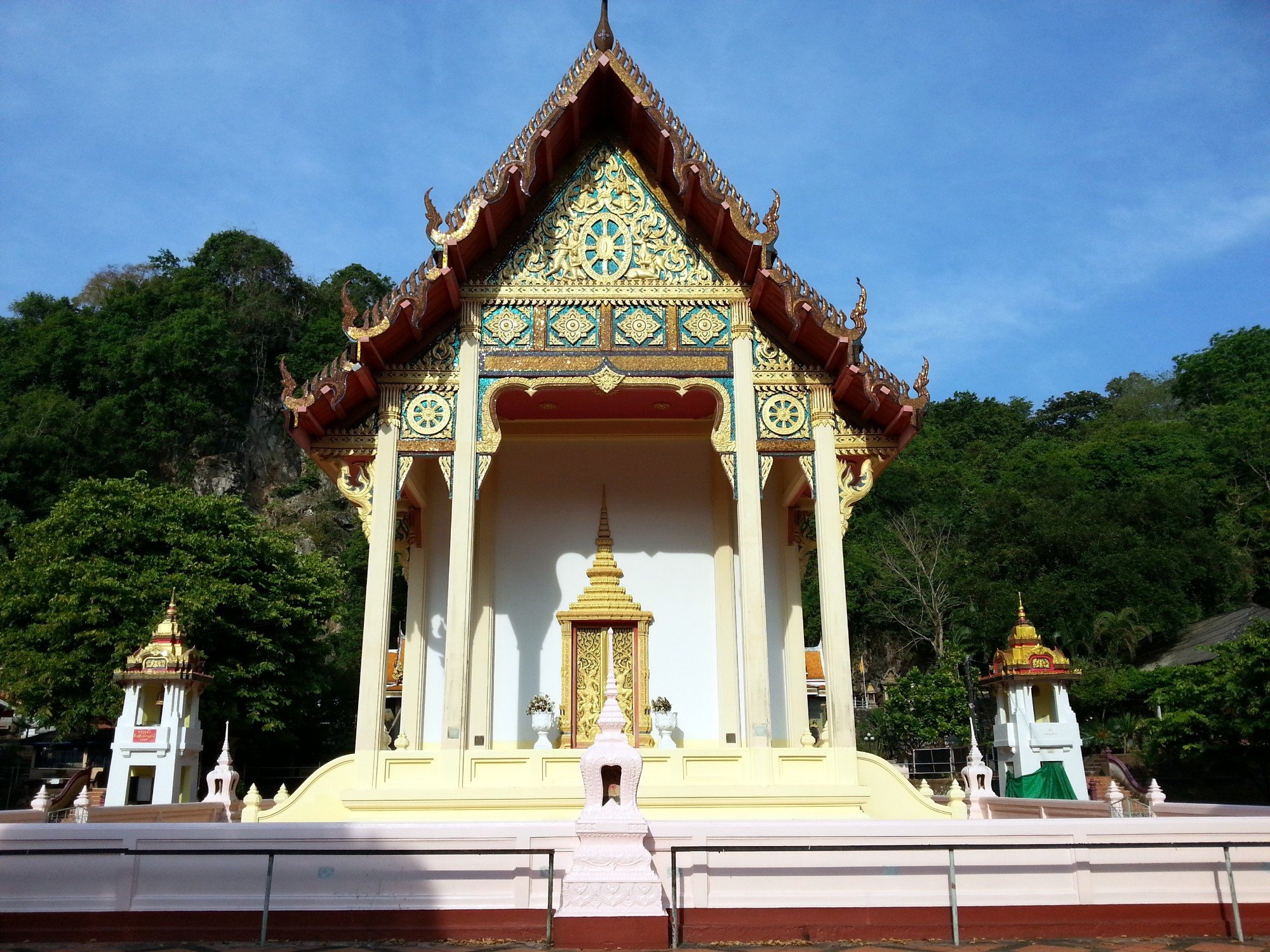 Wat Khuha Sawan is the oldest and most important temple in Phatthalung, and the first temple in the province to be granted royal status. 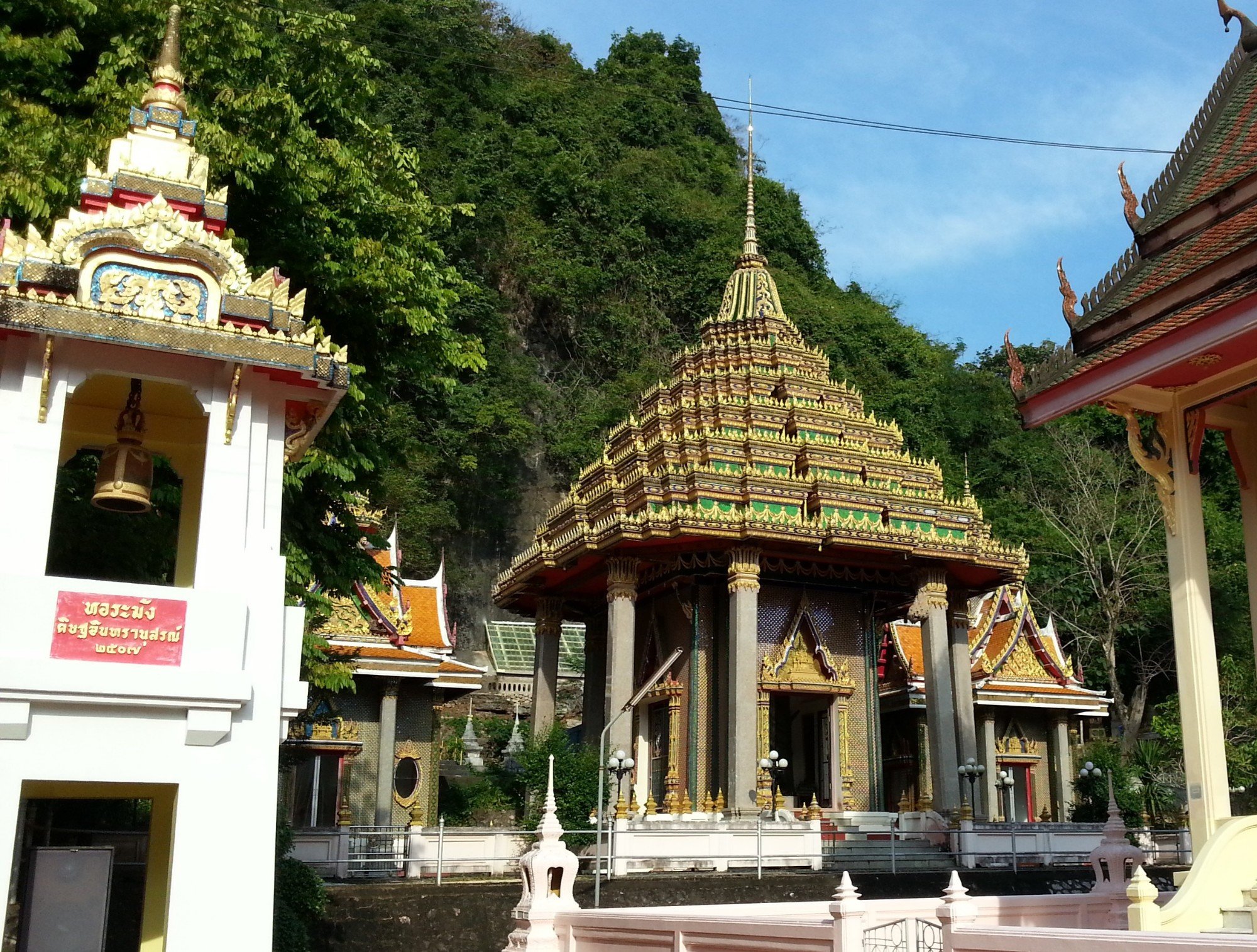 Entering Wat Khuha Sawan via the main entrance on the Khuha Sawan Road the first thing you see is Nang Khlot Cave, which is a small cave with some very old shrines amongst the roots of several large banyan trees and is home to lots and lots of monkeys. 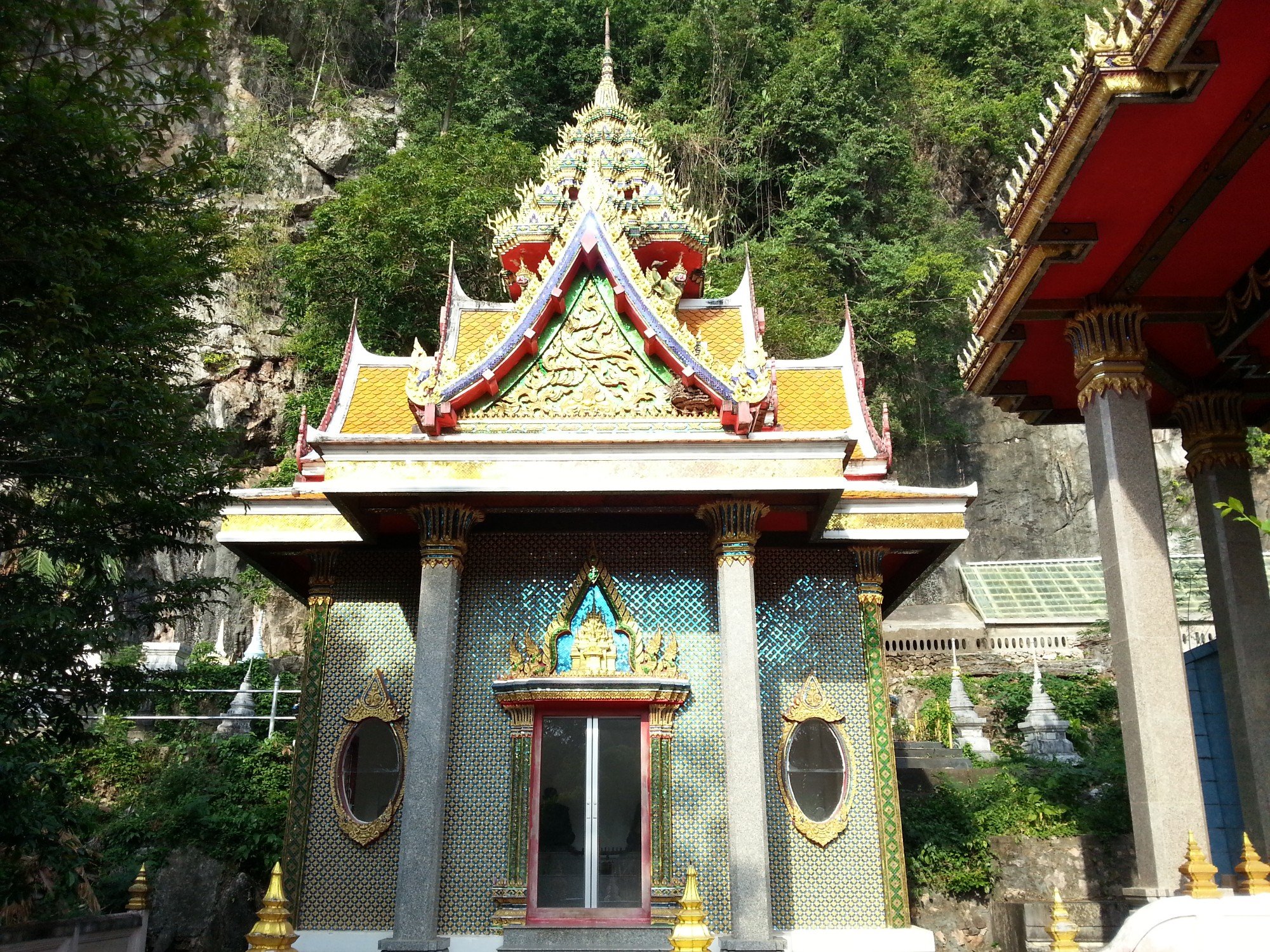 A short way after Nang Khlot Cave you come to Wat Khuha Sawan itself. The main part of the temple is a flat area with a medium sized ordination hall. The more interesting structure, and the one which is generally shown in tourist brochures of the area, is the elaborate chedi with green multi-tiered roof. There is also an attractive small shrine hall containing holy relics. 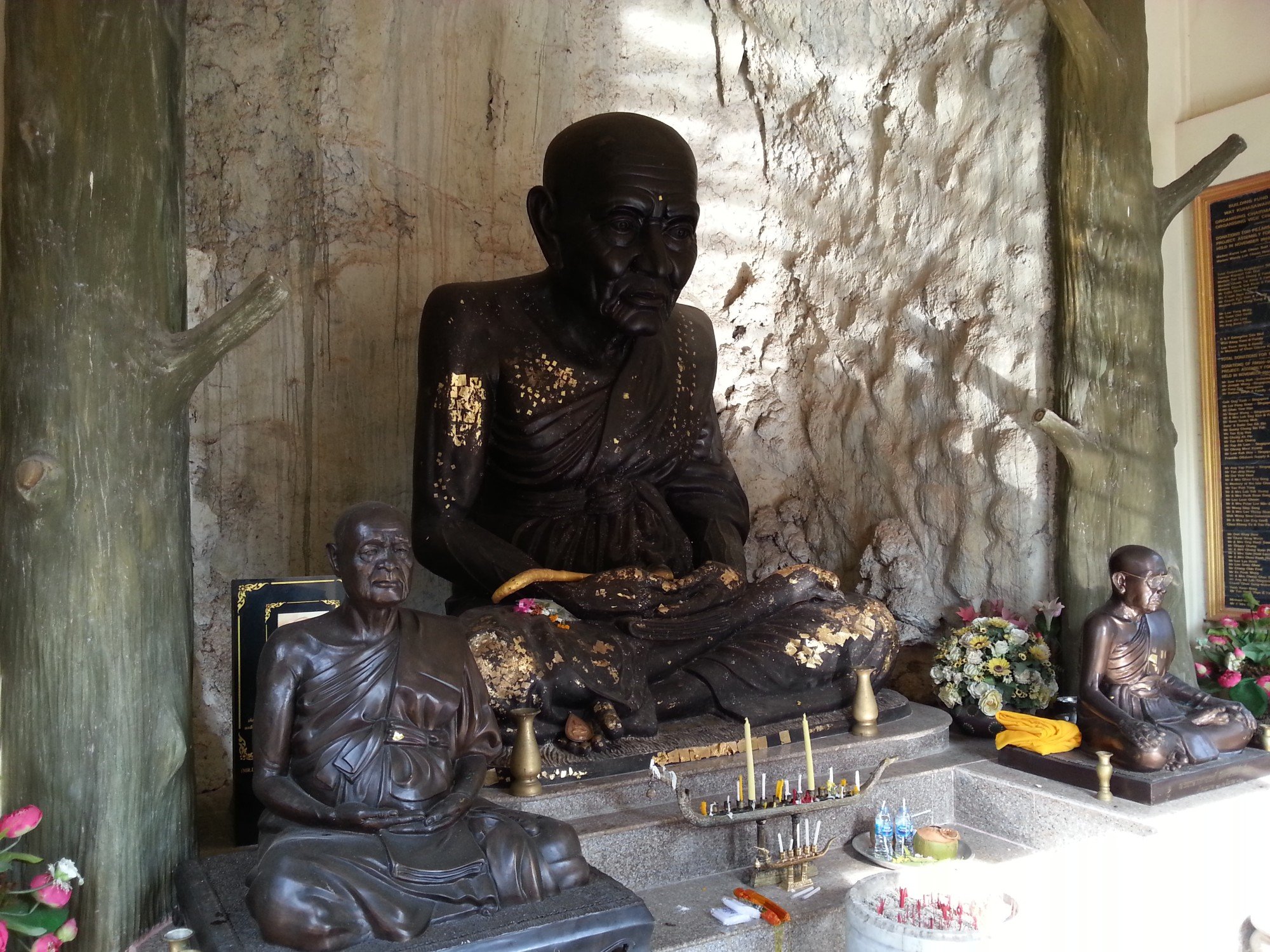 Behind the area with the main structures are the more interesting and famous parts of Wat Khuha Sawan are located. Behind the ordination hall is a cemetery, and behind that is Khuha Sawan Cave, which is series of caves over three levels. In the largest cave at ground level there are lots of statues and the signatures of several Kings and other members of Thailand’s Royal Family who have visited the cave. 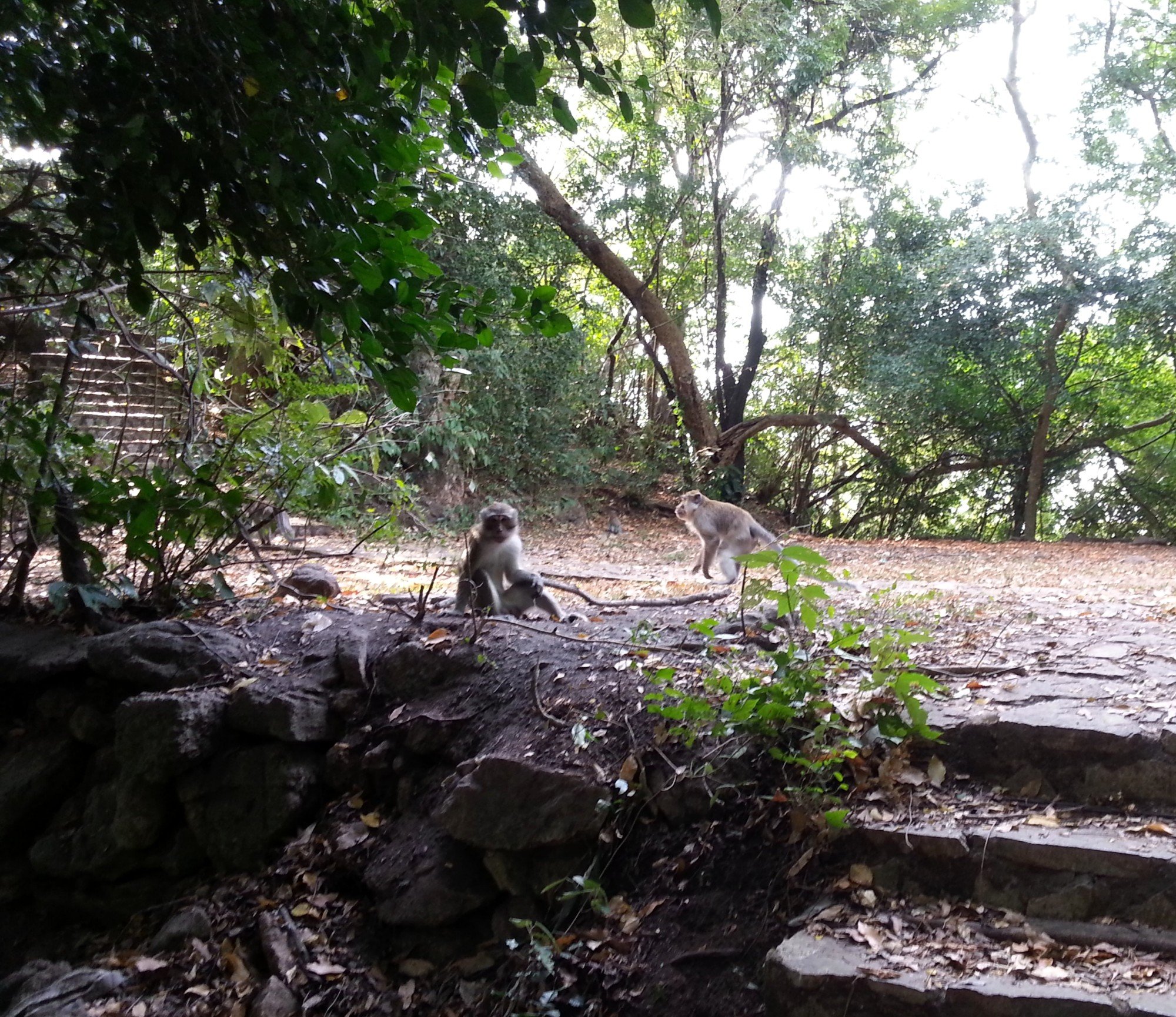 Monkeys on the hill above Wat Khuha Sawan

Continuing up the hill beyond Khuha Sawan Cave you come to an old stone staircase. The staircase looks rarely used as the path is overgrown. The other obstacle is the large numbers of wild monkeys on the hillside. I tried to keep my distance from these monkeys as there were a lot of them. although this was slightly difficult as they were standing on the path and were reluctant to move as I walked up the hill. 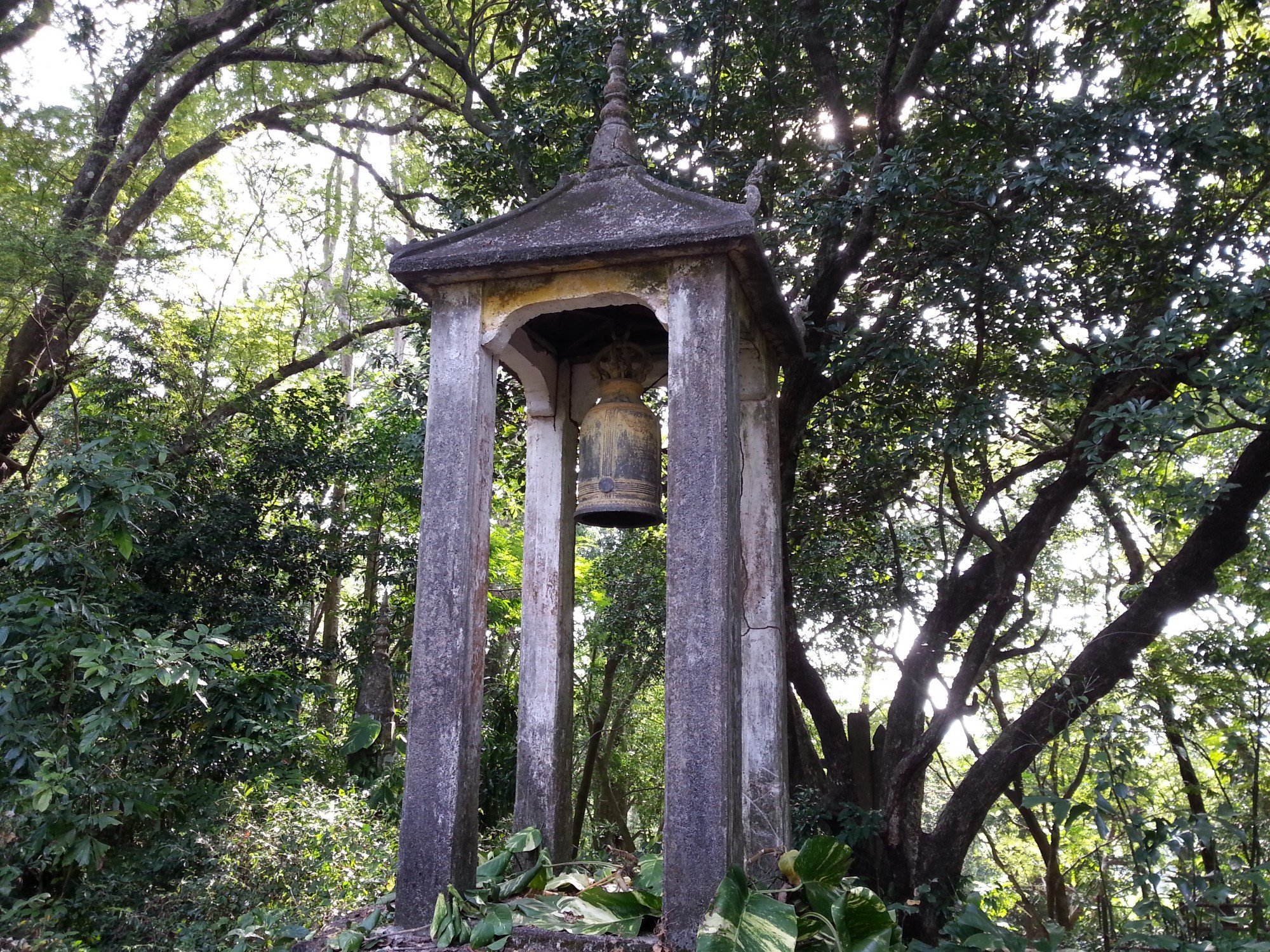 At the top of the first flight of stone stairs is a clearing with a very old looking bell tower and a small shrine hall. It is difficult to date exactly how old these structures are. Artefacts have been found at Wat Khuha Sawan which suggest that the site has been used as a place of worship from as far back as the 8th Century to the early days of Buddhist worship in Thailand. 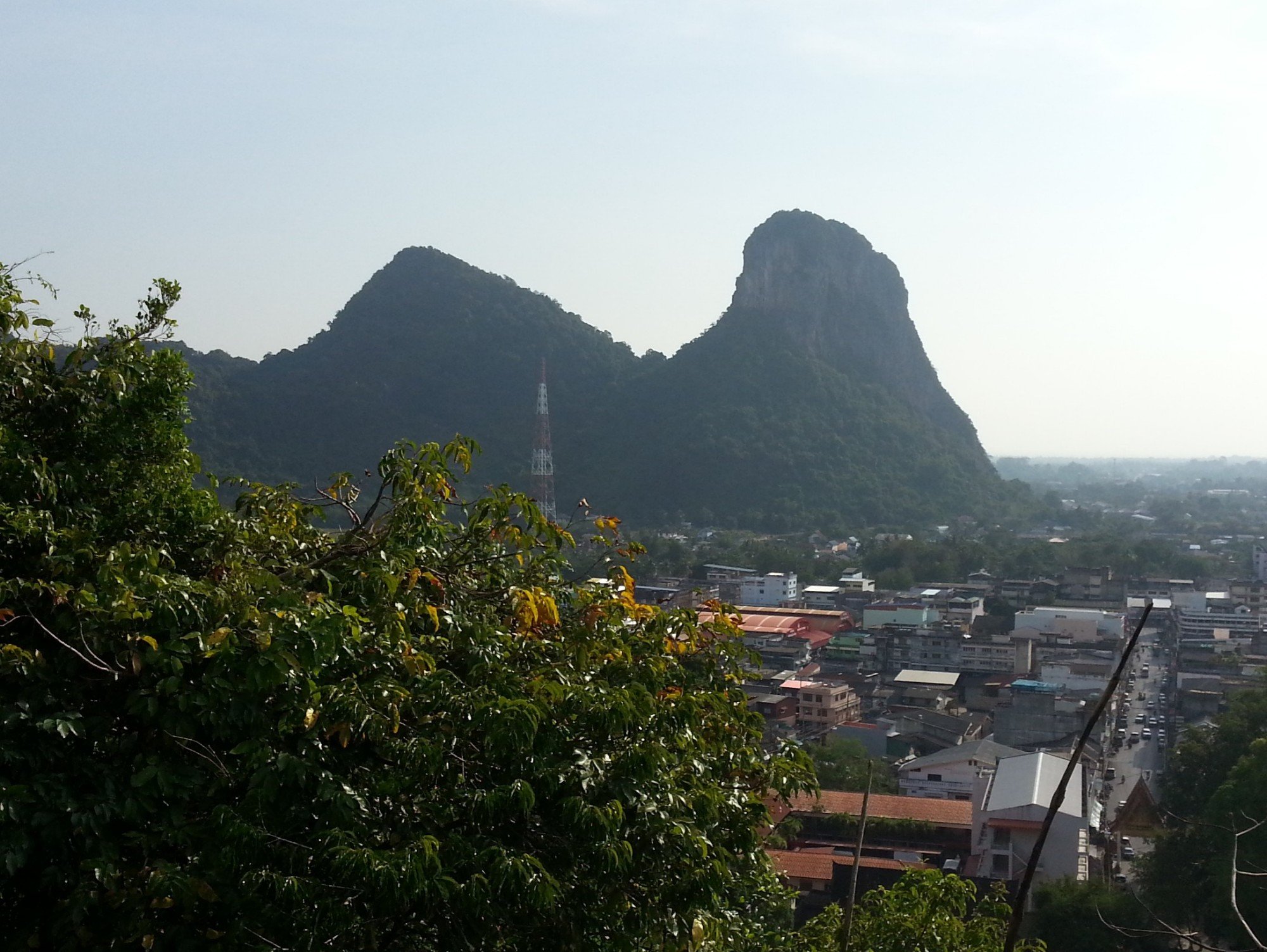 A second flight of stone stairs, past even more largely disinterested monkeys, takes you an outcrop on the hillside with a view of the town and the jaggedly shaped Khao Ok Thalu, which rises majestically from an otherwise flat landscape. 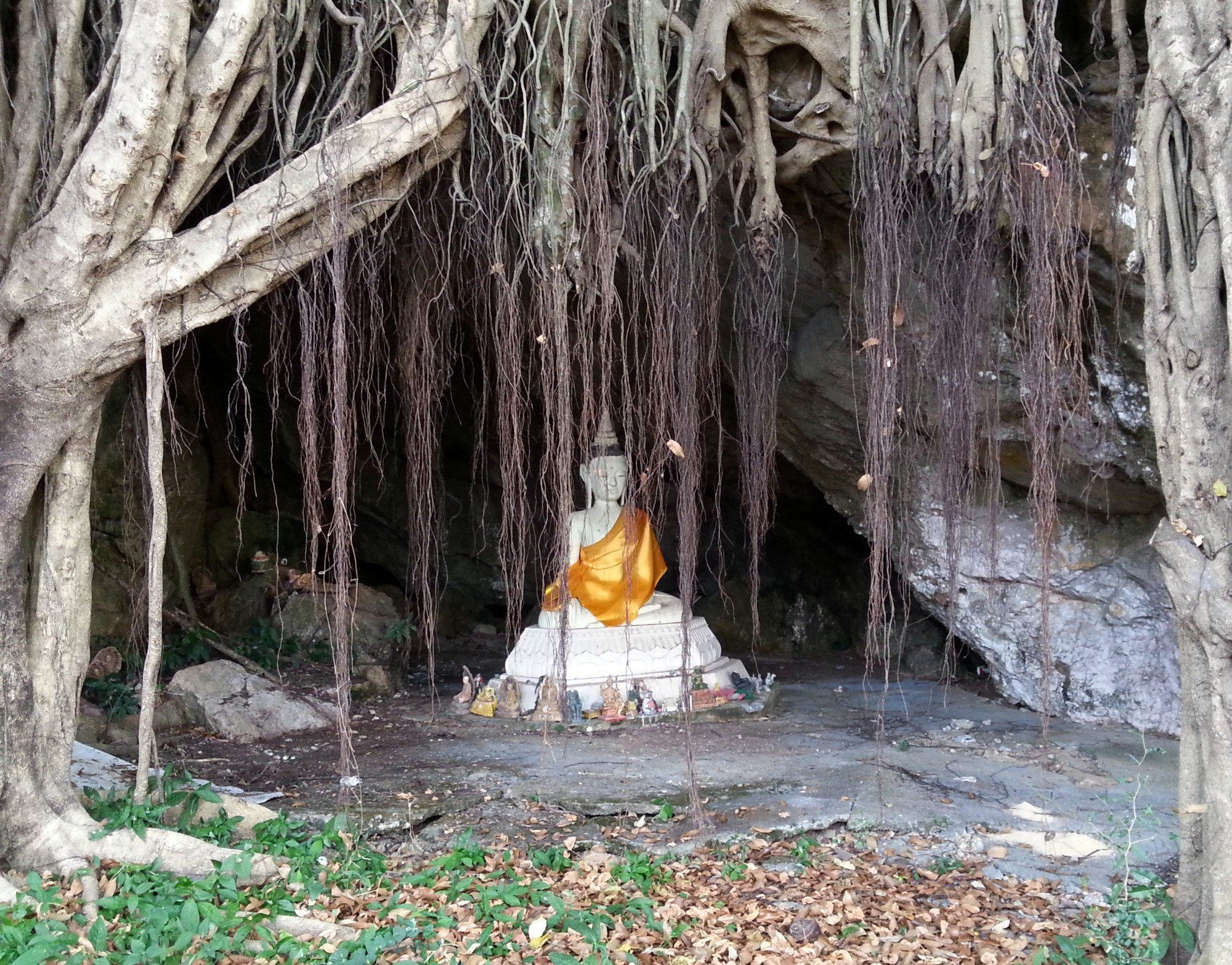 Cave shrine at the rear of Wat Khuha Sawan

As you exit from the rear of Wat Khuha Sawan there are two more points of interest. One is a bell shaped chedi which looks as though it is several hundred years old and the other is a small cave with a Buddha statue inside and lots of sleeping bats hidden in the recesses of the back of the cave waiting for sunset to fly out and feast on the town’s insect population.

Next read about Wat Xieng Thong