Wat Jet Lin is one of over 70 Buddhist temples in Chiang Mai city and receives relatively few visitors in comparison to more famous temples such as Wat Phra Singh and Wat Chedi Luang. 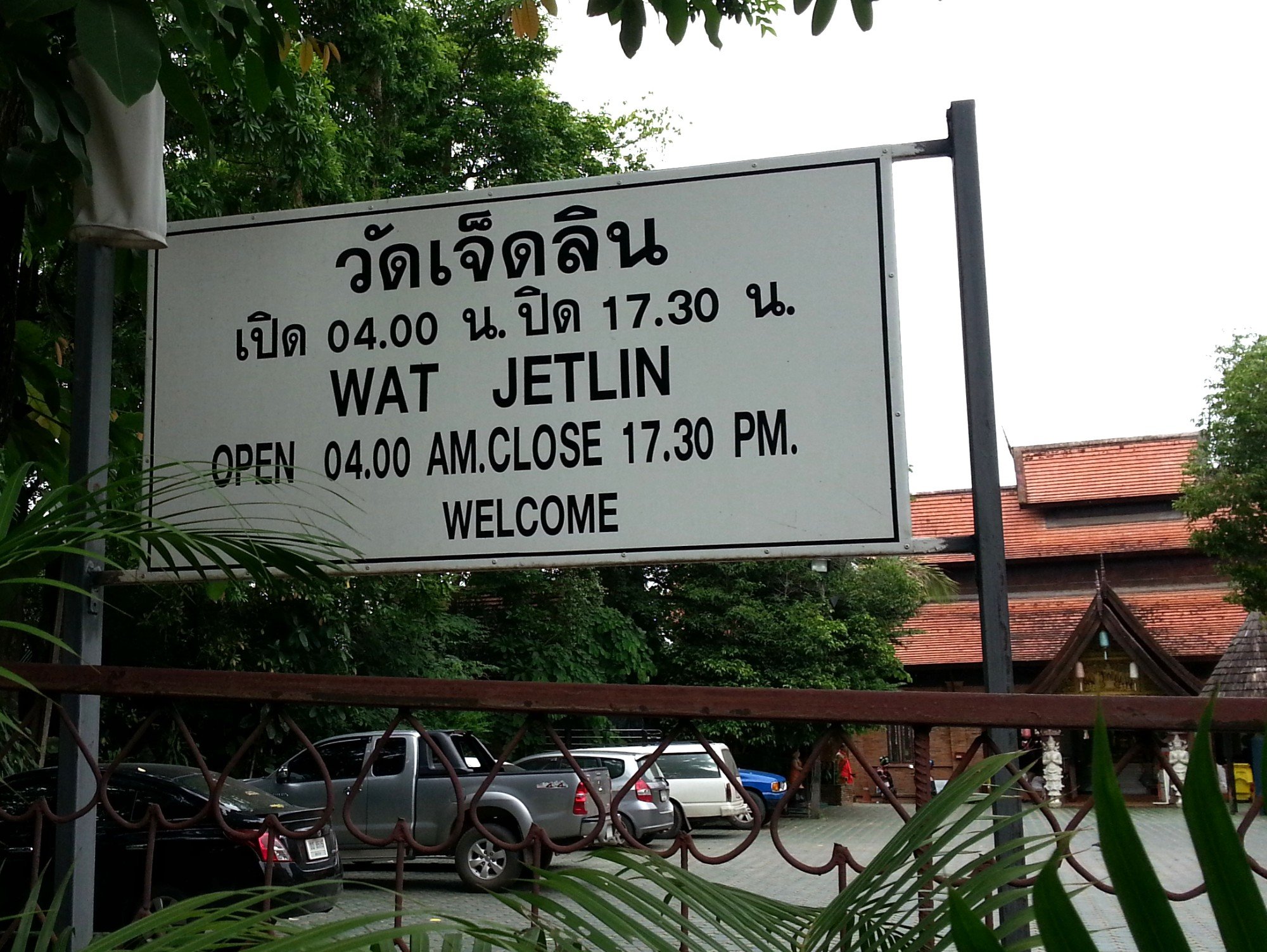 Wat Jet Lin was established at some point in the early 16th Century. The major event which took place at Wat Jet Lin was the coronation of the Lanna King Mekut Sutthiwong in 1551. The name Wat Jet Lin means the ‘Temple of the Seven Channels’ and refers to 7 water channels under which, according to the only written historical record of the temple that exists, members of the Lanna Royal Family used to come to the temple to bathe under. 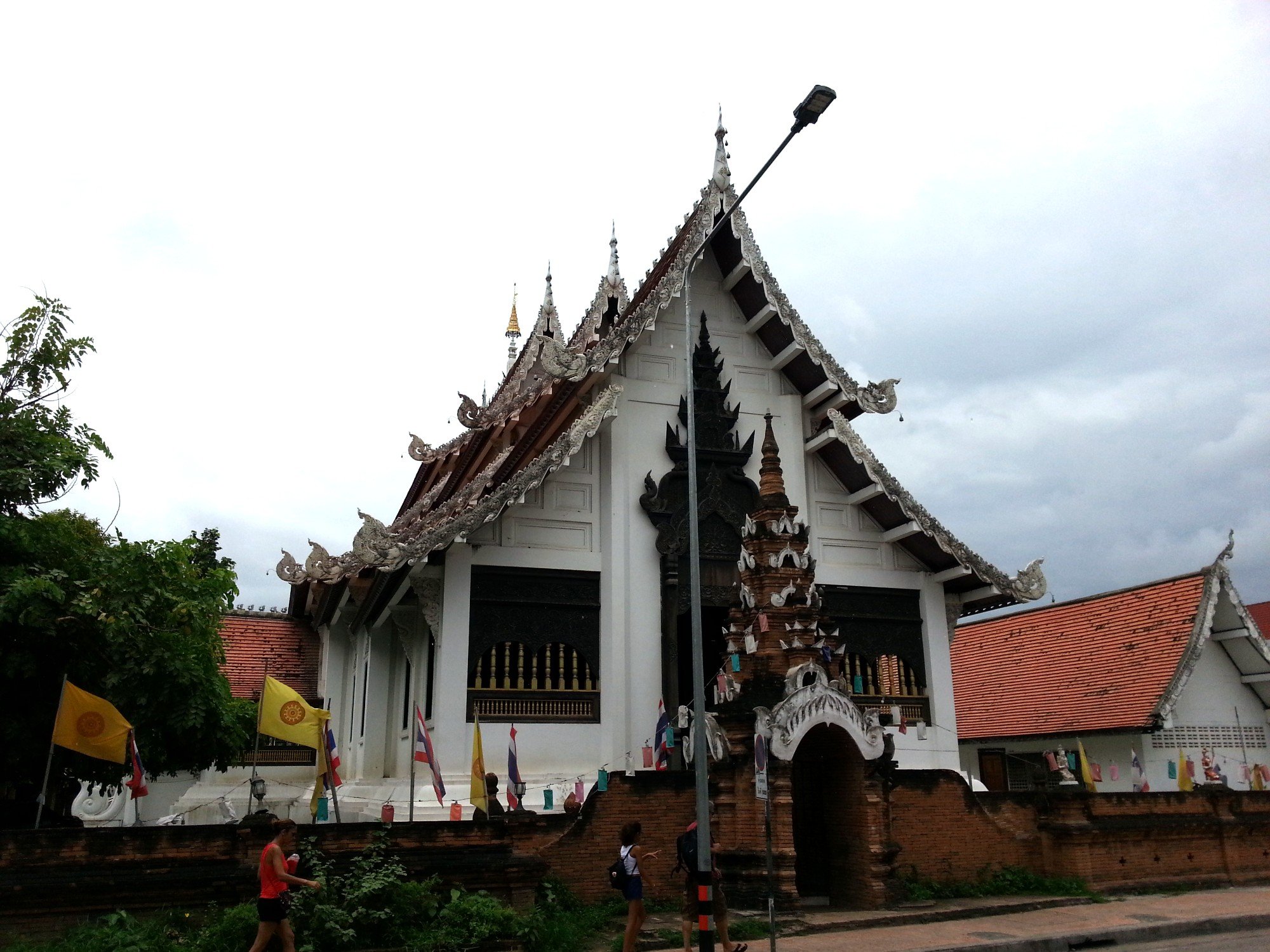 The main building at Wat Jet Lin is its prayer hall which features a distinctive Lanna style tiered roof. The prayer hall looks as though it was constructed in the late 19th Century or early 20th Century. At the time Wat Jet Lin was founded temple buildings were being constructed from teak wood so the greater likelihood is that the original prayer hall perished and got replaced by the current concrete structure as, by that time, building with teak wood had become a lot more expensive. 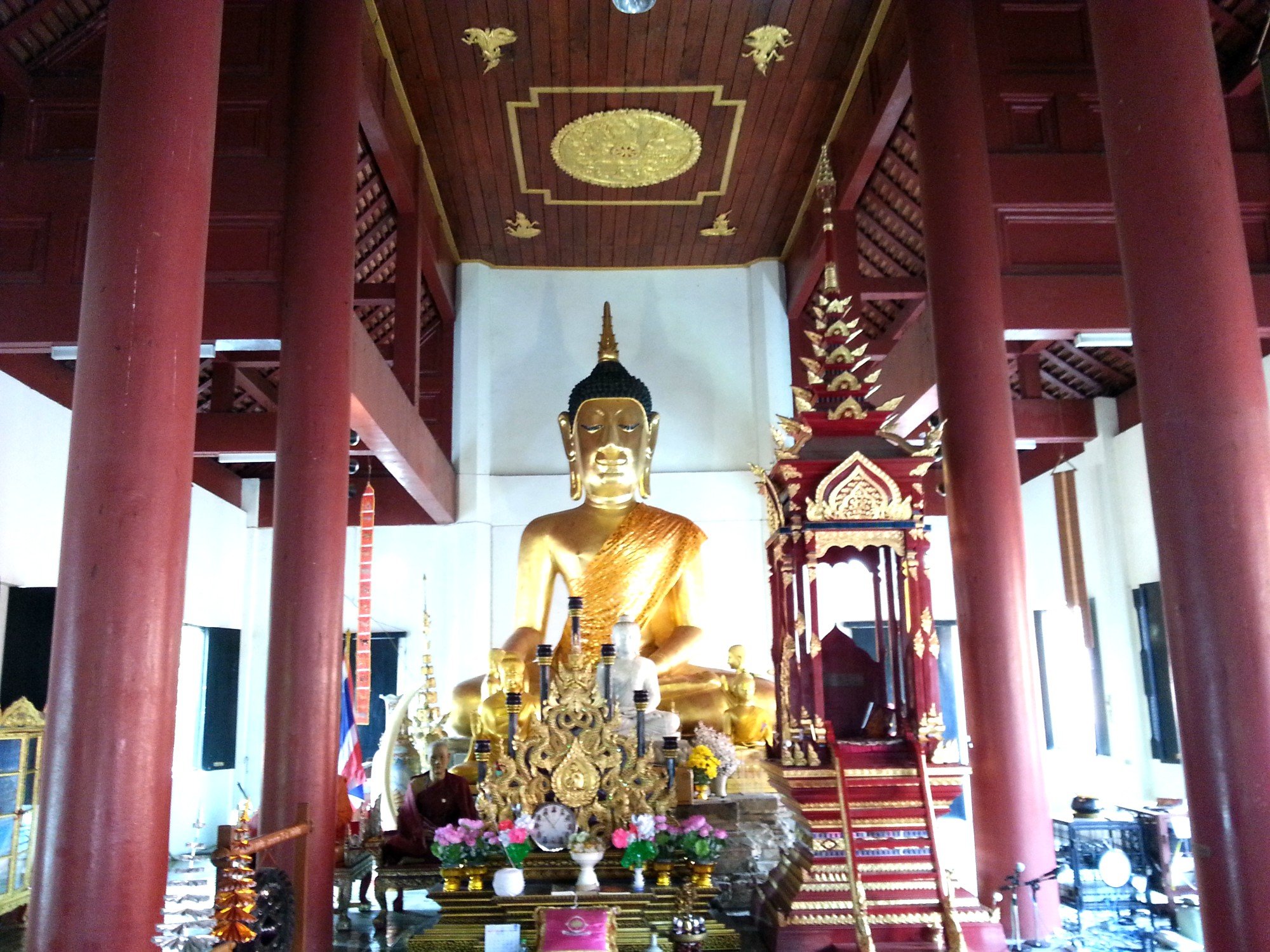 Inside the prayer hall at Wat Jet Lin

The inside of the prayer hall Wat Jet Lin is plainly decorated with white walls with unadorned red supporting columns. The shrine in the prayer hall features a cluster of Buddha statues. In front of the large golden Buddha statue is a smaller and more beautiful jade statue of undocumented origins. 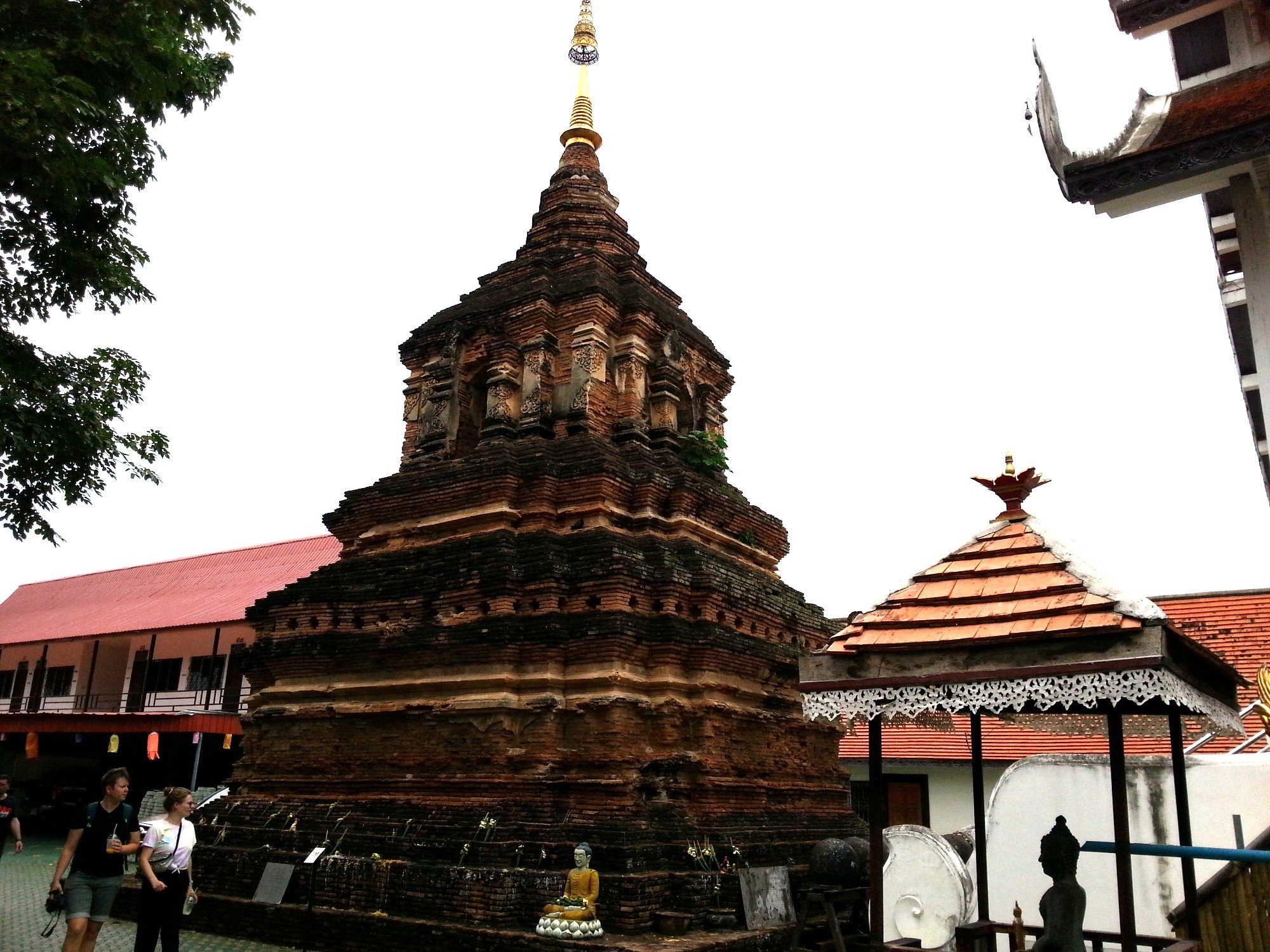 Behind the prayer hall at Wat Jet Lin is the temple’s chedi tower. The style of the chedi is very similar to the chedis in other old temples in Chiang Mai, particularly the one at Wat Lok Moli, which suggests that this chedi was built around the time the temple was originally founded which would make it the oldest part of Wat Jet Lin. 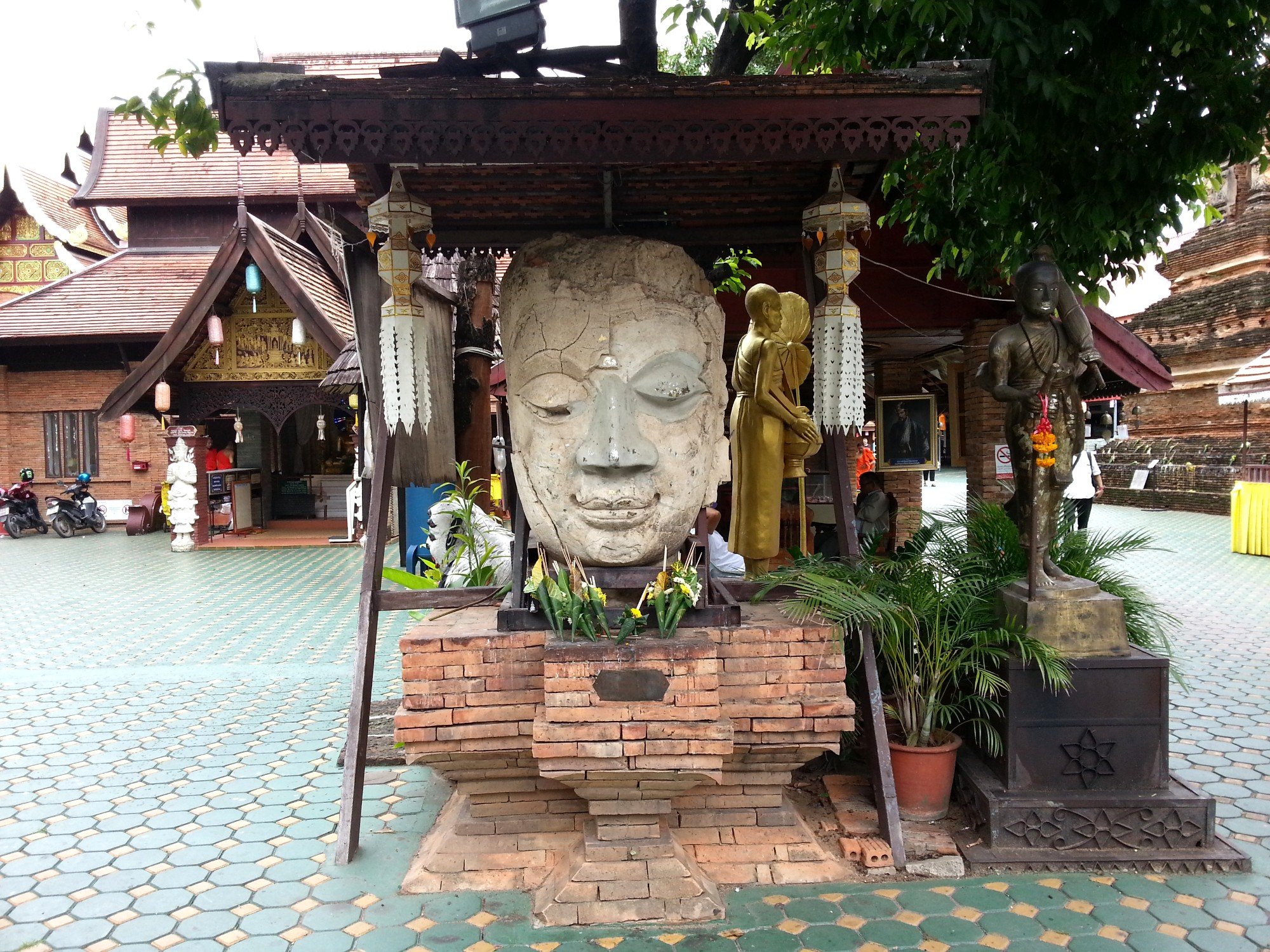 What makes Wat Jet Lin an interesting place to visit, however, is the large number of curiosities dotted around the grounds of the temple. The temple is very old and retains lot of artefacts which are on display. One of the things to look out for is the row of large stone balls on display. These stone balls are traditionally placed around ordination halls in Buddhist temples in Thailand buried in the ground under what are called sema stones which are traditionally placed around ordination halls in Thailand to mark the special purpose of the building. The origin of these stone balls, like many other features at Wat Jet Lin, are unknown. 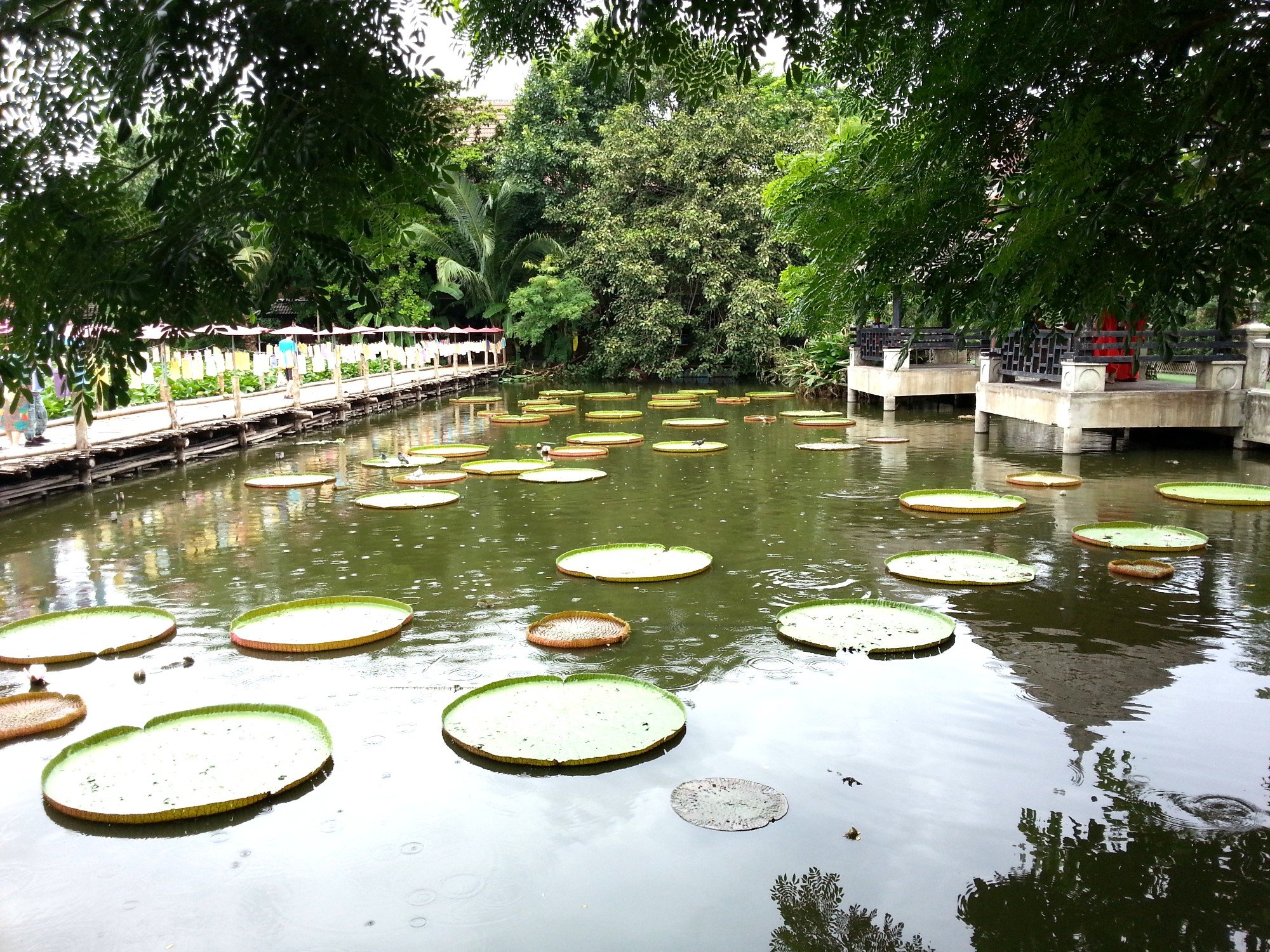 The other feature of Wat Jet Lin which is popular with visitors is it’s lily pond. Very few temples in Chiang Mai have such a pond, and Wat Jet Lin makes full use of its pond with quaint bamboo bridge and adjacent coffee shop, which is a pleasant place to sit down and take a break from a long day of exploring Chiang Mai’s old town area.

Next read about Travel from Chiang Mai to Kanchanaburi