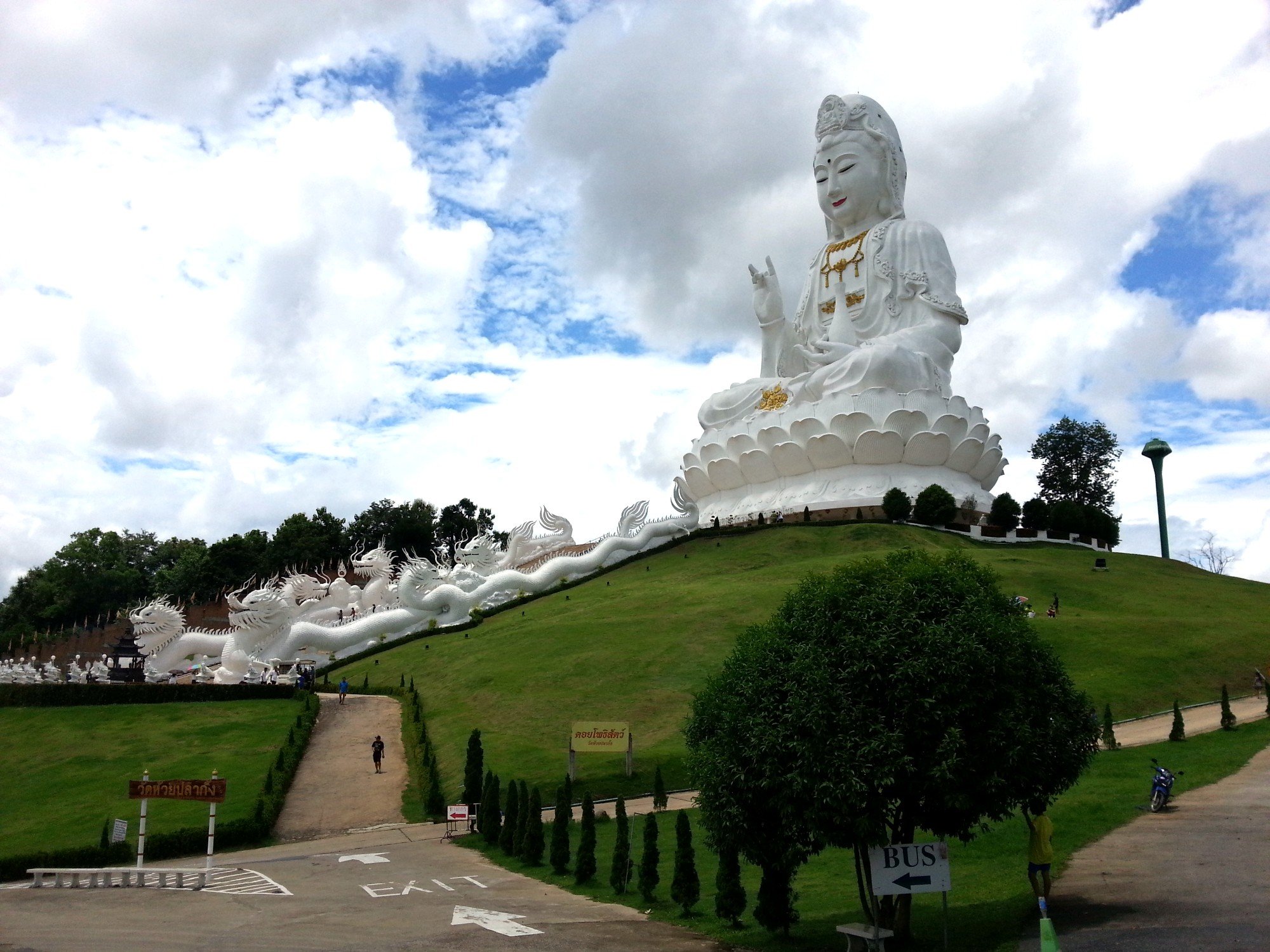 Wat Huay Pla Kang is open to visitors every day from 08:00 to 18:00 and admission is free although there is a 40 THB charge to ride in an elevator to the top of the large statue.

Wat Huay Pla Kang is a relatively new attraction in Chiang Rai which has become immensely popular in the past 2 years. The temple is an ever expanding project and now features three major elements, none of which existed before 2001 and the most recent of three structures was completed in late 2016. 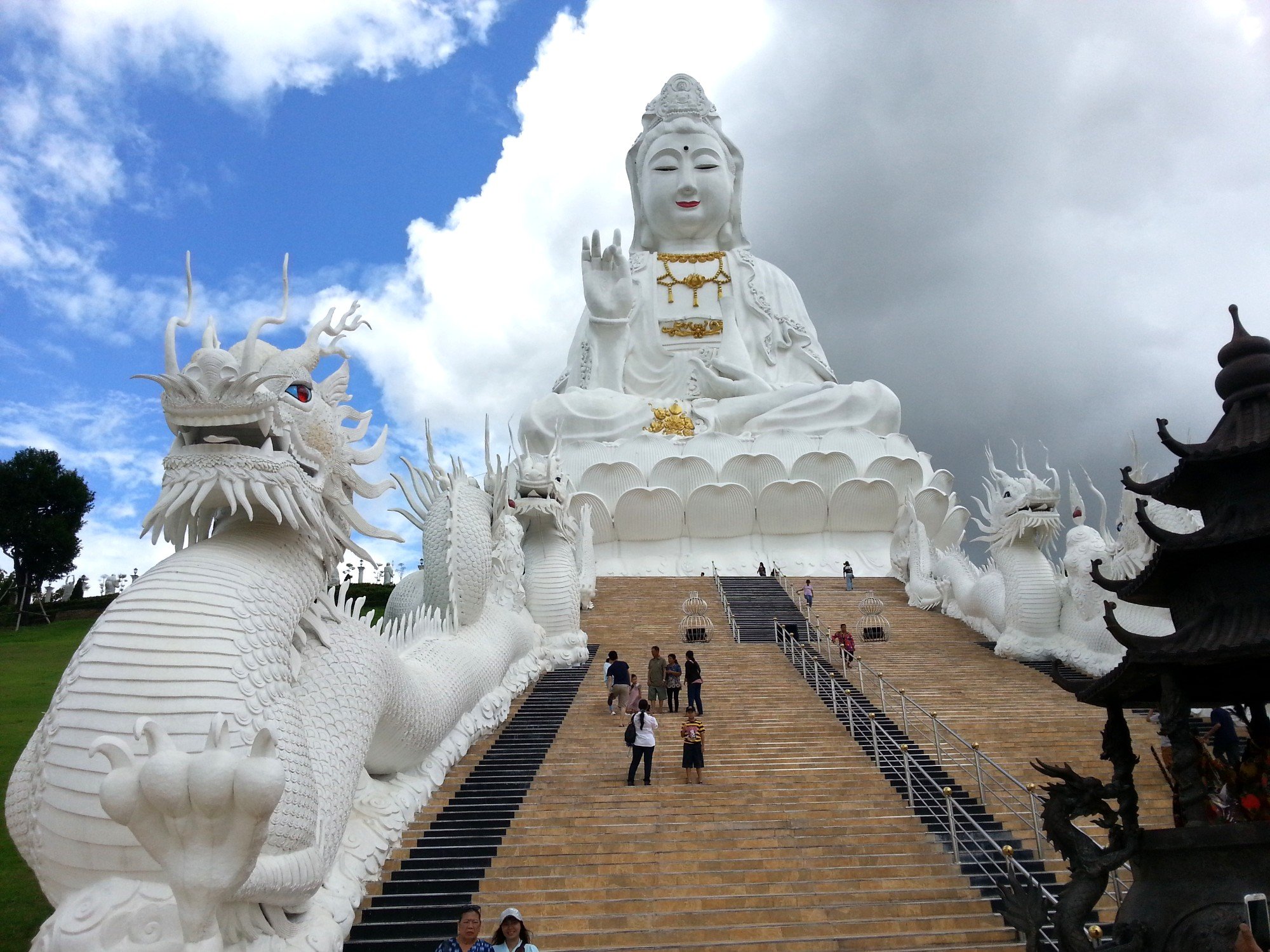 The most prominent part of Wat Huay Pla Kang is its large white statue. The figure represented by the statue is not the Lord Buddha, but rather Guan Yin whose is the Goddess of Mercy in the form of Buddhism practiced in China and Vietnam and the temple attracts a lot of visitors from those countries as a consequence. 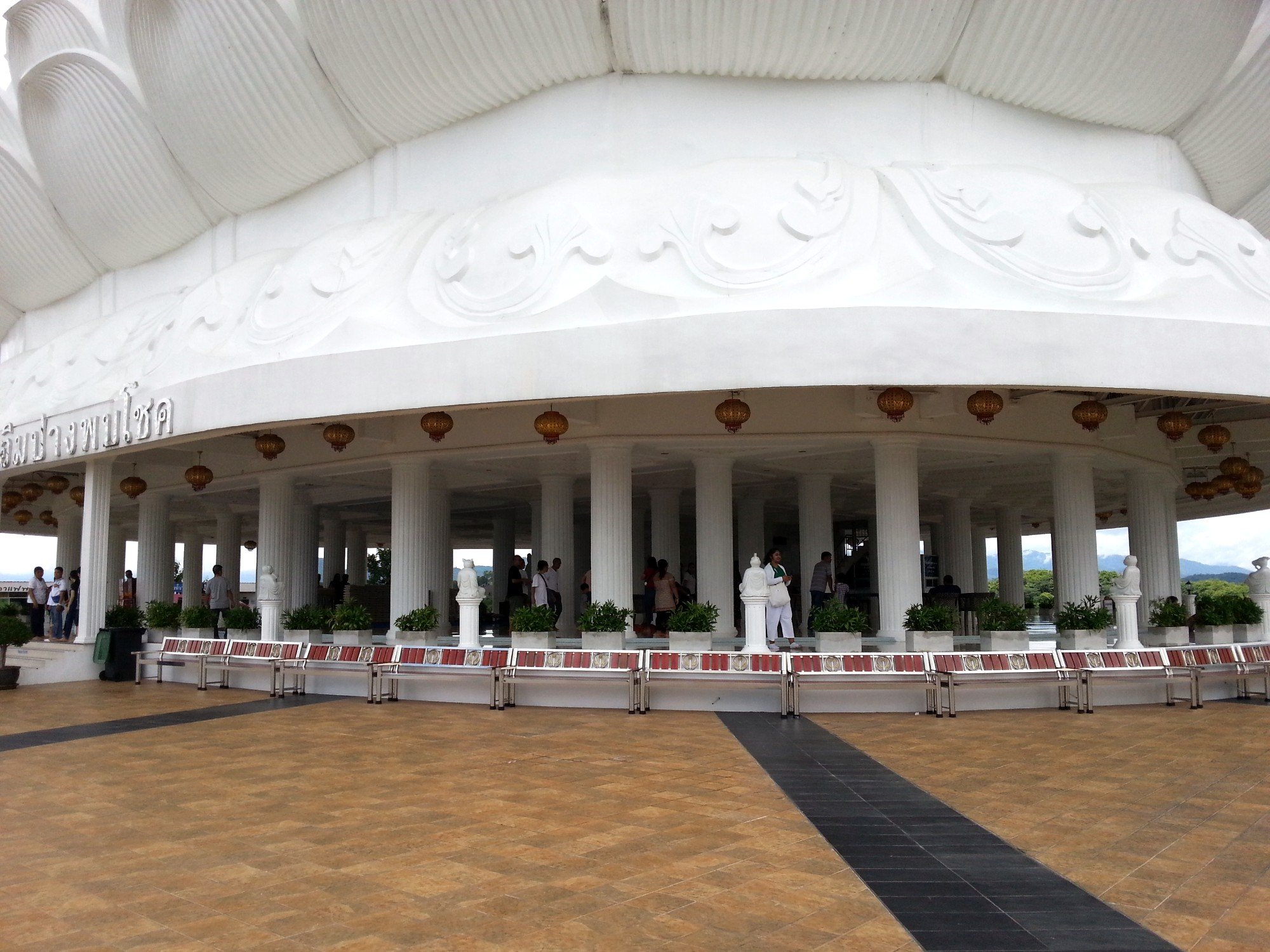 Base of the Guan Yin statue at Wat Huay Pla Kang

The scale of the Guan Yin statue is breath taking and the enormous size is extenuated by the long dragon steps up to the base of the statue. Visitors can enter the statue via the base and ascend its 26 floors by a stair case or take a lift up to the 25th floor for a fee of 40 THB. The inside of the statue is elaborately decorated with white stucco shapes and patterns and there is an observation deck on the the 25th floor from which you can look out through the eyes of Guan Yin statue. 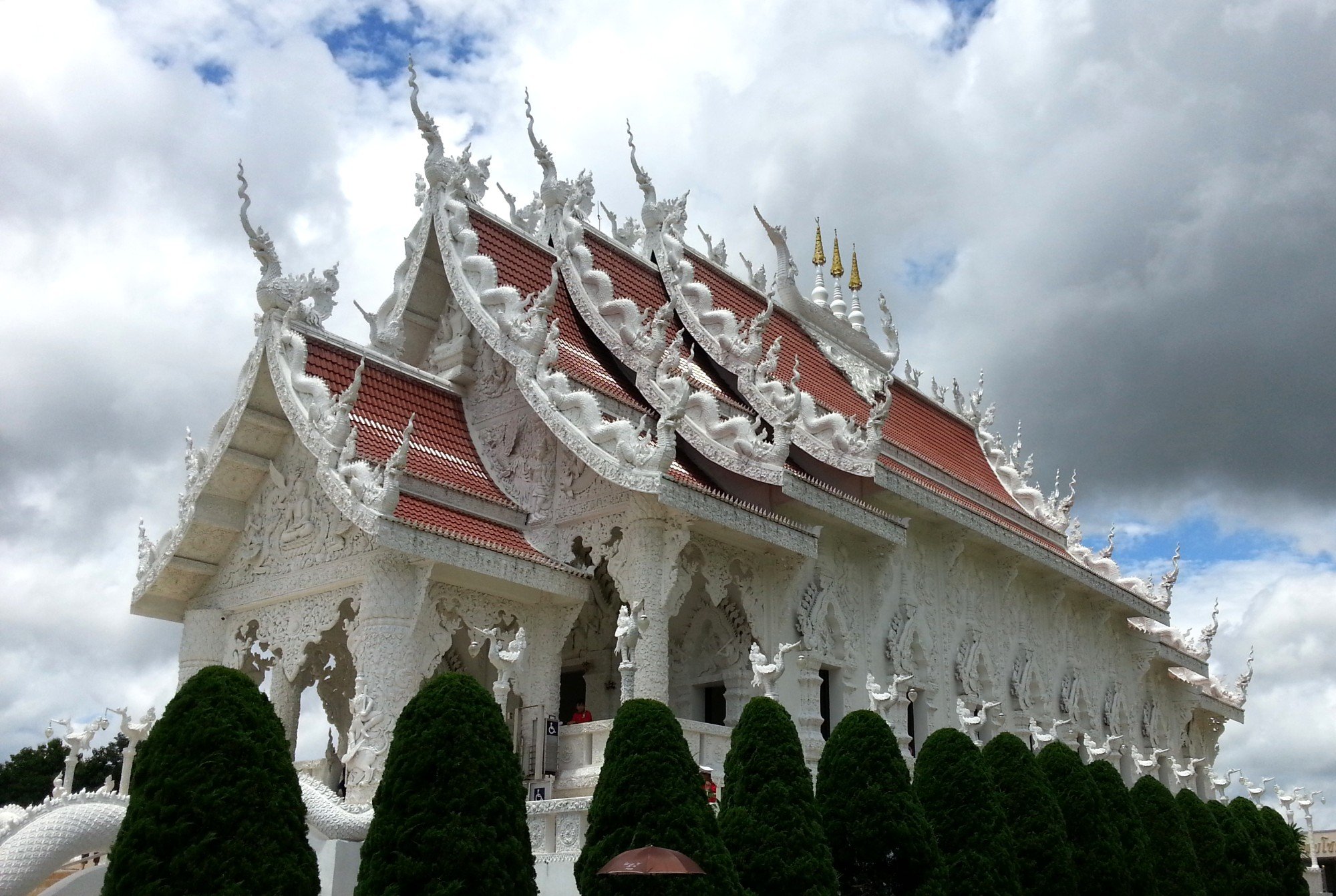 The second major component of Wat Huay Pla Kang is its newly completed prayer hall. The prayer hall bears more than a passing resembling to the White Temple also near Chiang Rai. 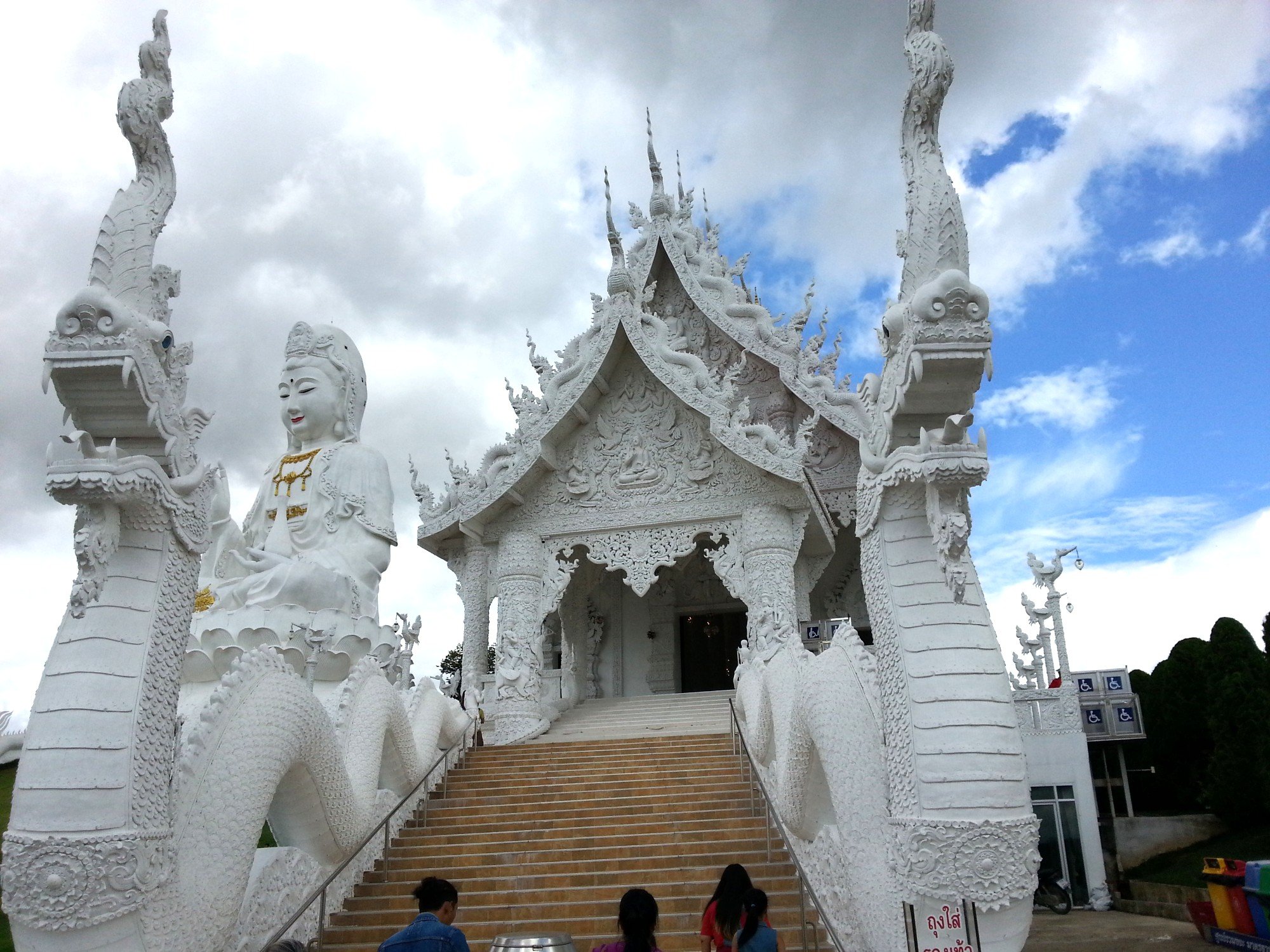 Entrance to the prayer hall at Wat Huay Pla Kang 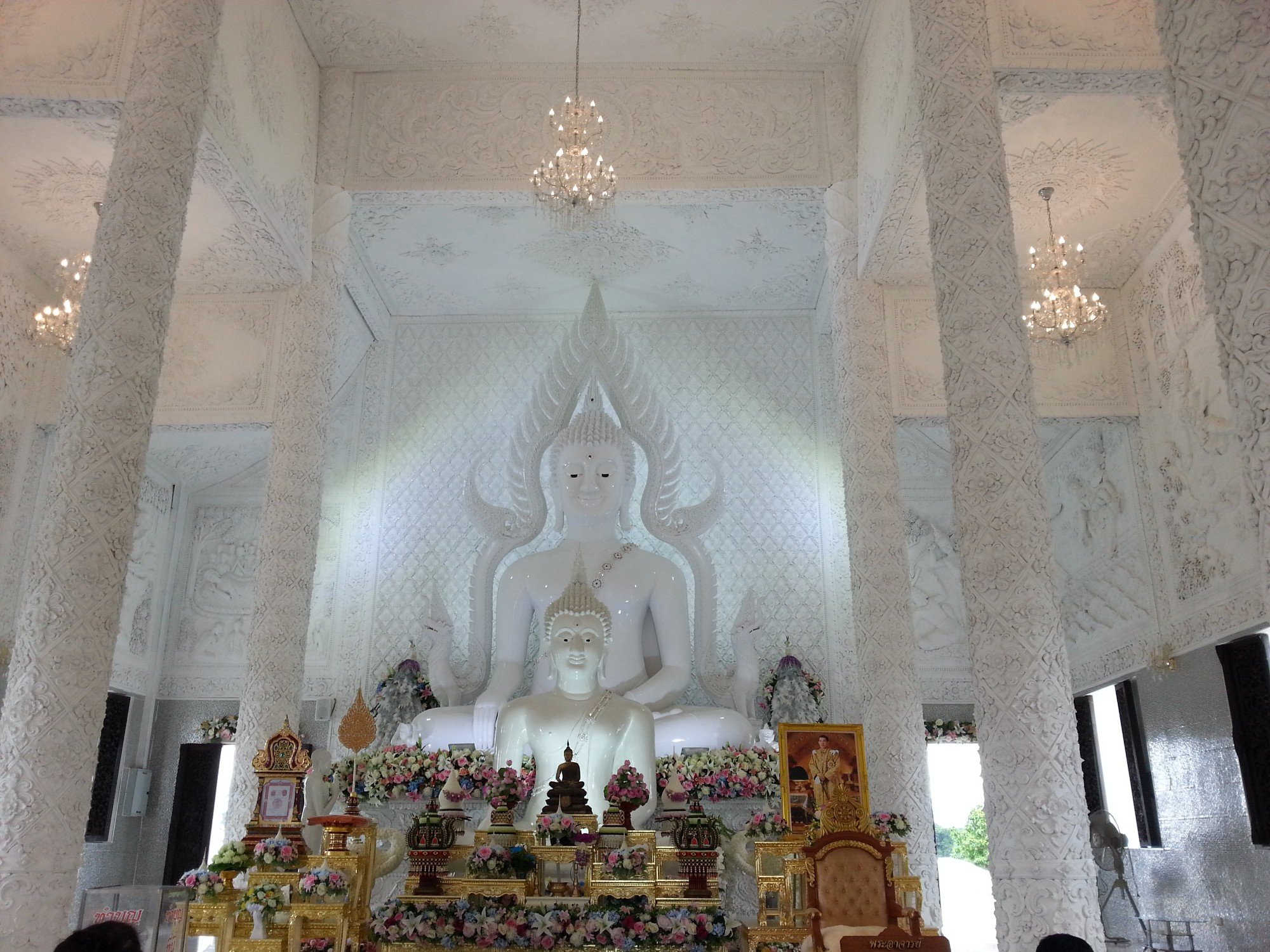 Inside the prayer hall at Wat Huay Pla Kang

The inside of the prayer hall is all white as is the main Buddha statue. The Buddha statue at Wat Huay Pla Kang is very similar to the famous Phra Phuttha Chinnarat statue at Wat Phra Si Rattana Mahathat in Phitsanulok except that it is made from white porcelain. 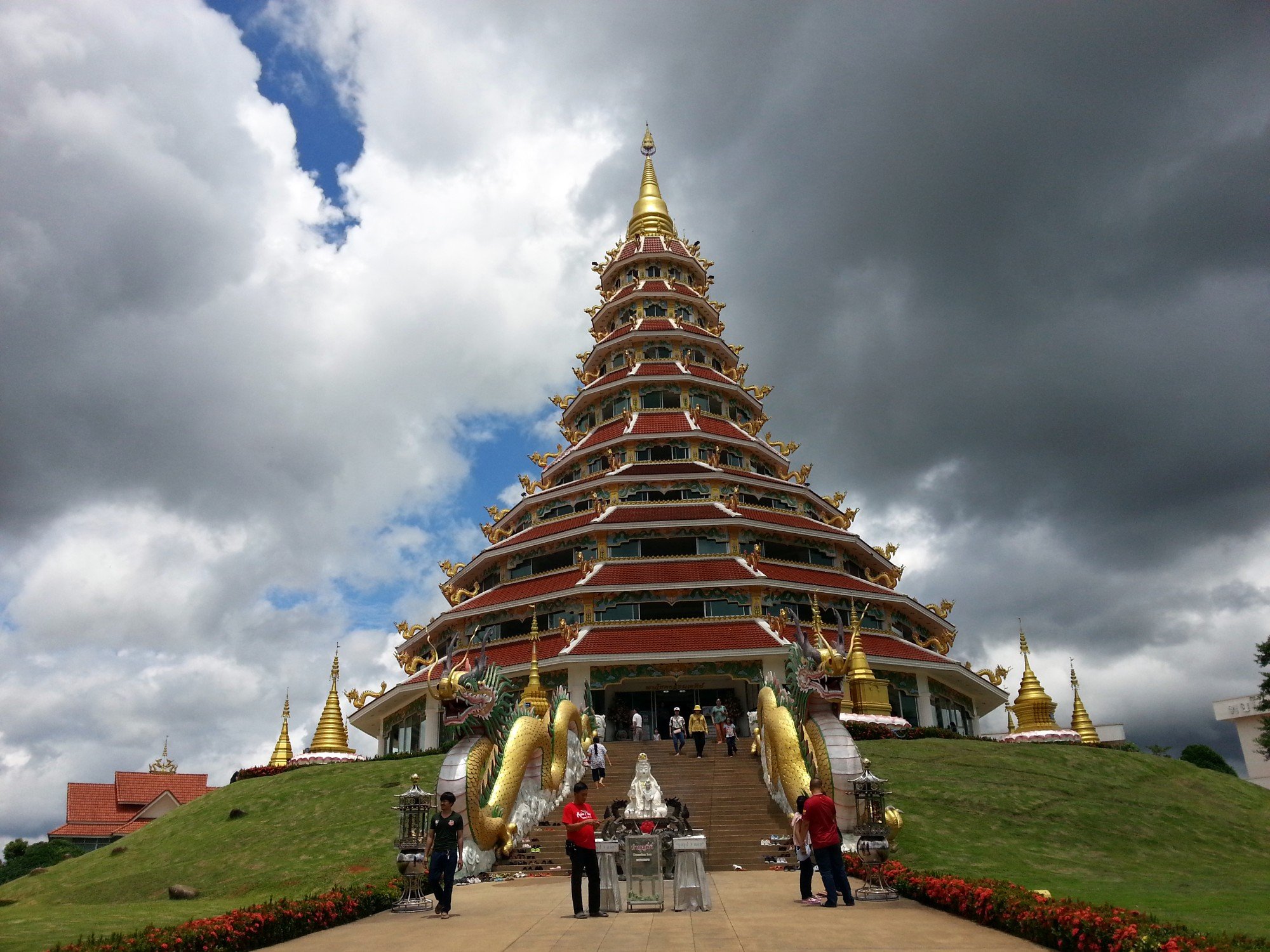 The third major component of Wat Huay Pla Kang is a 9 storey pagoda. Again this is another Chinese influenced part of this Thai temple complex, which also also features a dragon staircase. 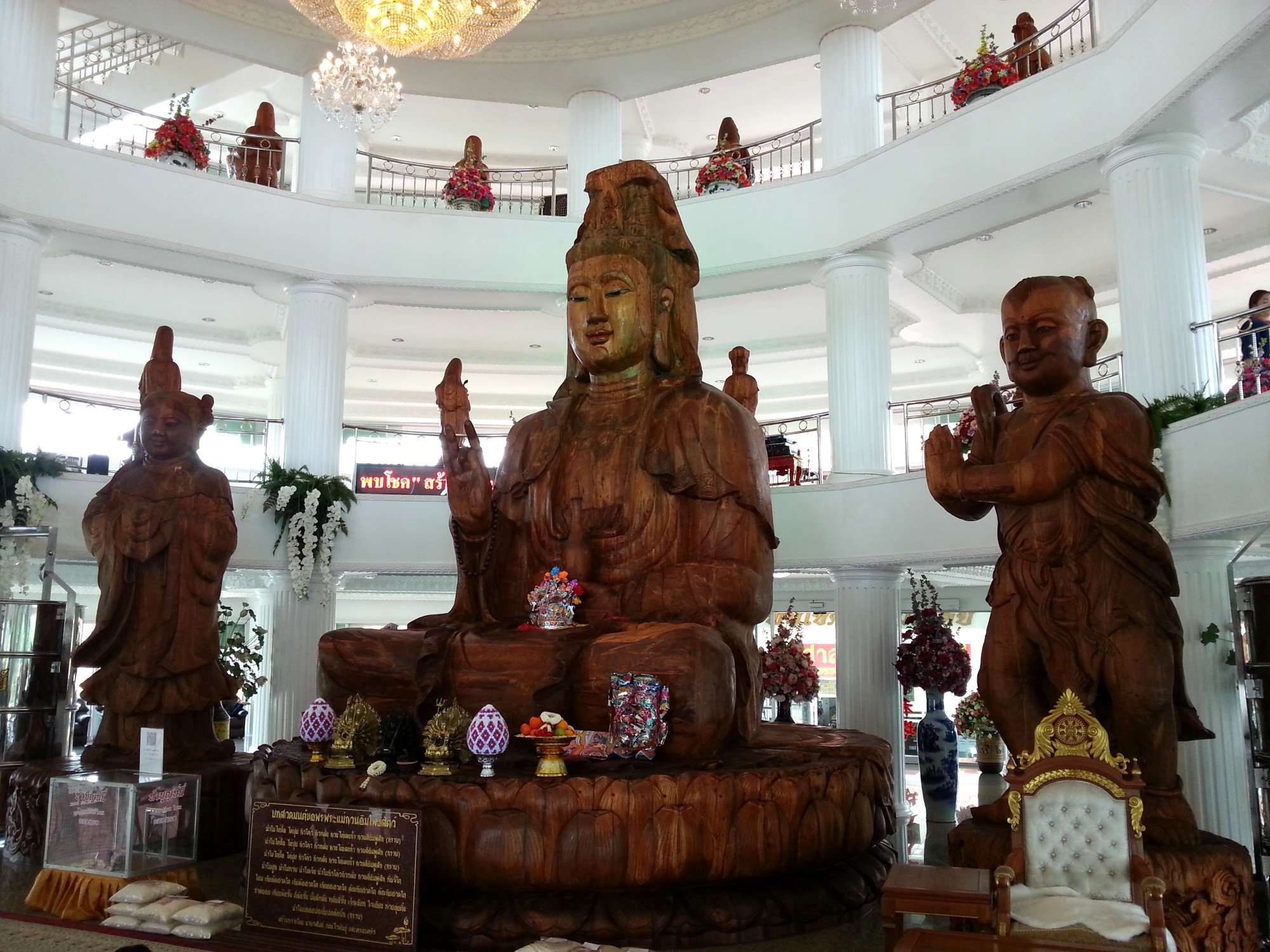 Inside the pagoda at Wat Huay Pla Kang

Following the theme of the other two major structures at Wat Huay Pla Kang, the inside of the pagoda is also white. In the atrium style lobby of the pagoda there is a fantastic Guan Yin statue made from wood, with other deities from Mahayana Buddhism around it and on the upper levels of the pagoda.

Next read about Travel from Chiang Rai to Chiang Mai