Travel from Chumphon to Khao Sok

Fame Tours, which is located near to the train station in the centre of Chumphon, operates a minivan service direct to Khao Sok National Park. The alternative way to complete this journey is to take a train from Chumphon to Surat Thani and then a minivan to Khao Sok. The second option is generally much slower because of the connection time between train and minivan services.

There are 7 direct minivan services a day from Chumphon to Khao Sok which you can book online.

Use the Search Box below to book your tickets from Chumphon to Khao Sok.

Khao Sok National Park covers an area of 739 square kilometres, and borders three other national parks, and two wildlife sanctuaries, creating a massive nature reserve of over 3,500 square kilometres. This area supports a wide range of wildlife including some of Thailand largest and rarest predators including Malaysian sun bears, leopards and tigers, which you are likely to hear roaring in the jungle but unlike to actually see. More easy to spot are the three types of monkey which are common to the park, tapir, gaur, several species of hornbill, kingfishers and possibly likely a snake or two. 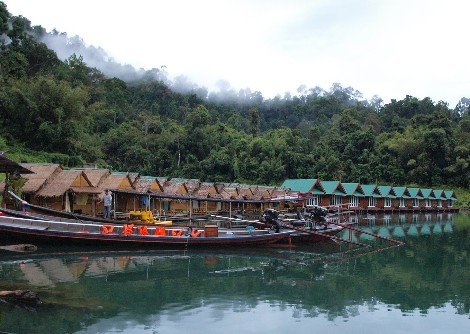 Khao Sok National Park is open year round, although one of the major attractions of the park (the world’s largest flower) is normally only visible in January and February with the flower blooming in the first months of dry weather after the monsoon season. Entrance to the park costs 200 THB per person for foreigner visitors and 40 THB for Thai people. There are two main access points to the park. One of the access points is the park’s visitor centre which is the drop off point for the majority of bus and minivan services. The visitor centre is at the Eastern entrance to the park near to a cluster of resorts, restaurants and bar clustered around the approach road to the visitor centre. From the visitor centre there are a number of different signposted walks you can do inside this part of the park. The other entrance point to the park is the pier near the Ratchaprapha Dam. A large part of the park was flooded in 1980 to create Cheow Larn Lake and a boat tour from the Ratchaprapha Dam pier is a great way to explore the park, and reach the famous floating bungalow where you can stay overnight deep within the wild interior of the park without the need to trek for days through dense jungle to get there. The ease which which visitors can access the park by boat is what makes Khao Sok National Park one of the most popular parks in Thailand.