Tonight 10,000 to 20,000 mostly foreign visitors will go to Sunrise Beach in Haad Rin on the island of Koh Phangan for the famous monthly Full Moon Party to dance the night away drinking and, for some, taking drugs. For the people of Koh Phangan, however, the Full Moon Party actual takes place early in the morning of the day of the full moon with many people choosing to visit the temple to make merit. 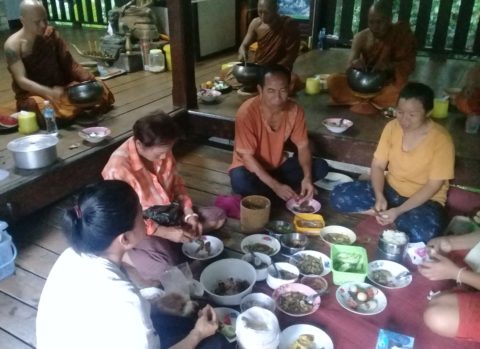 This full moon we went to Wat Thong Nang in the Than Sadet National Park on Koh Phangan to pray with the monks and celebrate the start of a new lunar cycle. No drink, no drugs, no loud music, but a spiritual experience and a chance to step back from every day life and consider things from a calmer detached perspective. 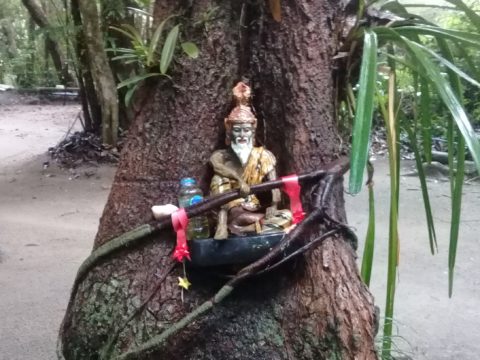 Temple statue growing into the roots of the tree

Some modern Buddhists believe that there is a scientific basis to the significance of the lunar cycle to the life cycle of human beings. The argument is that celestial bodies such as the moon are known to have a powerful effect on water, and given that human beings are made up of around 70% water this means the moon will also have an effect on us. In support of this theory some Buddhists point out that at full moon the metabolism of human beings is known to change with side effects like increased bleeding occurring as a consequence. Religious beliefs aside, the argument is that full moon is a special time when we should change our routine and relax physically and mentally to recharge our physical and mental batteries. Going to the actual Full Moon Party on the beach in Haad Rin doesn’t quite fit in with this theory.

Wat Thong is a temple in the jungle. Its near the Rama V statue near the start of the road down to the beach at Than Sadet and the famous waterfalls. 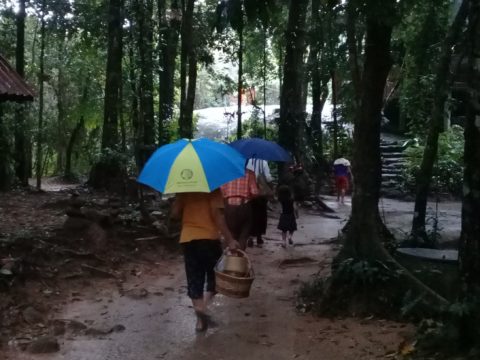 Walking through the jungle to the temple

Wat Thong Nang is about as small a temple as you will find in Thailand. There are four monks there at the moment and they live a very basic existence. They each have a small hut without electric which they sleep in, a toilet block and a small prayer hall with a shrine, and nothing else. 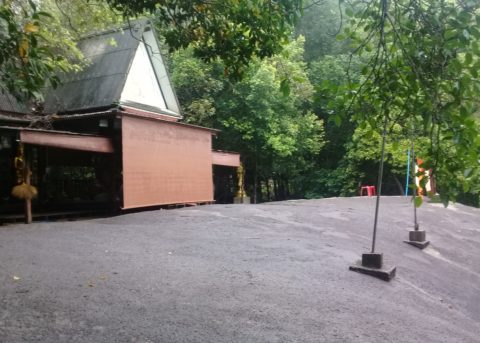 The prayer hall is built on top of a giant block of granite with steps carved into the side of the rock leading down to a waterfall. The only sounds you will hear here are the water going over the falls and those of chanting and prayer. There is a point to these monks being in this isolated place and its a stark contrast to larger temples in urban areas with more modern facilities for the monks who live there. In Thailand there have been cases of monks using their position in temples to make money for themselves and indulge in worldly pleasures, not unlike the 10,000 to 20,000 people who will go to Haad Rin tonight, although these rogue monks tend to be a little discreet about it. The four monks at Wat Thong Nang have chosen to take themselves away from temptation and live in the jungle to practice Buddhism in a way which some believe is more true to the original teachings of the Buddha. 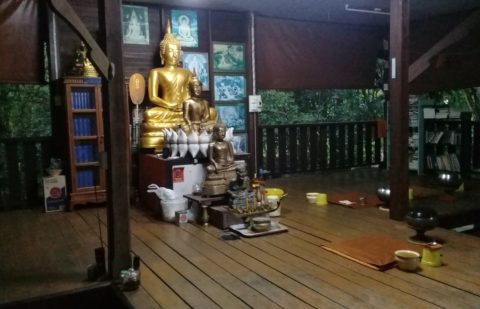 Within the Thai Buddhist Church there is an influential movement of monks known as the Dhammayut movement, who have created something akin to a separate religious order based around the concept of forest temples. To explain a very complex theological point in simple terms, this is a ‘back to basics’ religious movement which was started in at the beginning of the 20th Century by monks who believed that the mainstream Buddhist church had begun to err away from the true teachings of the Buddha and to correct this loss of direction the monks needed to physically and mentally separate themselves from the wider church. Not surprisingly, the Dhammayut movement spent decades in conflict with the hierarchy of the Thai Sangha (Buddhist clergy) to emerge in the last three decades as a powerful force both within the Thai Buddhist church and, some people believe, within Thai society itself with political and economic elites following the teachings of the Forest Temple movement.

An important part of the full moon celebrations is the giving of food to the monks at the temple. This is a ritualised process that Thai people understand but as foreign visitor you would be clueless as to the protocol of attending a temple with food and seating down to eat with the monks. The way it works is that the food is presented to the monks who spoon portions into their alms bowls, with the different types of food all mixed up together. Then there are prayers and chanting until finally the senior monk gives the signal for the monks to start eating. Once the monks have commenced eating then the lay people visiting the temple also start to eat. Compared to the formality of a religious service at a Christian church or Jewish synagogue the meal is light-hearted with the monks discussing a wide range of subjects with the lay visitors and enjoying a joke together. It ends when everyone is full and the lay people clear the plates away leaving the monks to continue their religious pursuits. 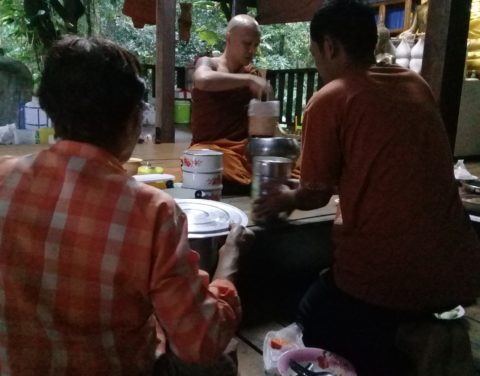 Giving alms to the monks

The act of giving food to monks is a form of ‘punya’ which means making merit in Sanskit and Thai. One of the Buddhist beliefs is that human being are reincarnated and start each new life with bad deeds from the last one to atone for. Making merit means doing acts of kindness to make up for the unkind things you may have done in this life and the ones which went before.