Than Sadet in Koh Phangan

Than Sadet is a designated National Park on the Island of Koh Phangan covering an area of over 65 square kilometres. The park is free to visit although visitors wishing to drive down to the beach must park at a checkpoint and sign in.

The best known feature of the park is the 2.5 km stretch of stream with lots and lots of small waterfalls. For the adventurous traveller with time to spare you could start at the top of the series of waterfall from Wat Thong Nang near the King Rama V Memorial Statue near the roundabout at the start of the newly built concrete road down to Than Sadet Beach. There is a narrow path to the spartan Wat Thong Nang temple before the statue and if you walk to the far end of the large rock upon which the Ordination Hall is built there are steps down down to the stream and one of the first of the waterfalls. 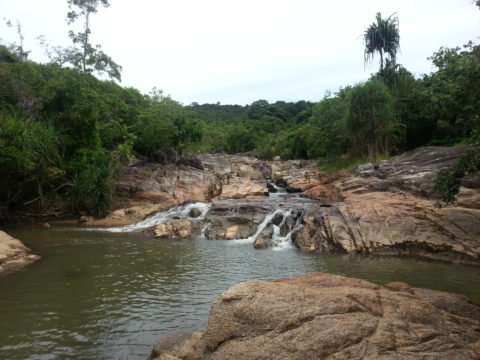 Lower waterfall at Than Sadet

If you don’t plan to walk the entire length of the stream, which is step and dangerous to negotiate in places, then you can drive down the road which runs parallel to the stream stopping off at the small parking spaces along the way with steps down to some of the more impressive and accessible of the many falls. 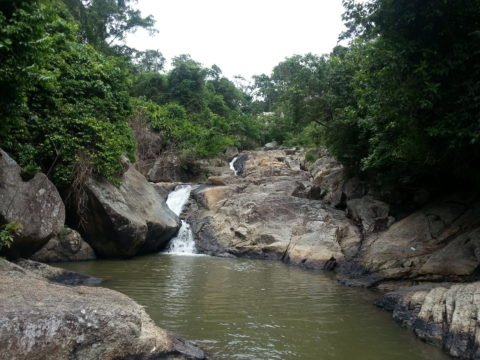 Another waterfall at Than Sadet

At the very bottom of the road near to the checkpoint and car parking area where the stream flows into the sea there is wide set of falls which are impressive during the rainy season and the month or two after (January to February). If you want to swim in the pool then the best ones are further up from the most visited and widest falls at the bottom of the stream.

Royal Connection to Than Sadet

Than Sadet means ‘Royal River’ in the Royal dialect of Thai. The river and national park has been associated with the Thai Royal family since King Rama V (one of the most influential and revered modern day kings of Thailand) first visited Tha Sadet waterfall in 1888. King Rama V is believed to have visited 14 times in total over his lifetime. 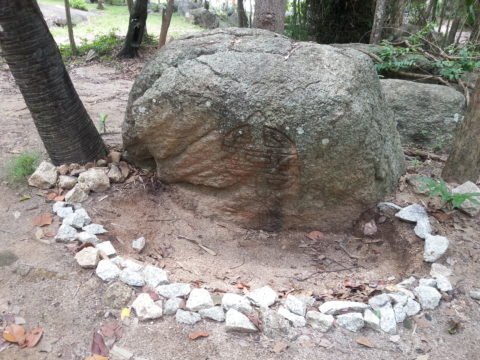 Since Rama V visited other kings of Thailand, included the last King of Thailand Rama IX, have also visited. King Rama V left a number of inscriptions on rocks around the bottom waterfall, and othe kings who visited did the same. If you look around the area near the bottom of the waterfall you find these marking signposted with descriptions of what they are in Thai and in English.

Than Sadet also has a wonderful small beach, great for swimming with bars, restaurants and some small guesthouses. This is a popular place to stay and not as remote and difficult to reach as it once was with the recent construction of a concrete road. There is no mobile telephone signal on Than Sadet Beach, although Mai Ren Rai Bungalows (probably the first hotel or guesthouse to open on Koh Phangan) has an internet connection. 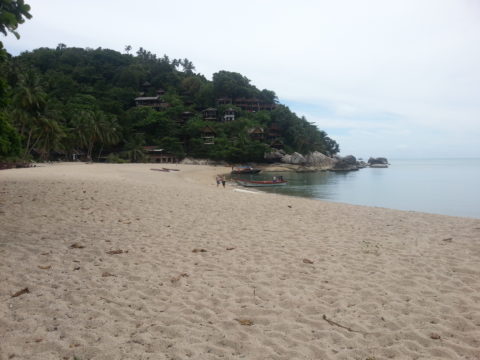 Recently the existence of the small restaurant and bungalow operations on Than Sadet Beach have been come into question because of a dispute between the Thai Government and the local residents over the status of the land upon which they live. The Thai Government’s position is that the whole area, including the beach, is a designated national park and therefore the people living there have no right to use the land. The position of many of the local residents is that they were living in the area before it was designated as a national park and they therefore have a legal right to stay. For the moment the future for Than Sadet’s small local community is uncertain whilst the issue is considered by the Thai Courts.

Travel to Than Sadet

There are two public transport options for travel to Than Sadet beach:

Location of Than Sadet