On the south side of the Wang River in Lampang city centre you will find an impressive collection of locally produced street art. 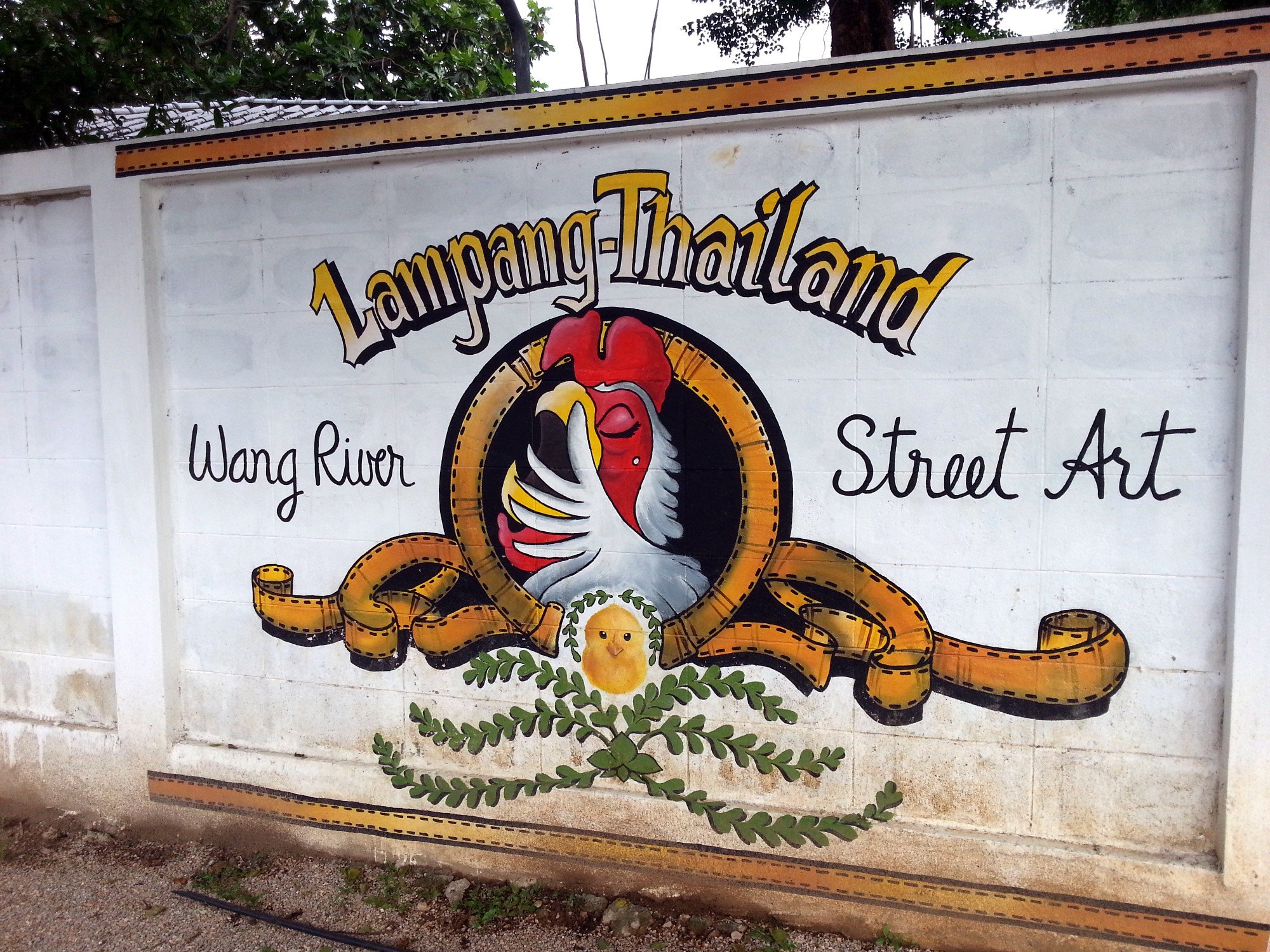 Street Art on the Wang River in Lampang

Most of the murals are located on 400 metres of wall backing onto the riverfront path. For the exact location of the murals featured below see the location map at the end of this article.

About Street Art in Lampang

Like the more famous examples of South East Asian Street Art in Penang and Ipoh, the street art in Lampang focuses on local history and culture, and scenes from local life. 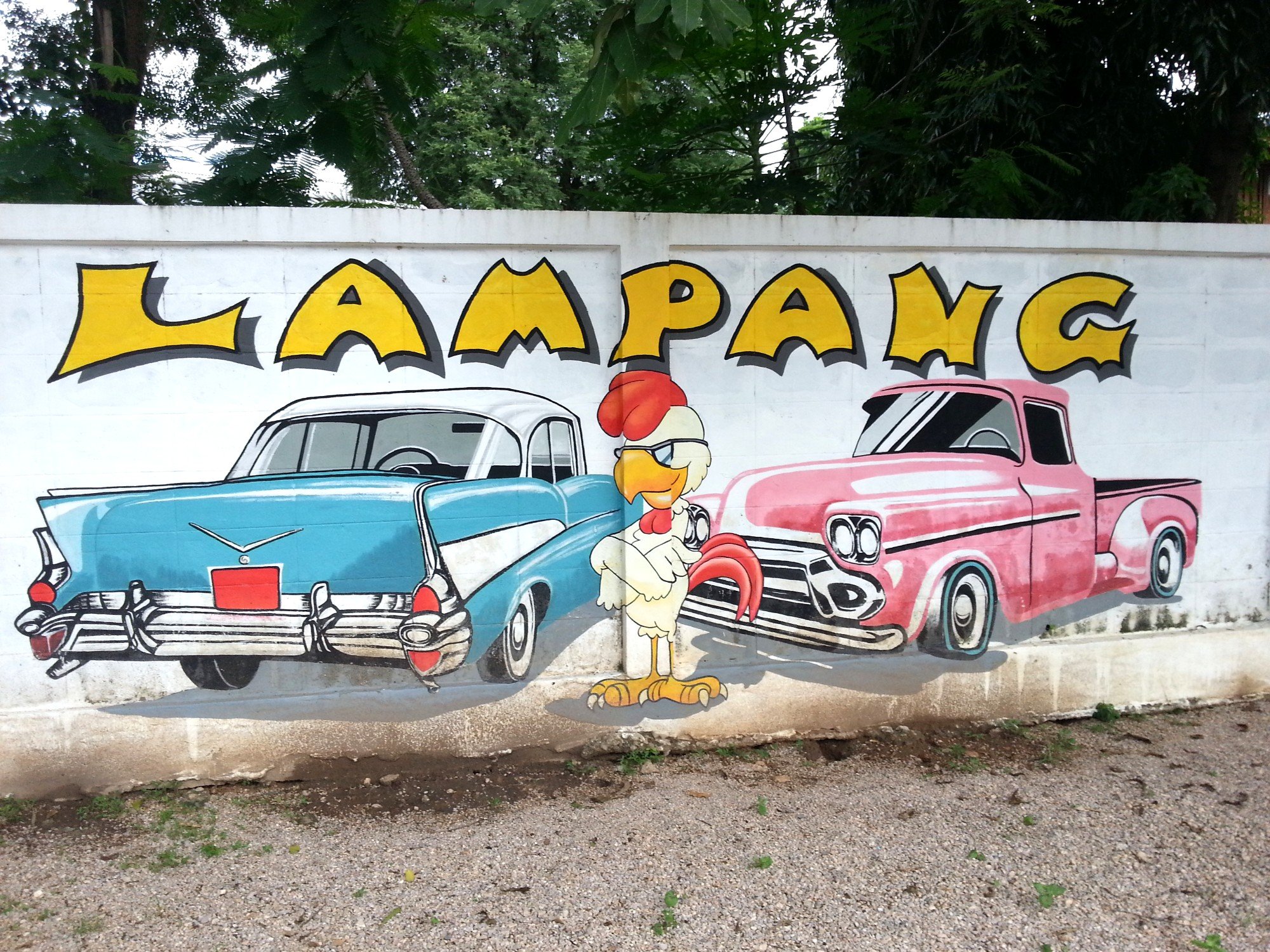 Chickens, and in particular a white rooster, feature heavily in Lampang’s street art. The reason for this is that there is a legend associated with Lampang and chickens. According to this legend the Hindu God Indra came to Lampang and transformed himself into a white rooster to wake the local residents up in time to give alms to the Lord Buddha who, according to the legend, made a trip to the province. 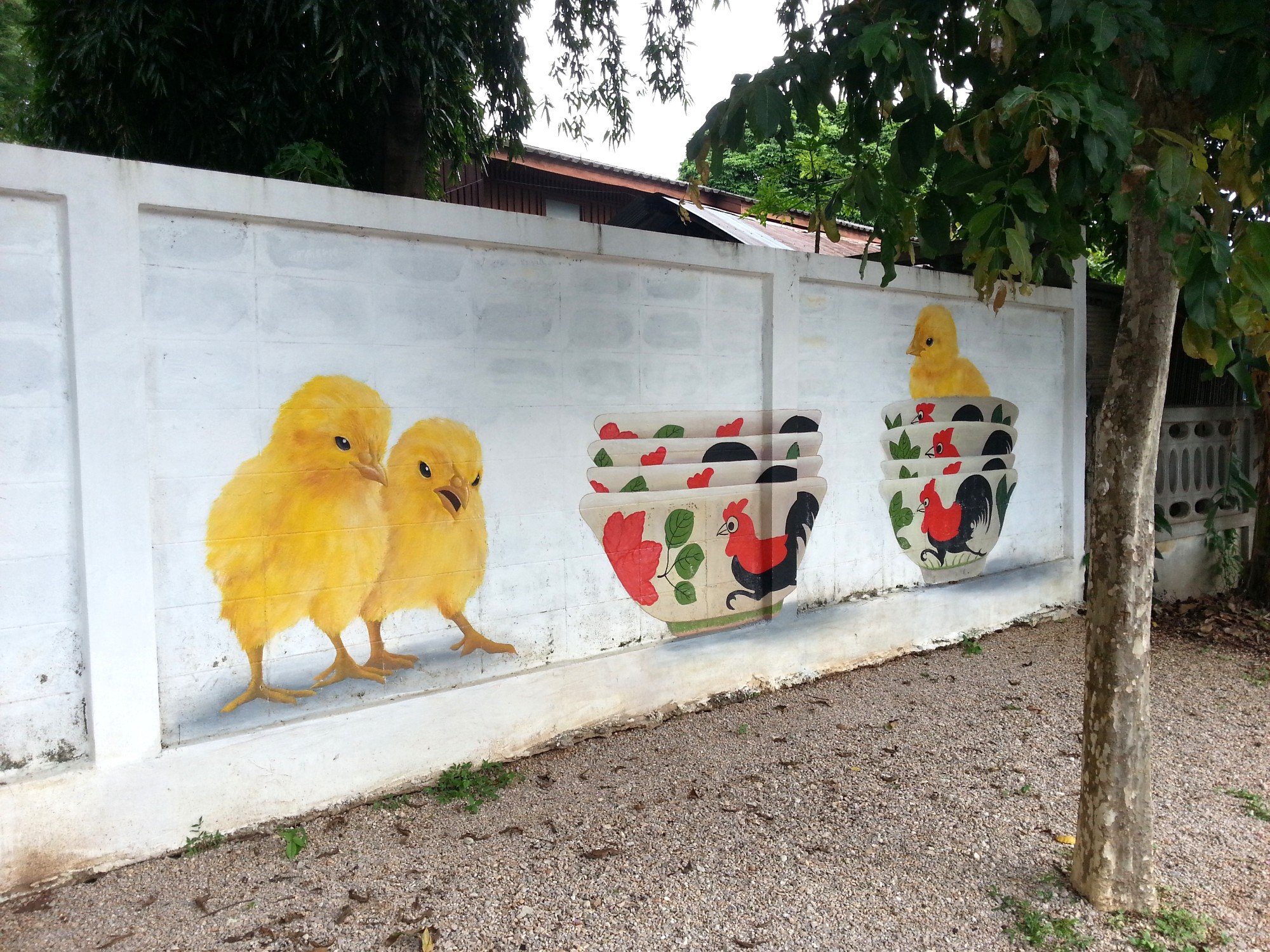 Chicks in bowls mural in Lampang

Another thing Lampang is famous for is its ‘khao teen’ or rice cakes, in particular the rice cakes produced by Khun Manee and sold from her shop on the Ratsada Road in Lampang town centre. The Lampang rice cakes are made by mixing sticking rice with watermelon juice. The mixture is then left to dry in the sun before being deep fried and finally having syrup drizzled over the top. A significant proportion of Thai tourists to Lampang buy these rice cakes to take home as gifts and souvenirs. 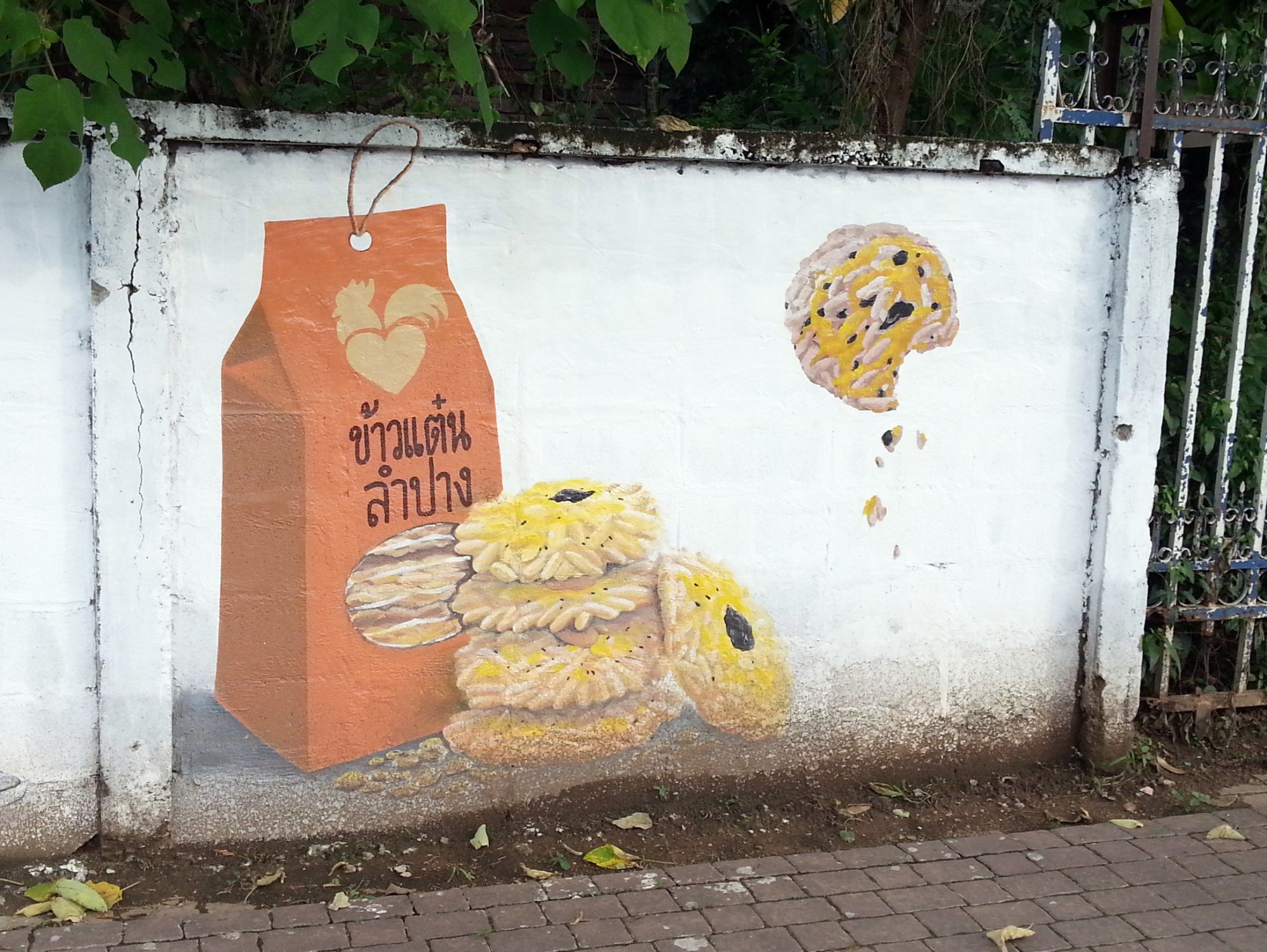 One of the larger murals on the Wang Riverfront in Lampang features a near full set of the major tourist attractions in Lampang in black, white and gold including Baan Sao Nak, the Ratsadaphisek Bridge, the Thailand Elephant Conservation Center, Wat Phra That Lampang Luang and the railway line running through Lampang, which local people are very proud of. 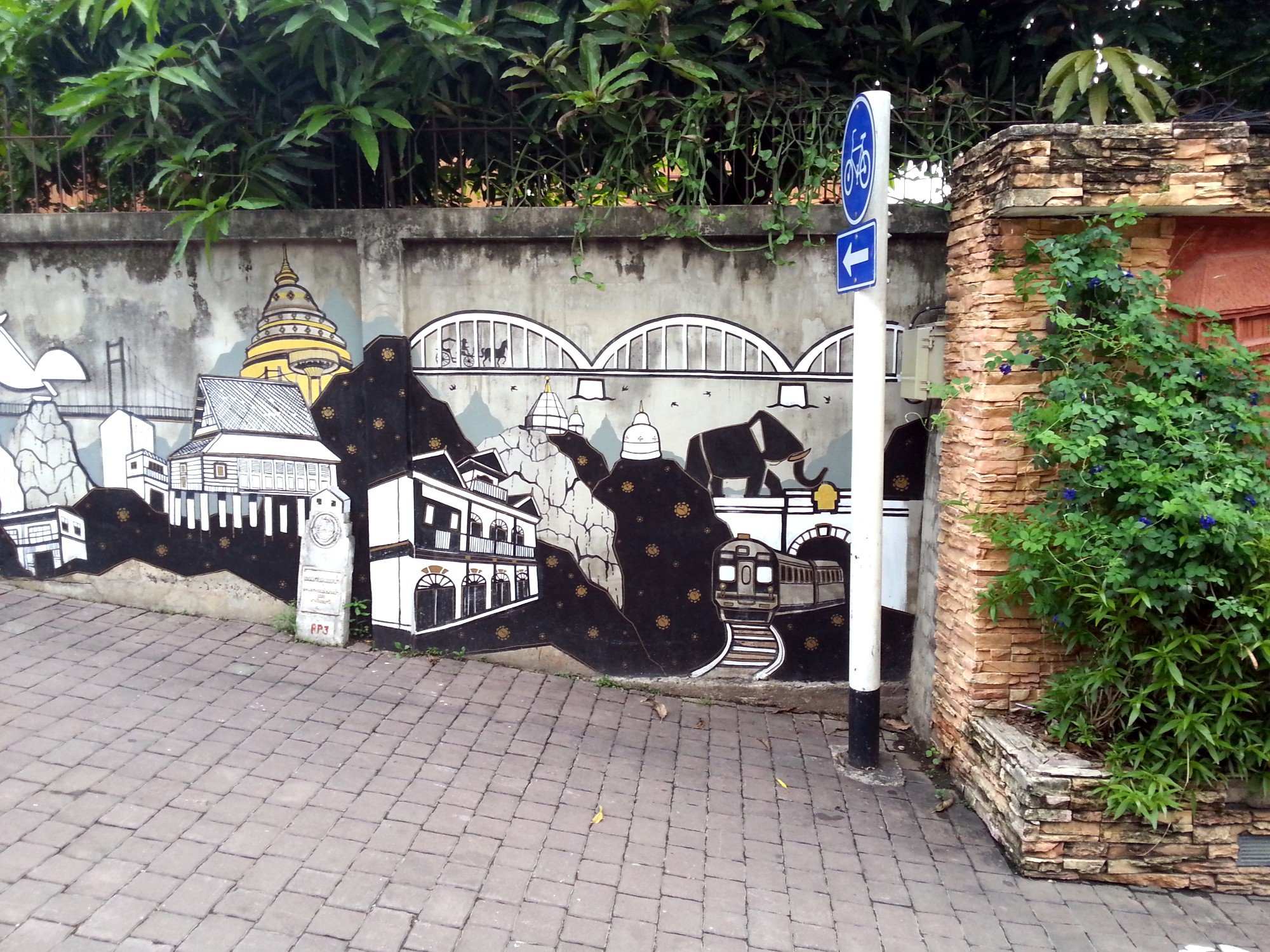 Some of the murals in Lampang also employ an artistic technique that is is very closely associated with, and a major defining characteristic of, the South East Asian Street Art Movement as a whole: using existing features of the environment which the mural is painted on as part of the mural itself. The art becomes tied to the place where it is painted as the physical features are part of the picture. 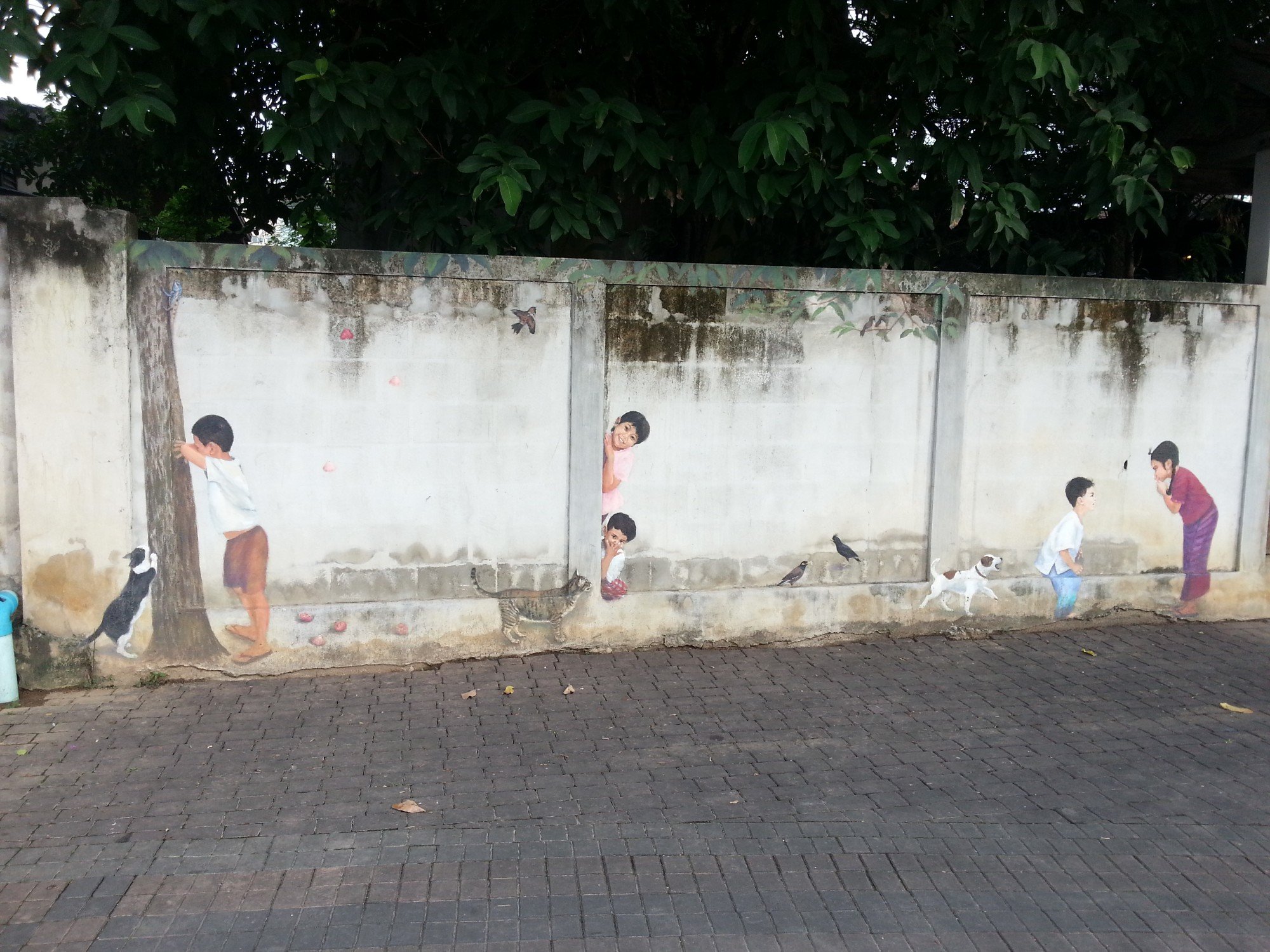 Children and pets mural in Lampang

The ‘children and pets’ mural in Lampang is a good example of this. The children in the centre of the picture appear to be hiding behind the pillar holding the wall (on which the mural has painted) in place. The scene of children playing with dogs and cats is a typical everyday street scene in Lampang immortalised in the form of a painting. In the mural the local population is permanently imprinted on the physical environment emphasising the inextricable link between people, place and identity. It is as though the local people have literally seeped into the walls of the town. 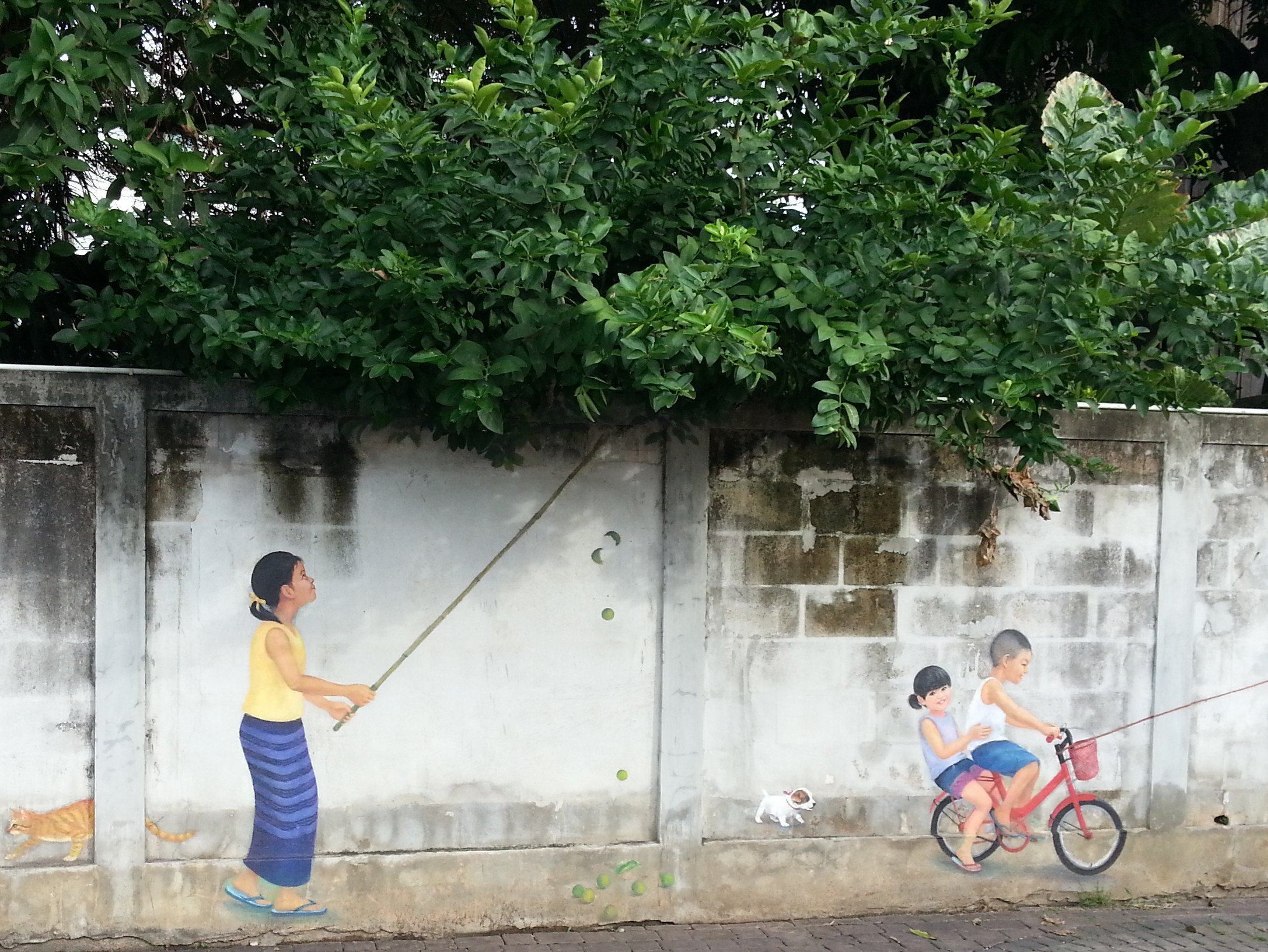 The same themes are emphasised in the mural of the girl collecting mangoes, which includes a smaller picture of a boy on bike with a fishing road presumably to try his luck catching fish from one of the bridges over the Wang River. Collecting free food is very much a part of traditional life in Thailand as a whole and people still do it in the large modern town of Lampang.

Next see Bus times from Bangkok to Lampang