Thailand is a great place, however, its full of rubbish and I am not talking about the low quality fake products you can buy in markets here, or indeed even the unpleasant unwanted unregistered and seemingly unemployed foreigners who hang around here for years on end, I am talking about waste, garbage, junk and trash. Every city, town, beach and even some of the jungle is overflowing with the stuff. Its a growing problem.

Boat in on a Beach

A beautiful white sand beach. Palm trees. Clear water. Small islands shimmering in the distance. This is Southern Thailand at its best and its what attracts tourists in large number and allows a traditional way of life (some fishing, coconut farming and more recently providing services for those tourists) for the Thai people who have lived here for generations. 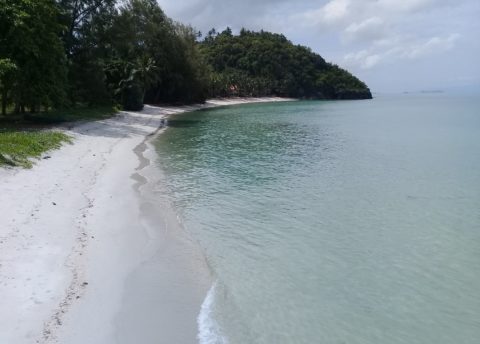 One of Thailand’s many beautiful beaches

However, there’s a problem. Its only that paradise beach dream if you look in the one direction. Look the other way and what you find is literally rubbish, albeit a very large and difficult to move piece of rubbish. 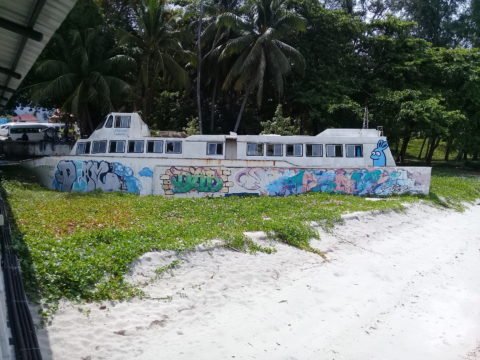 Did someone simply forget that they owned this boat?

The beach in question is Lipa Noi in Koh Samui and its next door to the Koh Samui Raja Ferry Port. The boat looks like an abandoned tour boat and not the kind of vessel which the Raja Ferry Company has or does use and clearly it is not their responsibility to remove it, although they could have chosen to do so at relatively little expense when they recently had heavy machinery at the port during the construction of their new terminal building. This absence of the necessary desire to clear rubbish in Thailand is something we will discuss further below.

Does Thailand really have a rubbish problem?

Statistical information about waste in Thailand, particularly meaningful comparisons to other countries, is patchy. What seems clear, however, is that Thailand produces relatively little rubbish. The USA, followed by Russia, Japan and European countries are the biggest producers of garbage. The OECD estimated that in the USA in 2014 the average daily amount of rubbish produced per person was 2.02 kg, compared to 1.14 kg per person per day in Thailand, with half of that amount being organic waste. Clearly, by international standards Thailand is not a ‘wasteful’ society. The problem is, quite simply, that Thailand is very bad at clearing up the waste it does produce. A 2017 report prepared by Somrat Kerdsuwan for the United Nations Office for Sustainable Development estimated that only 35% of the garbage Thailand produced is ‘properly’ disposed of.

Is Thailand to poor to deal with it garbage?

One perspective on this issue is that Thailand is a ‘developing’ country lacking the resources to deal with its garbage problem. 30 or 40 year ago that may well have been true, and it mattered less then because Thailand produced very little garbage because being a poor country its people consumed a lot less manufactured items in non-biodegradable packaging or with non-biodegradable component parts. The same argument does not apply to modern day Thailand which is a lot wealthier. A country with a Government embarking on massive infrastructure projects such as high-speed rail and purchasing expensive defence technology like cutting edge fighter jets and submarines has ample resources to pay people to pick up rubbish and then dispose of it.

What’s the problem then?

Another possible explanation is Thai people don’t care that their country is increasingly become covered in litter. This explanation, however, doesn’t really ring true. A good illustration of this is a story recently reported in Thailand’s Daily News website of two Swiss ladies on a beach holiday in Thailand. The two Swiss ladies spent part of their holiday clearing up rubbish from the 5 km of beach in front of their bungalow, and this came to the attention of some Thai journalists who wrote about this, partly because the Swiss ladies in question were young and looked good in bikinis but also because rubbish is an issue in Thailand. The story doesn’t end there. Local officials got in on the act commending the ladies for their effort, providing the ladies with plastic bags and drinks during photo opportunities. The local officials also took the opportunities to criticise local people for not doing the rubbish clearance themselves. This developed into a bit a row with some local people responding by asking the pertinent question in all this: wasn’t the job of clearing up the rubbish something that the local officials themselves were responsible for? And this very important question leads us to the real hub of the problem here.

The termed ‘collective action problem’ was coined by visionary American economist Mancur Olson in his 1965 book The Logic of Collective Action: Public Goods and the Theory of Groups. What Olson realised is that it is very difficult to compel individuals to do things which result in some kind of benefit shared by everyone (a ‘public good’ as it is known by economists) because of the ‘free-rider’ problem. The ‘free-rider’ problem is where an individual is put off helping to achieve a public good because they are rightly concerned that other individuals won’t contribute to achieving that public good and will simply get a ‘free-ride’ off those public spirited individuals choosing to contribute. This is exactly what happens in Thailand with no-one voluntarily clearing up their own rubbish because they also know that no-one will else will bother, moreover, if they do clear up the rubbish into bag then the question remains as to what will happen to it then. In fact Thai people are acting perfectly logically not clearing up rubbish unless it directly affects them, for instance because the rubbish on the beach puts people off eating at their beach side restaurant. For example, rubbish in the jungle affects everyone by destroying the environment, but affects no particular individual much more than any other and no particular individual therefore has any incentive to sort the problem out.

One of the main benefits of having Governments in the first place is to overcome collective action problems in order to achieve public goods; only Governments have the power to compel individuals to contribute towards public goods and without their intervention things simply won’t happen. Charities, public movement and dedicated individuals can all help but sadly given the size of the problem their efforts, whilst well intentioned, tend to be about as effective, in the big scheme of things, as digging a canal with a teaspoon. The Thai authorities need to get into action on this point. Taxes need to be raised, sufficient waste disposal and recycling facilities put in place, penalties enforced for improper disposal of waste and incentives to stop the unnecessary use of plastics put introduced. This is happening all other the world at the moment and there are lots of tried and tested measures which Thailand could adopt. When I buy a single product, such as a bottle of water, from 7-Eleven why am I given a plastic bag to carry it in and a plastic straw? Why does my food come in a polystyrene tray, rather in tray made from natural fibres? . Plenty of coconut husks in Thailand. Why are the only waste bins on the street in Thailand provided by convenience stores? Emptying a bin is cheaper than picking rubbish up from the street or fishing it out of the canal. Lots to be done, but berating individuals for not going out and collecting the rubbish around them seems like an excuse on on the part of the authorities and something the Thai public should be rightly angry about.

Next find out Bus, train and ferry times in Thailand