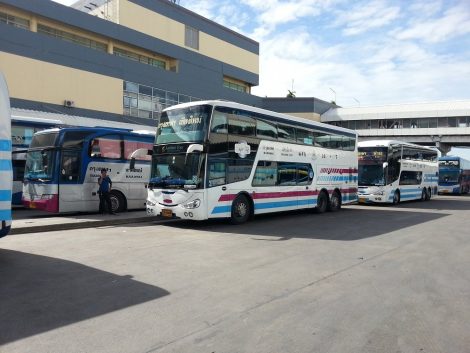 There is a wide range of facilities available at Morchit Bus Station. This bus terminal has recently been rebuilt and has the best facilities of any of the bus station in Bangkok:

On the 3rd level of Morchit bus station there are hundreds of separate counters for the many small and large bus and minivan companies operating out of Morchit bus. For the more popular destinations there are several companies doing the same trip and multiple departures throughout the day. 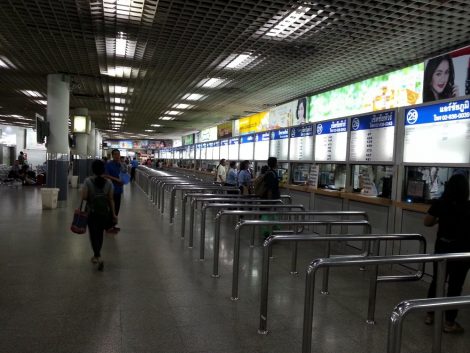 Whilst it is possible to simply turn up and book a ticket before you travel, you risk having a long wait or having no option but to take a less comfortable bus or minivan than you would have preferred.

Tickets for travel to all destinations from Morchit Bus Station are available for purchase online using the Search Box below.

The quickest and easiest way to get to Morchit bus station is to travel to either Chatuchak MRT (metro) station or Mo Chit BTS (skytrain) station and take a taxi from there. On the meter the charge should be between 50 and 60 THB. Please note that in Bangkok it is normal to round meter taxi fares up to the nearest multiple of 10 THB. Therefore expect to pay 60 THB for a meter taxi journey from Chatuchak MRT or Mo Chit BTS stations to Morchit bus station.

There are three options for travel from Bangkok International Airport to Morchit Bus Station: 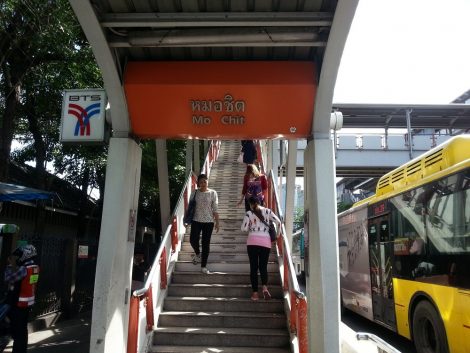 There are two options for travel from Don Mueang Airport to Morchit Bus Station:

From Morchit bus station you can travel to nearly every destination in Thailand. For many Northern destinations (such as Bueng Kan) the only direct public transport options available are bus services from Morchit bus station. There are some Southern destinations however, such as Koh Phangan and Chumphon (for the Koh Tao ferry) where you need to go to the Southern bus terminal or the Khao San to board the bus, or alternatively take a train.

The Roong Reuang Coach Company operates the bus services on this route. The journey takes three hours in an air-conditioned bus which does not stop on the way. The arrival point is Pattaya bus station, which is about 3 km to the North of central Pattaya.

The journey takes 10 to 11 hours from Morchit bus station and tickets cost between 579 THB and 676 THB depending on which company you travel with and which bus. The more expensive tickets are on buses with few seats which means that the ones there are recline further back making it easier to sleep.

This service is by minivan with the Kwan Chee Vee Tour Company. The journey takes 3 hours and tickets cost 150 THB per person. The arrival point in Kanchanaburi is the bus station, which is 2 km from the popular Maenam Kwai Road area where most of the resorts are located.

The journey takes 13 hours and cost tickets cost 1,020 THB person. The arrival point in Phnom Penh is in the centre of the city near the Tonle Sap River and the Giant Ibis bus station, from where you can travel onward to Ho Chi Minh City in Vietnam.

C U Inn Bangkok is the closest hotel to Morchit Bus Station.

Next read about Bus Travel from Bangkok to Chiang Mai