Life and culture in Thailand never ceases to amaze. When you think you have seen it all in Thailand, something new comes along and surprises you all over again. Rather like this handsome fella I came across early in the morning near Sukhumvit Soi 1 selling bags of goldfish. At the time I though it was a bit odd which is why I took the picture. 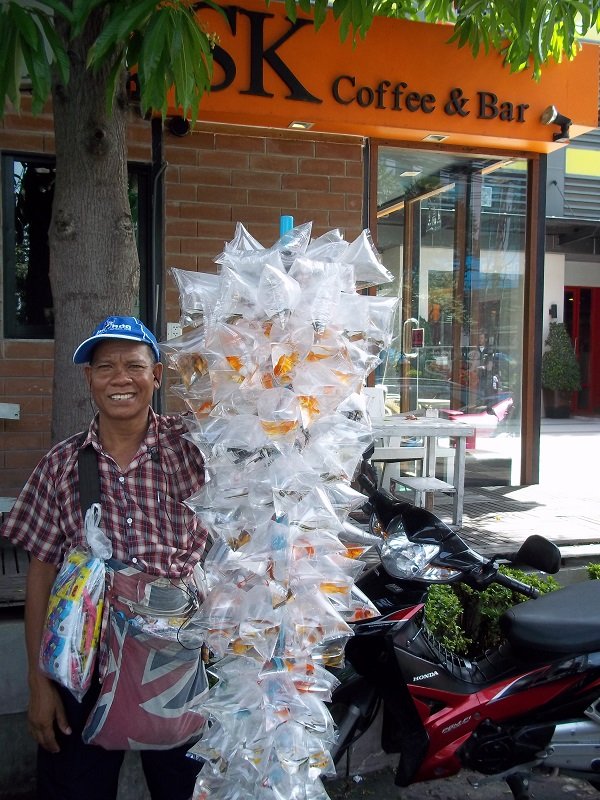 Fish for sale and release

Goldfish in a Plastic Bag

Whilst there is nothing odd about selling goldfish in a bag – this has been done at fairgrounds in Europe and the USA for years – there was something a bit out of place selling fish at 07.30 in the morning at the busy end of the Sukhumvit Road. At that time of the morning the only people around are the vendors setting up their stalls and people commuting to office jobs via the nearby BTS station.

Fish Released into the Canal

At the time I simply thought that maybe Thai people were particularly fond of keeping goldfish and that this enterprising chap was just being particularly diligent in making an early start on a hard day of fish selling. When I showed the picture to my wife what she explained was that people bought the fish to release them into Bangkok’s canals (called ‘khlongs’ in Thai) before they went to work. 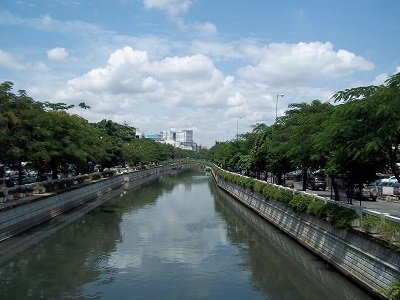 The releasing of animals, particularly fish or birds, has long been a part of Thai Buddhism. It is seen as an act of kindness which makes ‘merit’ (‘punya’ in Thai and Sanskrit). The most common way this is thought of is as collecting spiritual reward points towards being reincarnated as something better in the next life, or to make up for your bad deeds to stop you being reincarnated as a cockroach or a Cambodian (Thai people often don’t like Cambodians). A more sophisticated understanding of punya is that the accumulation of good deeds can be carried forward from one incarnation to the next taking a person closer to spiritual enlightenment and Nirvana in each life.

Saving Fish in the Paddy Fields

For very strict Buddhists, merit is gained in meditation and giving up bad habits or worldly desires. Making merit by releasing fish or birds is Buddhism for the common man (or woman) and mixed up with a range of older religious beliefs and superstitions. The tradition of releasing fish as a way of making merit is believed to have been started by rice farmers. When paddy fields dry out small fish are often left stranded between the levees of the field and suffocate as the water recedes. Taking the time to scoop the fish out of the paddy fields and put them into the river is seen in rural communities as a selfless act of kindness, and a display of Buddhist ‘mindfulness’ in the recognition of the suffering of others, even small animals.

Not Good for the Goldfish

It is kind of strange then, when you think about it, that this act of kindness has morphed into people buying goldfish on the street and releasing them into the local canal. Bangkok canals are not very clean and a far from an ideal environment for goldfish. Also it gets very hot in Bangkok and I imagine it gets very hot indeed for those poor fish in the bags by mid morning. Basically people who do this are making merit by killing a goldfish.

Makes Sense if You Are Thai

Odd indeed. However, before we start being too judgemental about all this there is still a point to the whole thing. It is about taking a moment out from your day to ponder life, and your misdeeds in particular, and to feel as though you are doing something to address them. Even if that is by killing a goldfish.

Spare a thought for our goldfish vendor too. If nothing else, at least by buying the goldfish people are helping the smiling chap in the photos get by. Everyone needs to make a living. There ain’t no welfare cheques or social security giros for men of working age in Thailand. You earn money or you and your family go without. Even if it is by killing goldfish.