The Sukkasem Guesthouse (formerly known as Lanna Guesthouse) in Hua Hin is in a central location in and built out over the sea on an old wooden structure previously used as a pier for the local fishing boats.

Hotel On A Fishing Pier

The rooms are tiny and the bathrooms have no door. However, this is not a problem as staying at this hotel feels nearly the same as staying on a boat – the rooms are literally out over the sea. The bed fits snugly into an alcove. 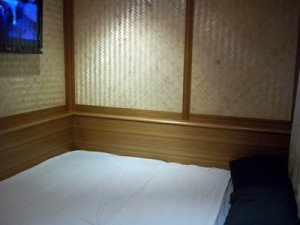 Compact Rooms at the Sukkasem Guesthouse

There is little in the way of noise insulation although the sound of the sea tends to drown out other noises. The beds are comfortable and I slept well during my stay here.

Bedrooms at the Sukkasem Guest House

There is Wifi but it was very difficult to get a connection. There are 80 TV channels on the flat screen covering a range of languages, but no premium movie channels. 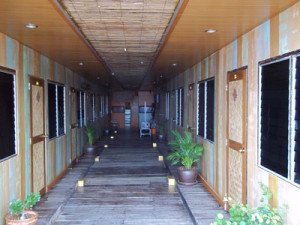 Corridor from reception to the outdoor balcony

The people running the hotel are friendly and efficient. They seem to be constantly working on the hotel, which ruined our afternoon nap although to be fair we had a good sleep at night as the other guests were quiet. These small problems aside I really liked staying there as I could hear the sea below me in bed at night.

Facilities At the Sukkasem Guesthouse

The Sukkasem Guesthouse has a pleasant roof top bar and restaurant. The sea views from there are great. the bar and restaurant seems to shut quite early and many of the guests, me included, brought their own drinks up there later in the evening. 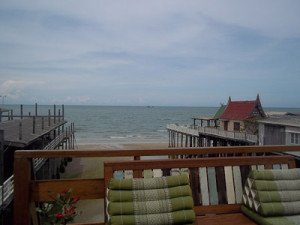 View from the rooftop bar and restaurant

There are so many bars and restaurants nearby, including the excellent Buffalo Bill’s Tavern, that most people will choose to eat out rather than in their hotel or guesthouse.

In the Town Centre

The Sukkasem Guesthouse is on the Naret Damri Alley on the seafront in the centre of Hua Hin. This popular street is packed with great restaurants including the famous Chao Ley Seafood and Saeng Thai Seafood restaurants. 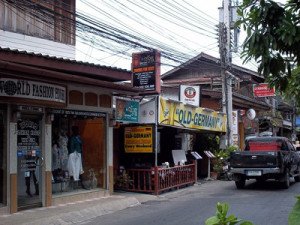 Front entrance of the Sukkasem Guesthouse

These seafood restaurants, and other smaller ones on the same street, are the major draw for foreign and Thai tourists who flock to Hua Hin from Bangkok on the weekends to escape the heat of the city and eat seafood on the seafront. At the weekend it can be a struggle to get a seat at one of the seafood restaurant overlooking the ocean.

Other information about the Hotel

A good option for a short stay close to the all the best restaurants and bars. The location is the big selling point of the hotel and the rooms being built out over sea. This hotel is a piece of the town’s history as it is built on a historic wooden pier and it is close to the great seafront fish restaurants.

Location of the Sukkasem Guesthouse

Next read about Train Travel from Bangkok to Hua Hin