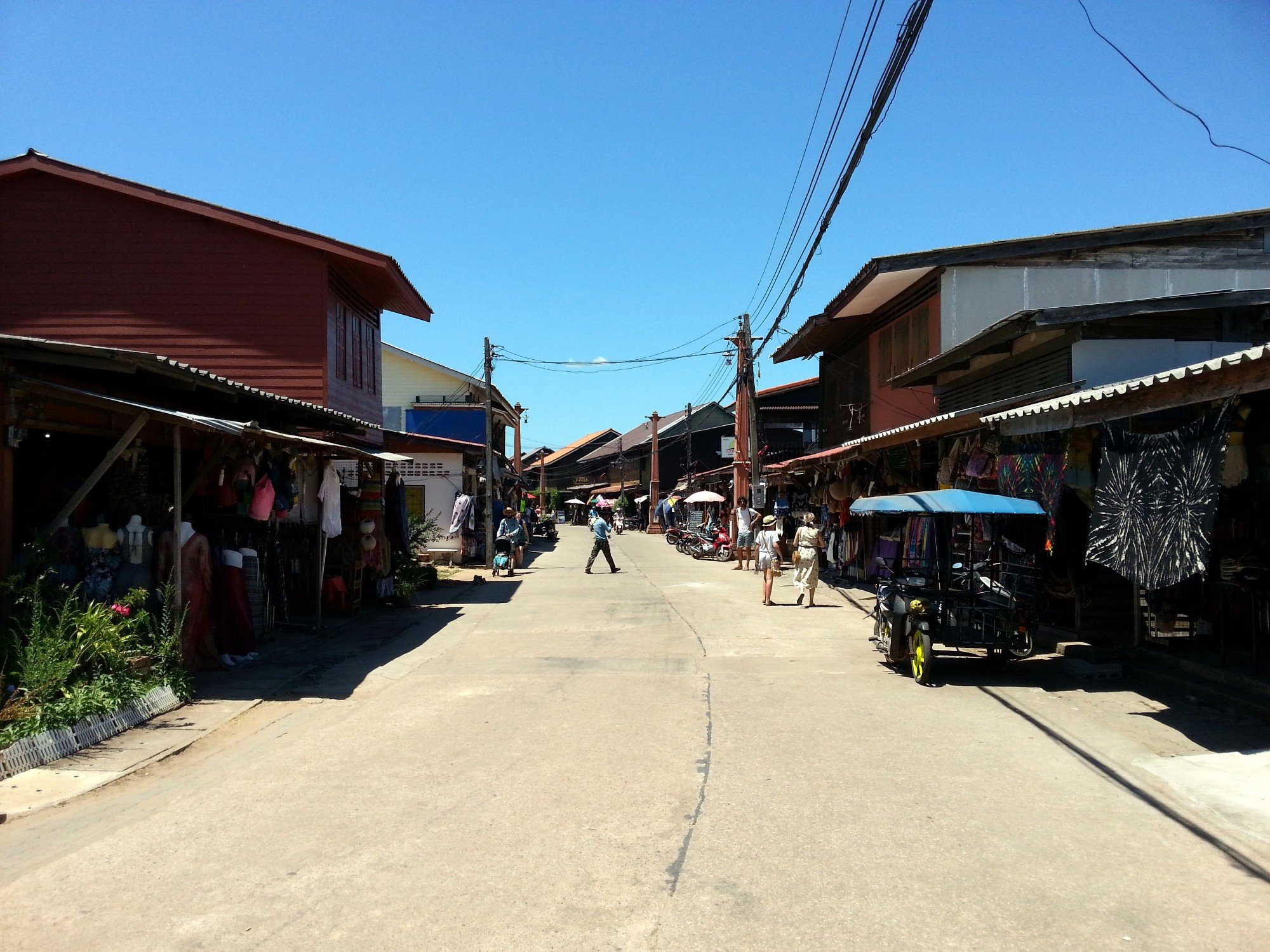 Koh Lanta Old Town looks a lot like it might have done 50 years ago, although the wooden shop houses on the main street have mostly been ‘re-purposed’ to cater for a steady stream of tourists who visit the town on day trips around the island. You can stay in Koh Lanta Old Town but few people choose to do so because its located on the island’s east coast which has no beaches. All the beaches on Koh Lanta are on the west coast of Koh Lanta Yai.

As you enter Koh Lanta Old Town from the main road the first place you come to is a small roundabout with a large Buddhist shrine in the middle. If you are visiting with your own motorbike we recommend that you park your motorbike in the parking spaces near the roundabout. 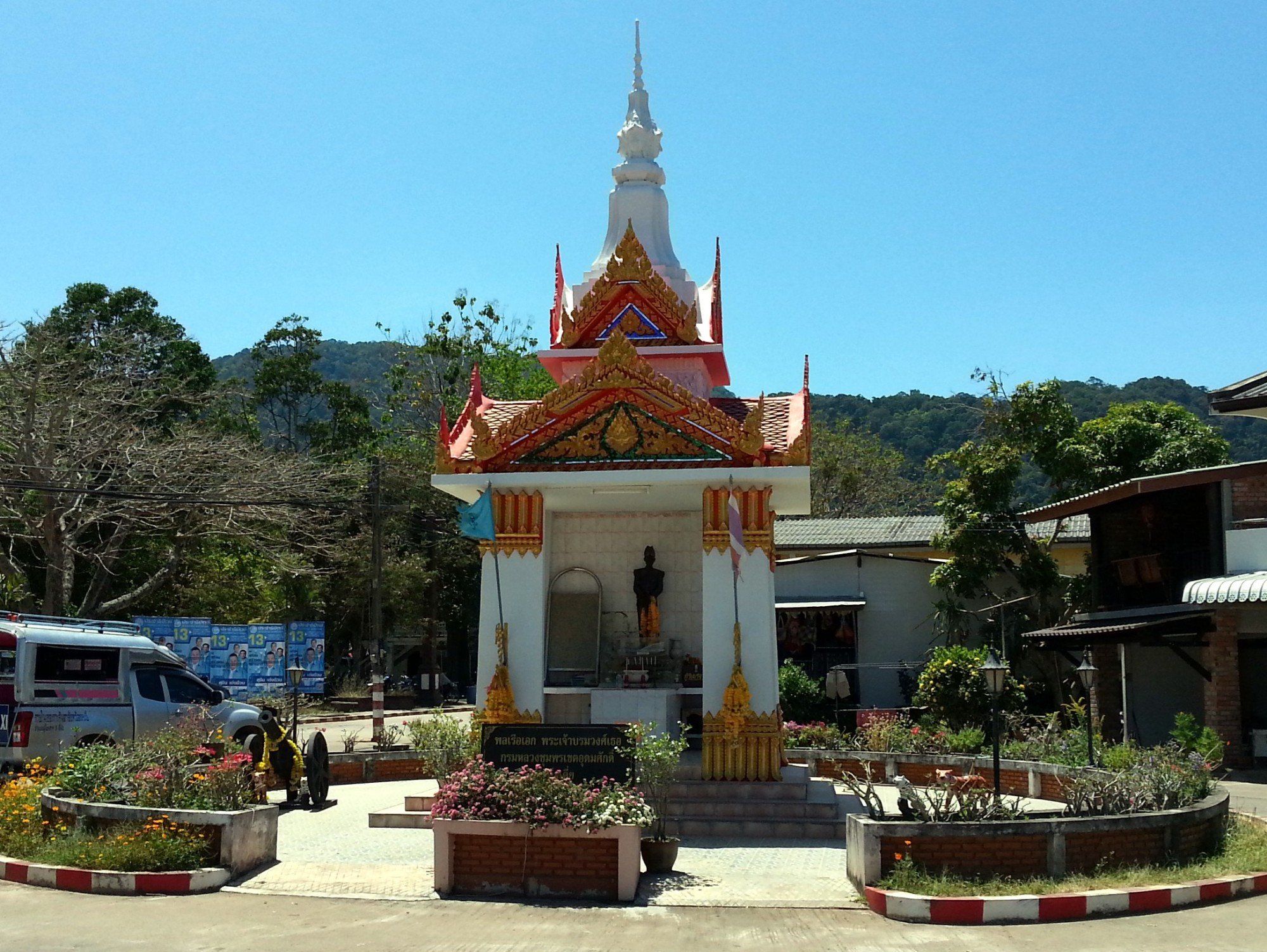 In front of the roundabout is the Old Town Pier which used to be used to bring goods to the island and export produce from the island. The Old Town is no longer a trading centre and the pier is now largely redundant except for a small number of tour boats that depart from this pier on tours around the small islands located off the east coast of Koh Lanta. 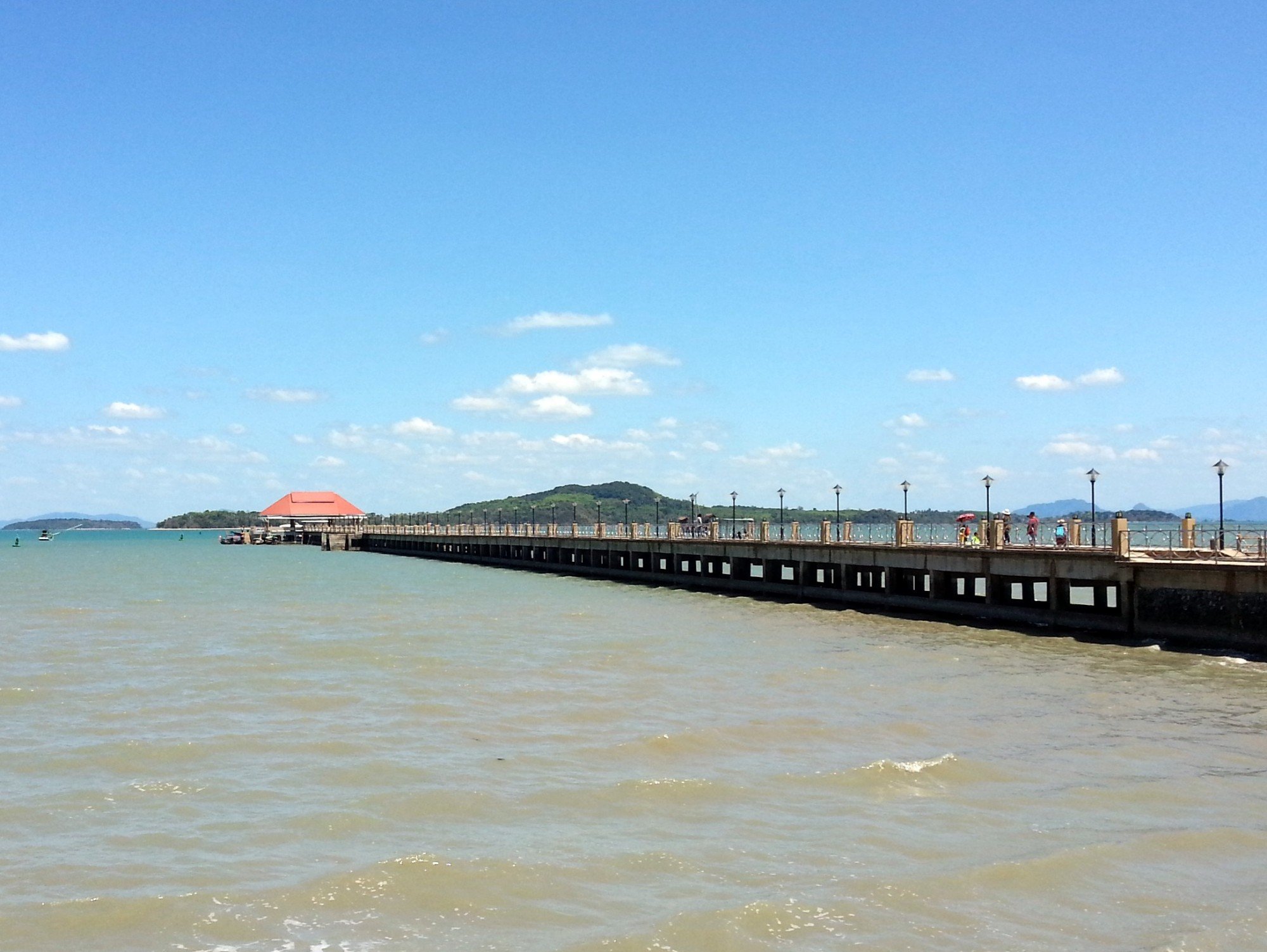 Also close to the roundabout is Koh Lanta Community Museum. This museum was opened in 2007 to display boats, tools and other items used by the different ethnic groups which live on the island, particularly the Chao Leh, also known as ‘sea gypsies’. The Chao Leh used to live a nomadic existence living temporarily on the islands in the south of Thailand and off what is now Malaysia. More recently the governments of both countries have encouraged Chao Leh communities to settle on the mainland and become part of main stream society. There are several Chao Leh villages on the east cost of Koh Lanta Yai and a lot of people who work in the shops and restaurants on the island are Chao Leh, easily identifiable by the distinctive language they speak which is unlike Thai. The museum is in theory open every day from 09:00 to 17:00 but in fact recently its never open. 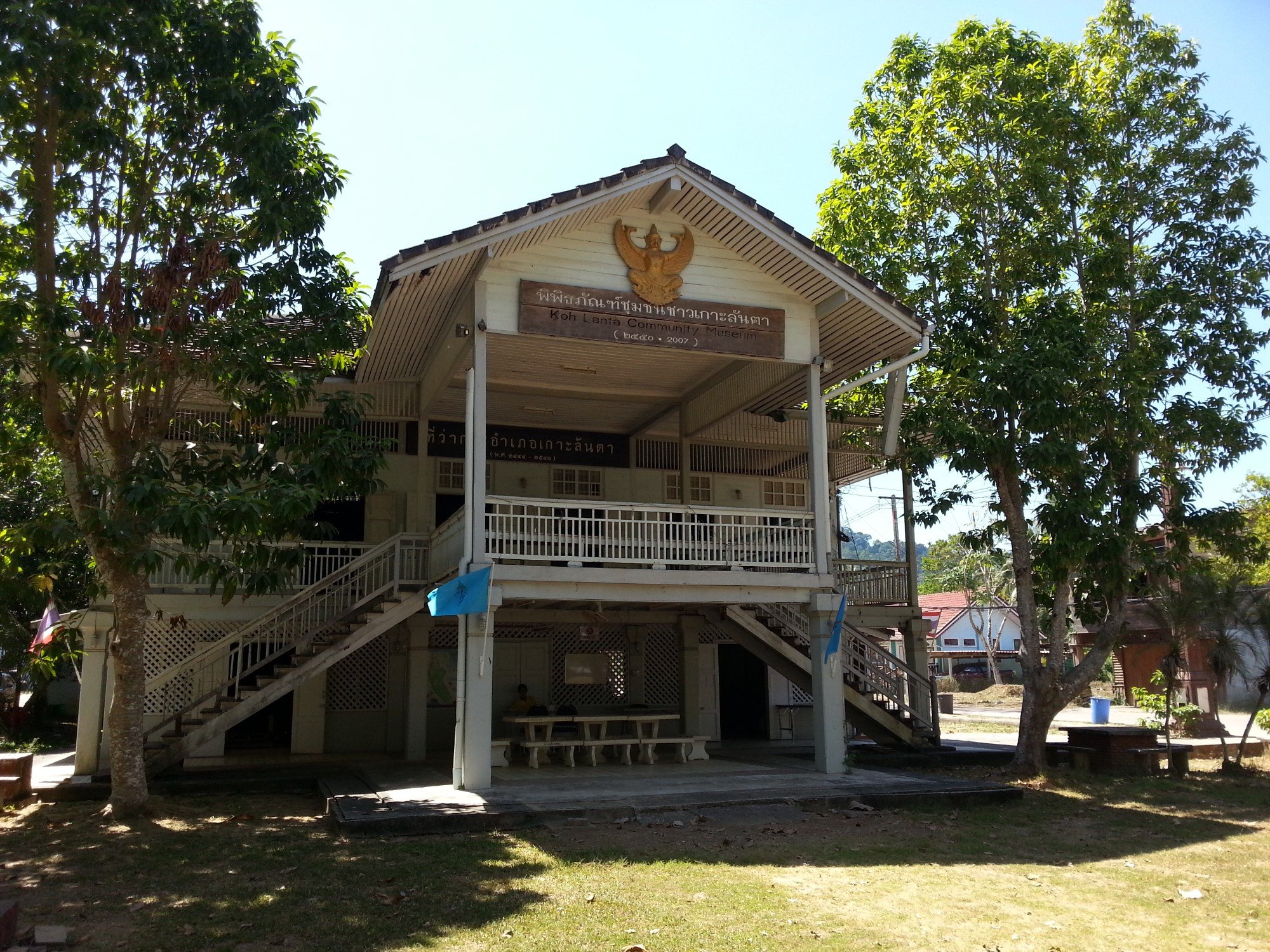 The main street in the Old Town starts at the roundabout. If you look down the coast from near the roundabout you will see a line of wooden houses each with a deck built on stilts over the water. These balconies overhanging the sea are now nearly all used as dining areas for restaurants such as Rareview Coffee & Restaurant, which is one of the better places to eat in Koh Lanta Old Town. 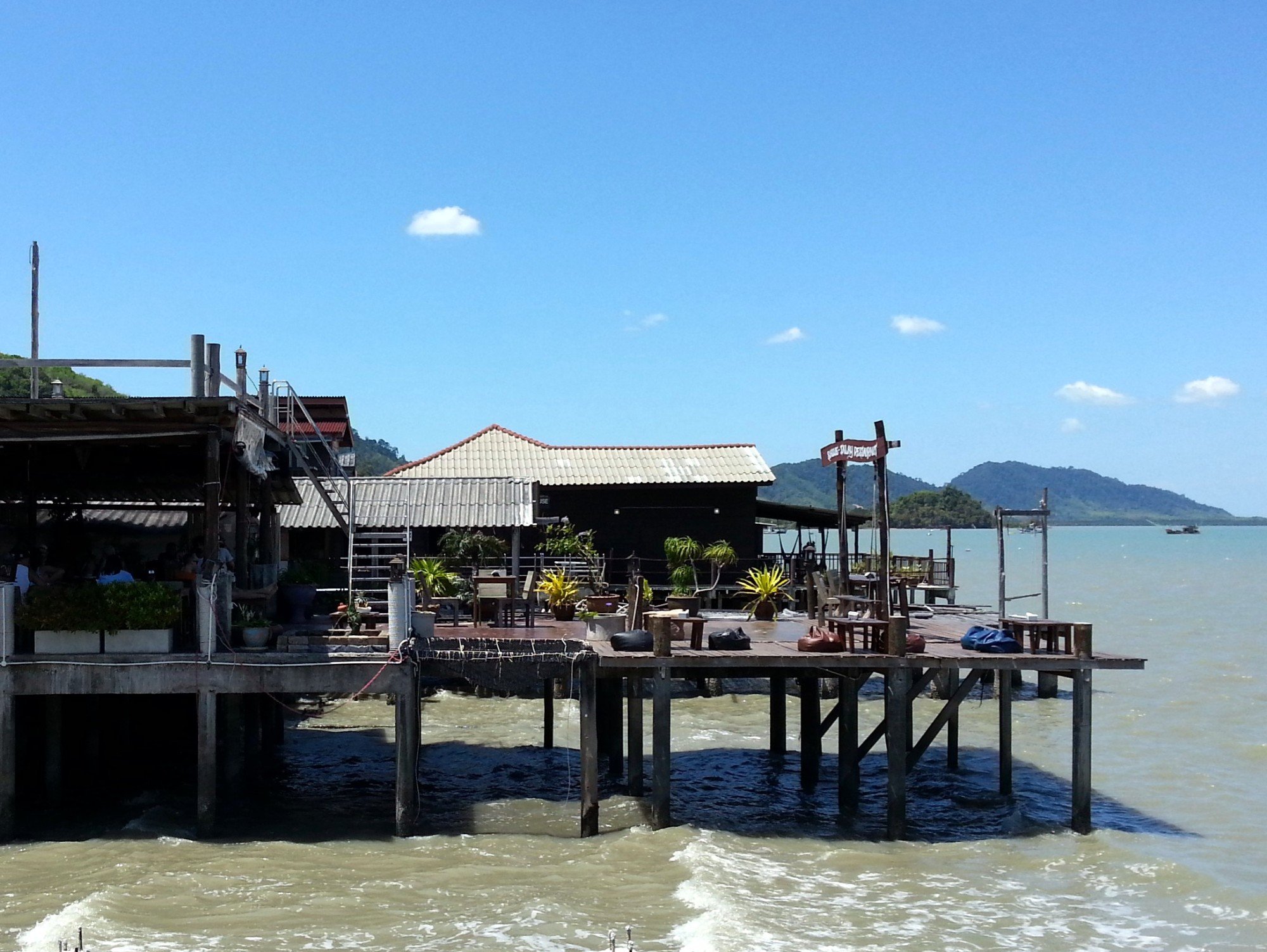 A short walk along the street in Old Town you come to a picturesque Chinese temple on a long pier. The views from the end of the pier where the shrine is located are really good. A large proportion of the town’s inhabitants are descended from Chinese immigrants and it is this group which built the distinctive wooden shop houses which are very similar to the old shop houses you will find in mainland China. 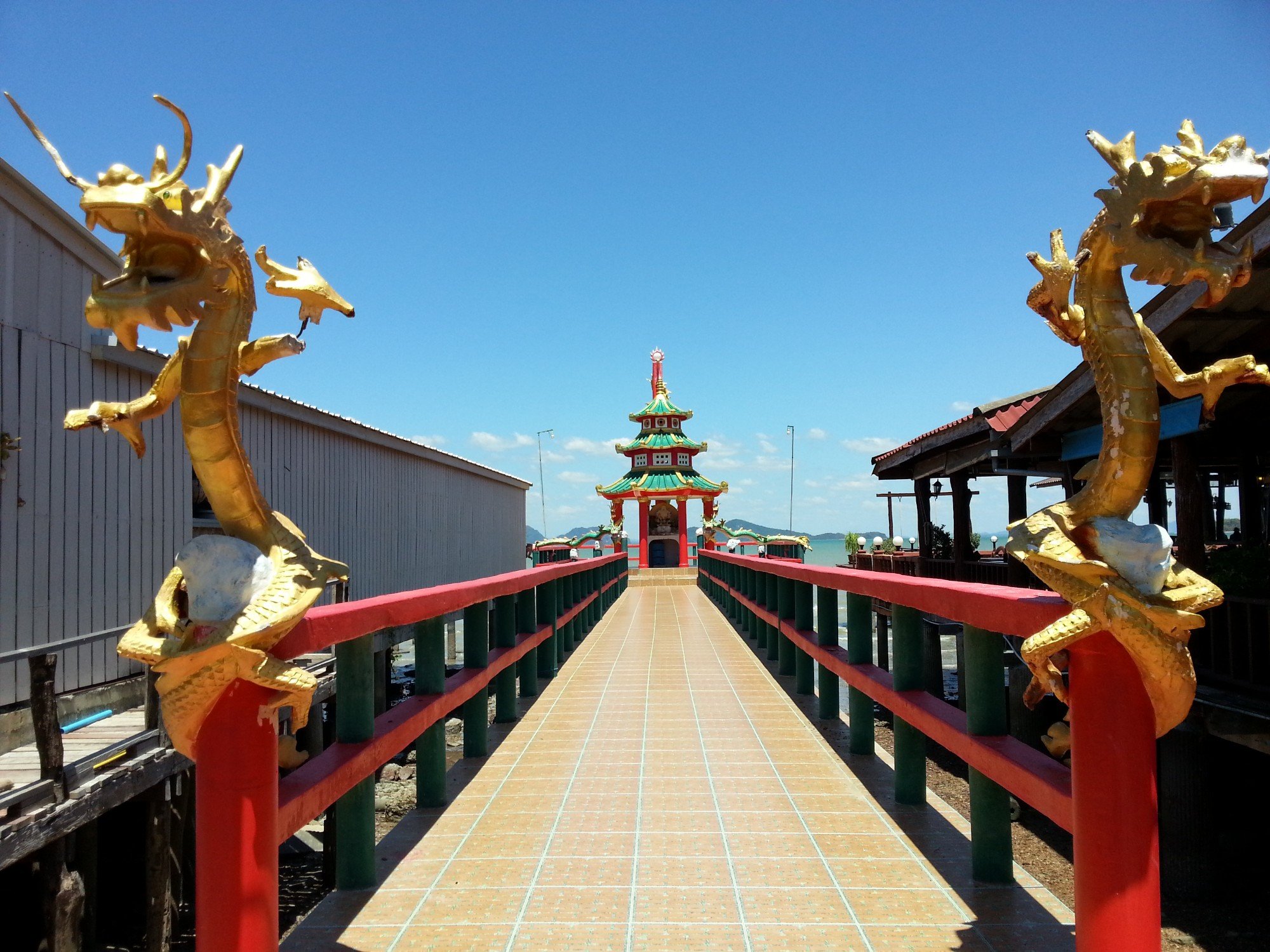 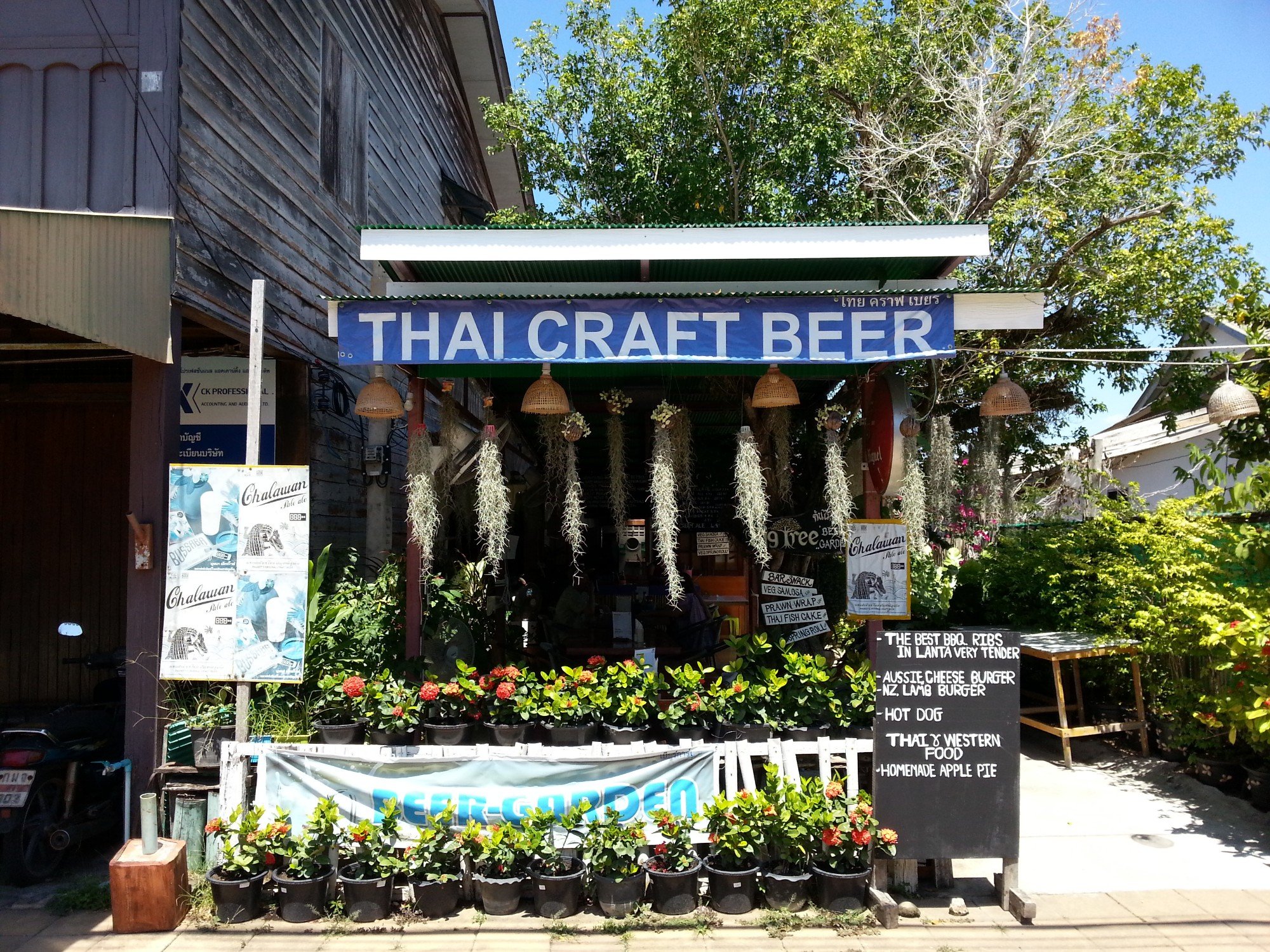 One of the charming things about Koh Lanta Old Town is amongst the big budget commercial enterprises some of the shop houses are still being used for their original purpose. The building with the Taoist shrine right in the middle of the street is a good example of this and an indication that the local community is still going strong despite the shift in commerce towards tourism. 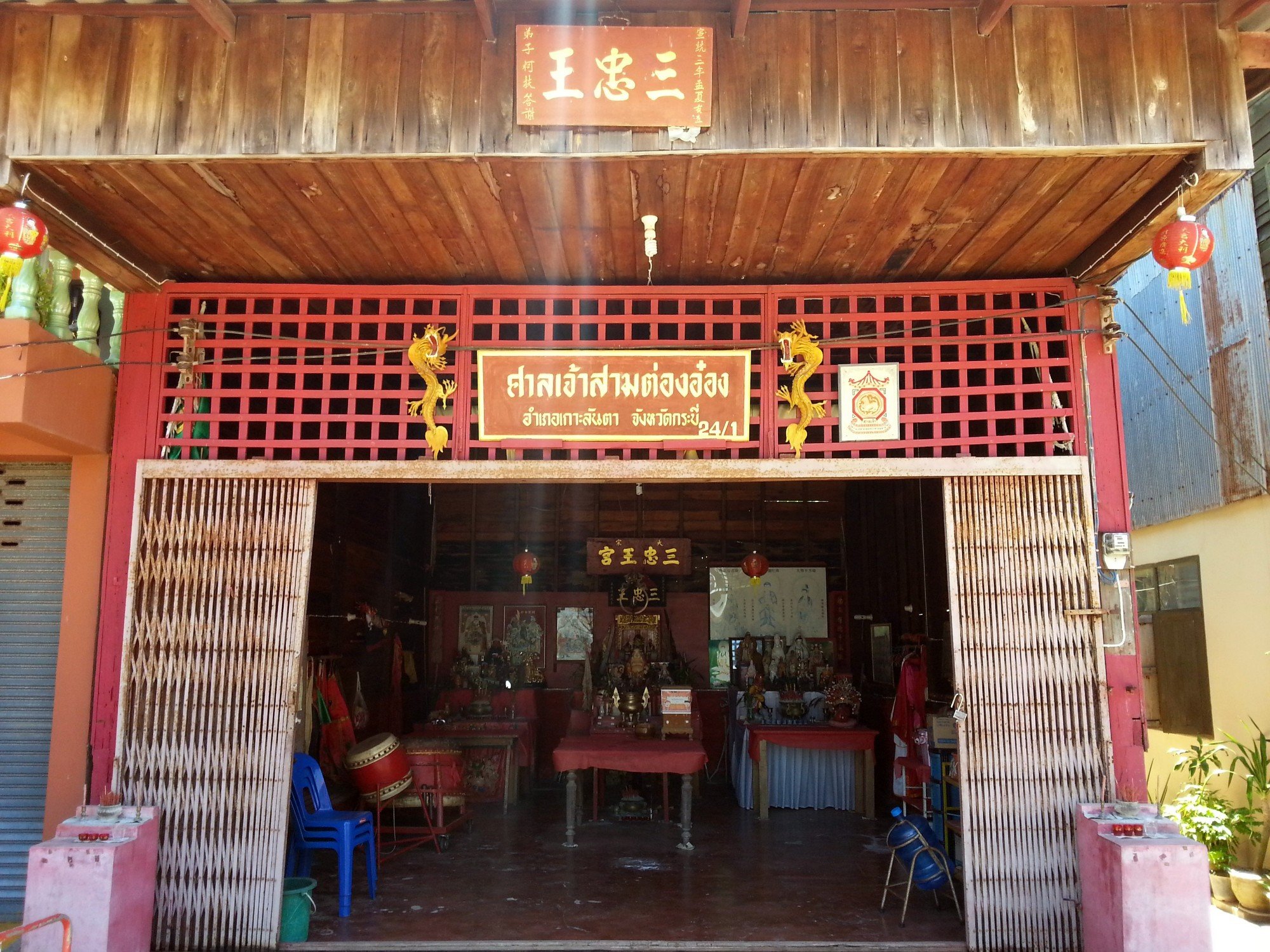 Most of the businesses in Koh Lanta Old Town has tried to be sympathetic to the local environment. The majority of boutique shops, cafes and restaurants serve Thai food or fairly elaborate International dishes with a low key impact on the appearance of the street. Oldtown Cowboy, which is a Wild West themed bar and restaurant, stands out from the other places on the street for being overtly commercial and very similar to the kinds of establishments you might find in Koh Samui or Patong in Phuket. 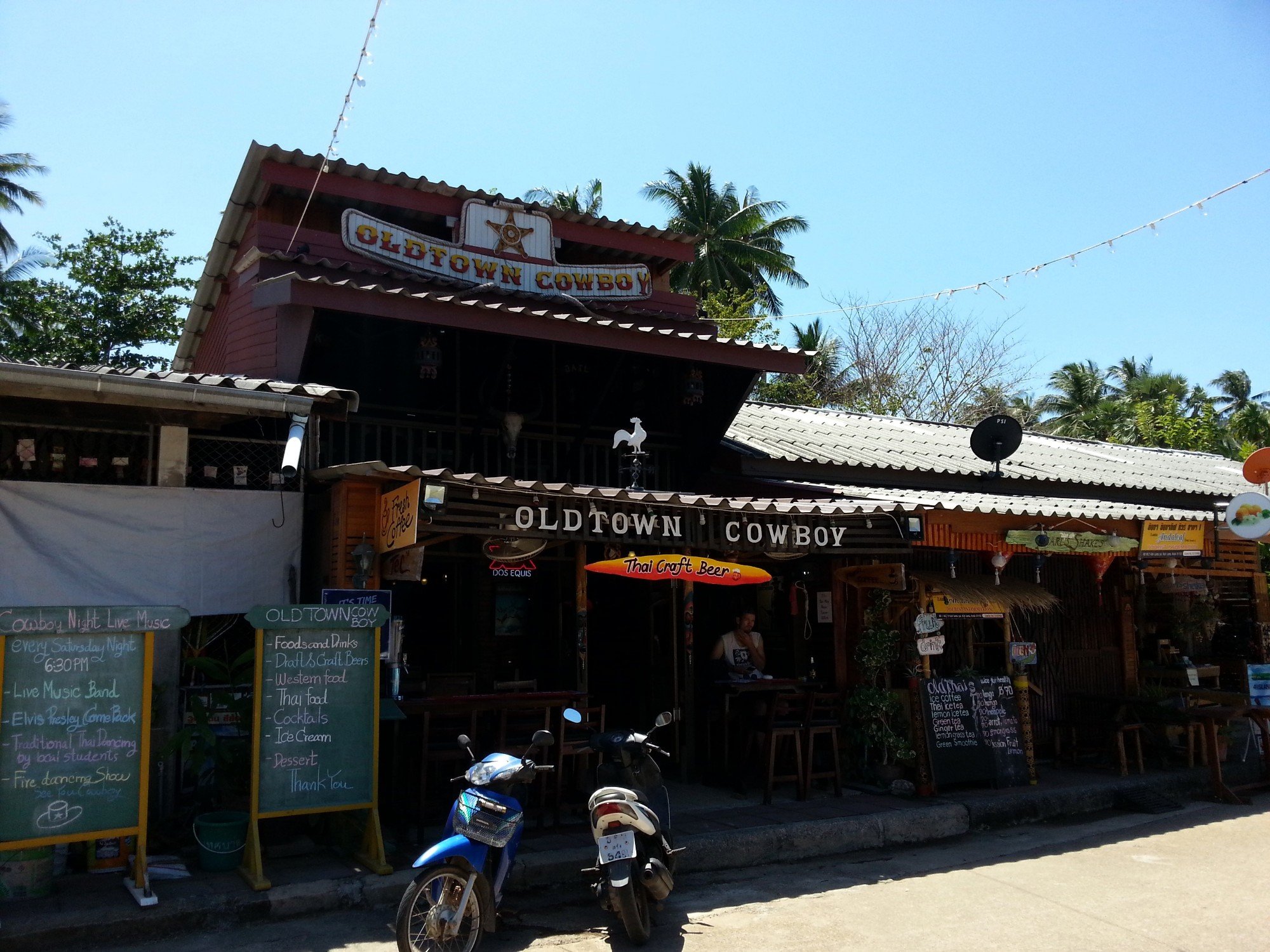 Koh Lanta Old Town is a small place which peters out by the time you reach RaYa Restaurant which is 400 metres walk from the roundabout. The town is so small that you really only need 1 hour or 2 hours (if you stop to eat in the town) to visit this attraction. Koh Lanta Old Town is some where you would visit as a part of a tour around the island, rather than a destination in its own right. 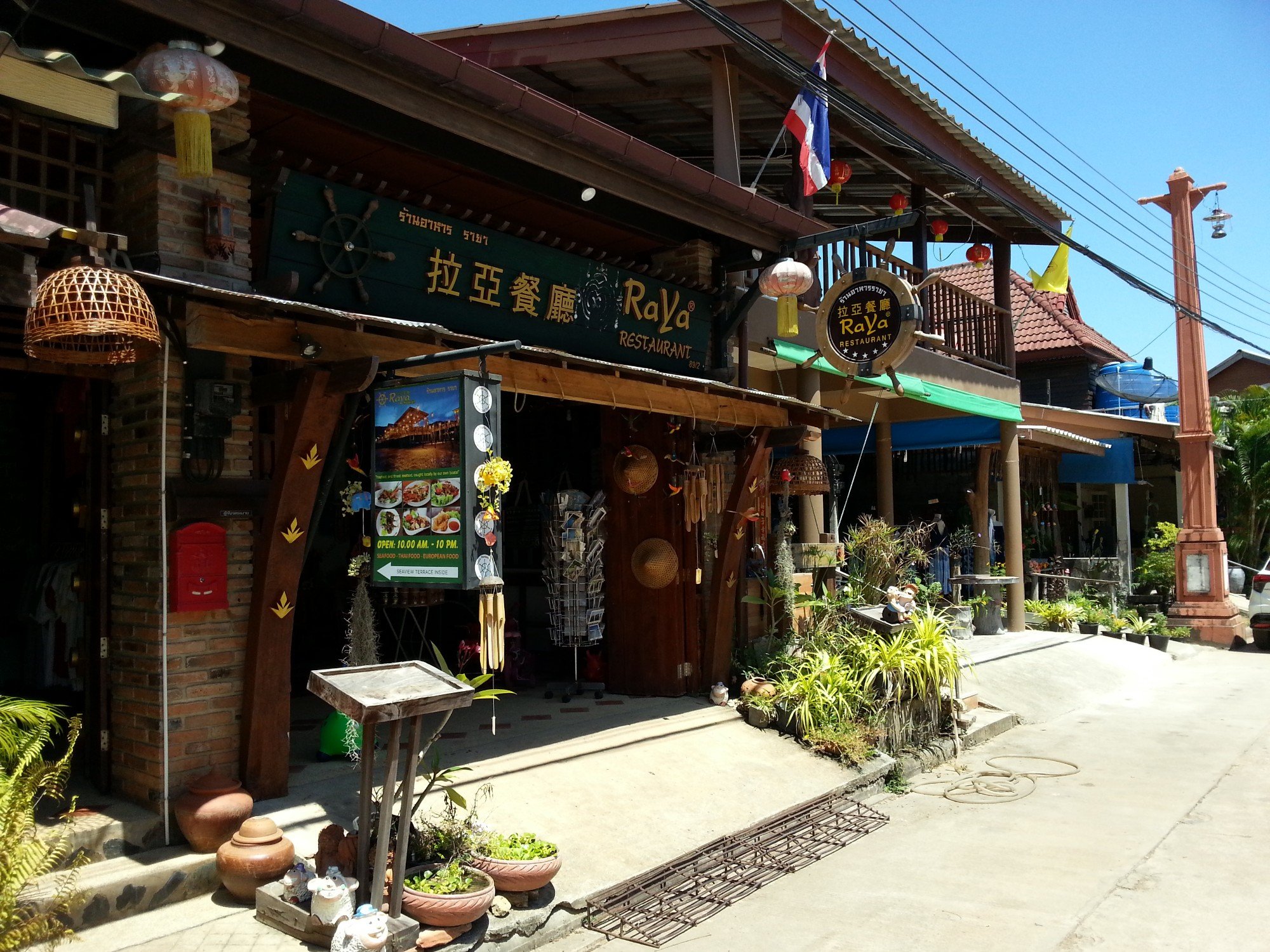 We enjoyed visiting Koh Lanta Old Town which we combined with visits to the beaches on the west coast such as Ao Nui Beach and Bamboo Beach. There is a road which cuts across the island from the west coast to the east coast allowing visitors who rent their own motorbikes to do a circular day trip down the one side of the island and back up the other with is fun but likely to give you sunburn because of the number of hours you spend riding. Koh Lanta Yai is a long island.

Next read about The Sincere Guesthouse in Koh Lanta