Khao kluk kapi is a traditional Thai recipe and one which is unique to Thailand. The recipe is generally the same where ever you eat it in Thailand, which is unusual as the way Thai dishes are cooked normally vary from region to region or even restaurant to restaurant. The main ingredient in the dish is rice fried in shrimp paste. This pungent fried rice is accompanied by lots of other ingredients, some cooked, some raw, all of which are meant to be mixed to together on the plate and all eaten at the same time to create a combination of several different intense flavours at the same time. If you watch Thai people eat this dish you will see that they will take the time to mix up the ingredients on the plate and ensure that each spoonful contains a bit of everything. It is this combination of flavours that is the magic of this dish and the reason why it is so popular in Thailand. 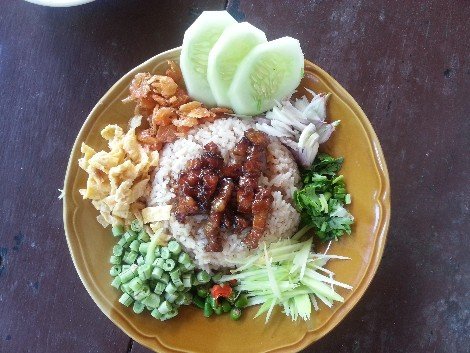 Khao kluk kapi is a challenging dish to prepare as there are lots of separate parts to the dish, each of which need to be prepare separately before being assembled on the plate. None of the individual parts of the dish are particularly difficult to prepare, although the person preparing the dish needs to grasp a number of different basic cooking techniques to make a success of this dish. Making a good khao kluk kapi is a real test of a person’s ability to cook Thai food properly because it requires a mastery of a range of cooking techniques which can only be acquired through having previously prepared other more basic Thai dishes.

To make the rice fried with shrimp paste you need cook rice in advance and for the best results to leave it cool down before starting to cook. 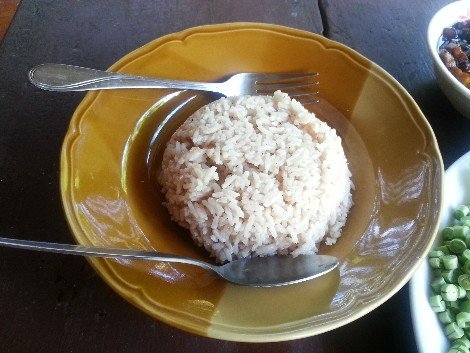 The first step in the cooking process is to dissolve the shrimp paste in boiling water. Shrimp paste, known in Thai as ‘kapi’, is made through a process of fermenting whole shrimps and the paste has an unpleasant aroma in its raw form. This is an ingredient you need to buy as the process involved in making would be near impossible to replicate. The next step is fry garlic in oil. The shrimp paste dissolved in water and the cooked rice is then added to the cooked garlic, and oil in the pan, and left to heat through on a low flame.

The sweet pork which accompanies the rice fried with shrimp paste is made by stewing small cubes of belly pork. 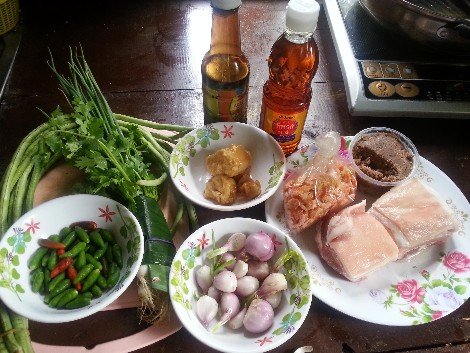 The first step in making the sweat pork is to fry shallots. The shallots are then removed from the pan and the pork cubes fried in the same oil. Once the pork has coloured add water. Once the water has boiled seasoning and soy sauce, dark and light, is added to the water. The water is left to reduce and once most of it has evaporated palm sugar is added, and once that is fully dissolved the shallots are added back to the mixture which is left to cool before serving.

The remaining parts of the dish can be divided into cooked and raw items. The dish is traditionally made with three additional cooked elements: 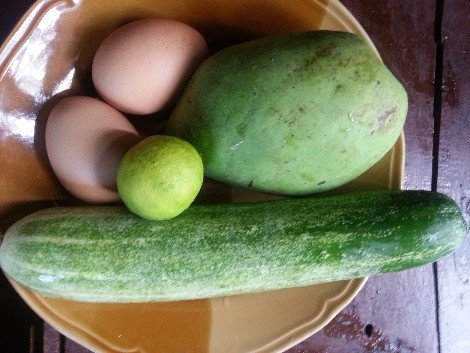 The raw ingredients in khao kluk kapi play a crucial part in the dish imparting tangy and sour flavours, as well introducing crunchy textures which are a contrast to the softness of the rice, egg and meat:

The dish can either be prepared with the cook arranging the ingredients on a plate for the person eating it to mix together, or with plates of the rice brought to the table and along with a large serving plate of the other ingredients for the dinners to add to their plate as per their own preferences.

Next read about Nasi Lemak