There are two ways to get from Bangkok to Nakhon Phanom:

The journey by bus from Bangkok to Nakhon Phanom is scheduled to take between 10 hours 30 minutes and 12 hours 10 minutes depending upon which bus service you take. Flying is considerably quicker with the scheduled flight time of 1 hour 10 minutes to 1 hours 35 minutes from Bangkok to Nakhon Phanom. Travelling by bus is, however, only about 50% of the cost of flying and a good option if you are travelling on a tight budget.

Use the Search Box below to buy bus tickets and flights from Bangkok to Nakhon Phanom.

We recommend booking in advance at least a week before the day of travel if you want to take one of the VIP or VIP24 bus services from Bangkok to Nakhon Phanom as these tickets tend to be the ones which are most in demand for the long bus journey. You can also book flights from Bangkok to Nakhom Phanom through the Search Box above.

Location of the Northern Bus Terminal 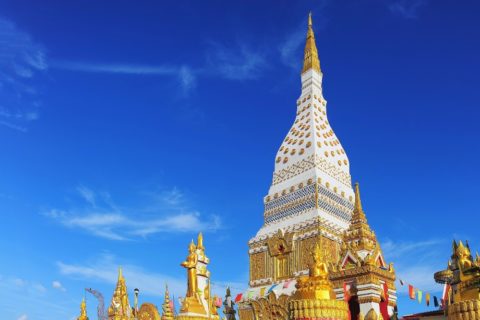 Wat Phra That Phanom was built in the 16th Century by the Laotion King Setthathirath, on the site of an earlier temple dating back to the 10th Century, and according to local legend the temple houses the breast bone of the Buddha. The centre piece of the temple is a 57 metre tall chedi painted in white and decorated in gold. The ornately sculptured top piece of the chedi is believed to contain 110 kilo of gold. Each year a week long festival in held in the temple grounds in April or May (the date varies according to cycles of the moon) and That Phanom town becomes very busy with pilgrims coming to the temple during this period. Admission to Wat Phra That Phanom is free and the temple is open every day of the year during daylight hours.

Next read about How to Travel from Bangkok to Siem Reap