To travel from the Cambodia-Thailand border to Bangkok you need to pass through immigration from Poipet and then make your way the short distance from the Rong Kluea Market area on the Thailand side of the border into Aranyaprathet town. From Aranyaprathet town you can either take a train to Bangkok or a bus. We recommend taking a bus because there are lots of departures and the journey only takes 5 hours 30 minutes. The two daily train services at 06.40 and 13.55 are scheduled to complete the journey from Aranyaprathet to Bangkok in about the same time (5 hours 25 minutes to 5 hours 45 minutes) but the reality is that these train services usually take 7 hours or more to reach Bangkok stopping at no fewer than 42 stations on route.

Use the Search Box below to buy your bus tickets from Aranyaprathet, which is near to the border with Cambodia, to Bangkok:

Check in 30 minutes before your bus is due to depart. We recommend that you print out your booking voucher and bring it with to the bus station.

Bus services from Bangkok Aranyaprathet terminate at Bangkok’s Northern Bus Terminal, Morchit Bus Station. For travel from there to other locations in central Bangkok by public transport your easiest easier option to take a meter taxi to either Mo Chit BTS station, where you can join Bangkok elevated railway network covering large parts of metropolitan Bangkok, or if you are planning to catch a train then take a taxi to Chatuchak Park MRT station, from where you take the metro direct to Bangkok Train Station.

The border crossing is 6.5 km from Aranyaprathet Sa Kaeo Bus Station. There are several different types of public transport service which can take from the main road in front of the Rong Kluea Market, which adjacent to the Thai immigration post. Avoid the ‘Government Bus’ which people with bad intentions will direct you to use. It is not operated by the Government and it is an expensive option. 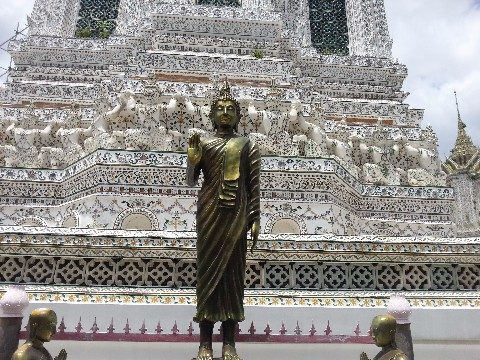 By road the journey from the Thai side of the border to Aranyaprathet should take around 12 minutes. The cheapest way to complete the journey is in a shared songthaew taxi which should cost only 15 THB per person. The next cheapest option is a motorbike taxi. Agree the price before you set off. Expect to pay 40 to 60 THB for the journey by motorbike taxi. A slightly more expensive option is to take a tuk-tuk, although if there are two or three people travelling together it can work out cheaper than travelling by motorbike taxi. Again you need to agree the price before you set off. The journey from the border to Aranyaprathet town by tuk-tuk should cost in the range of 60 to 80 THB.