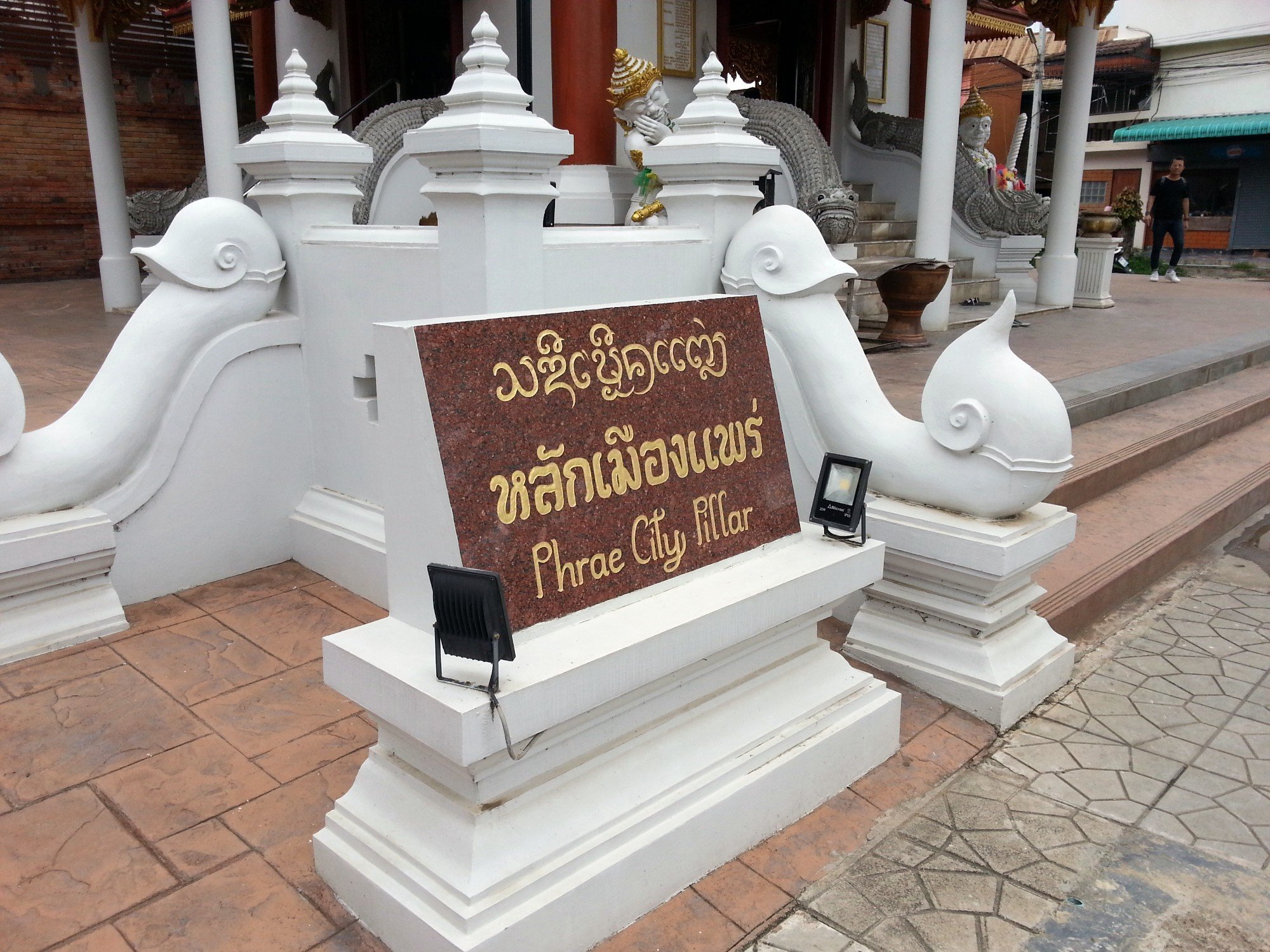 Phrae City Pillar Shrine is open during daylight hours and admission is free. 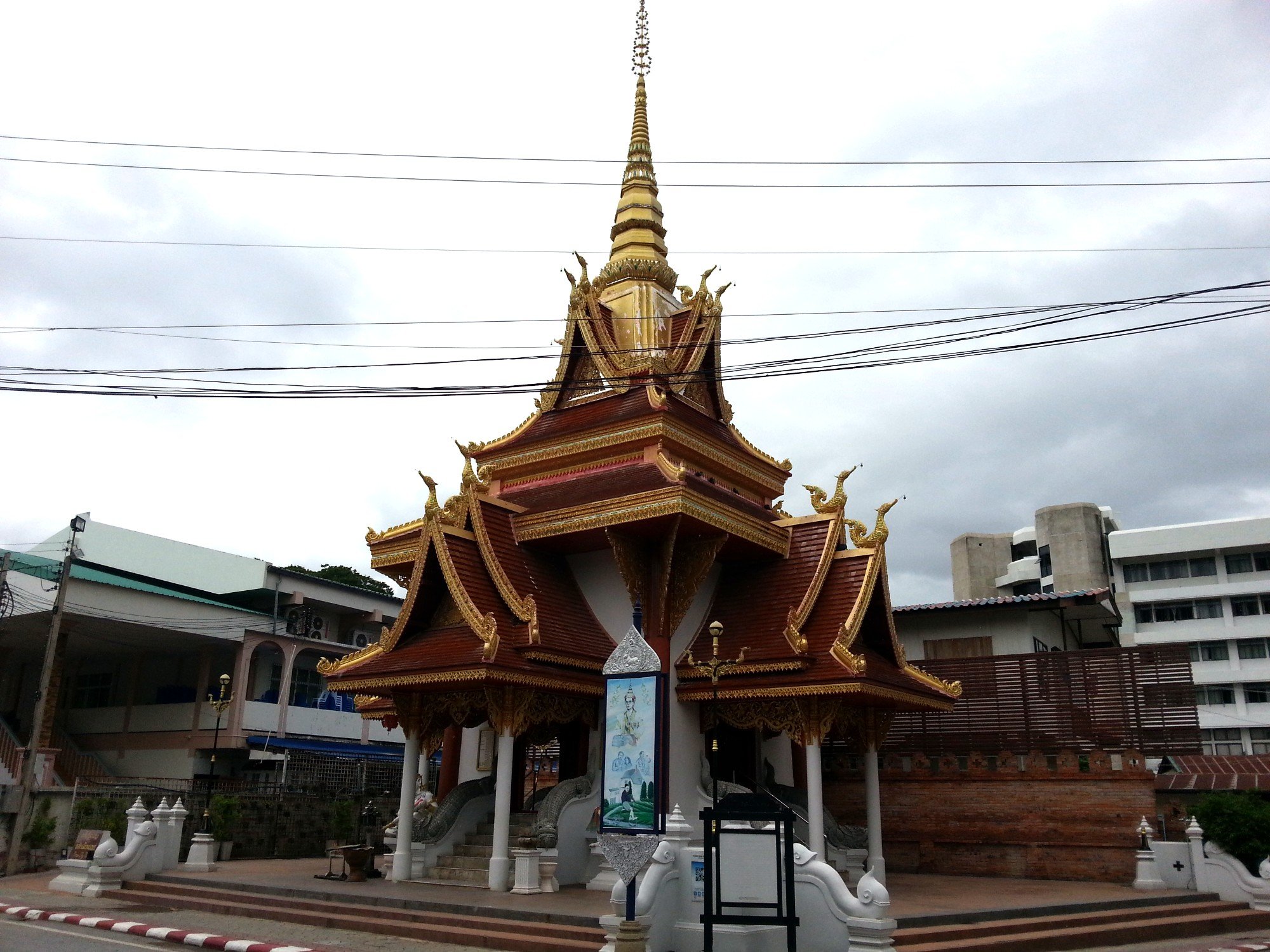 Outside of Phrae City Pillar Shrine

City pillar shrines mark the symbolic founding of a spiritual community alongside the physical community. They are also intended to be where the guardian spirits of the town or city reside, making them in many ways like a ‘spirit house’ for the community as a whole. Local people come to city pillar shrines to pray and leave offering to the guardian spirits in the same way that they would if they have a spirit house at their own homes. 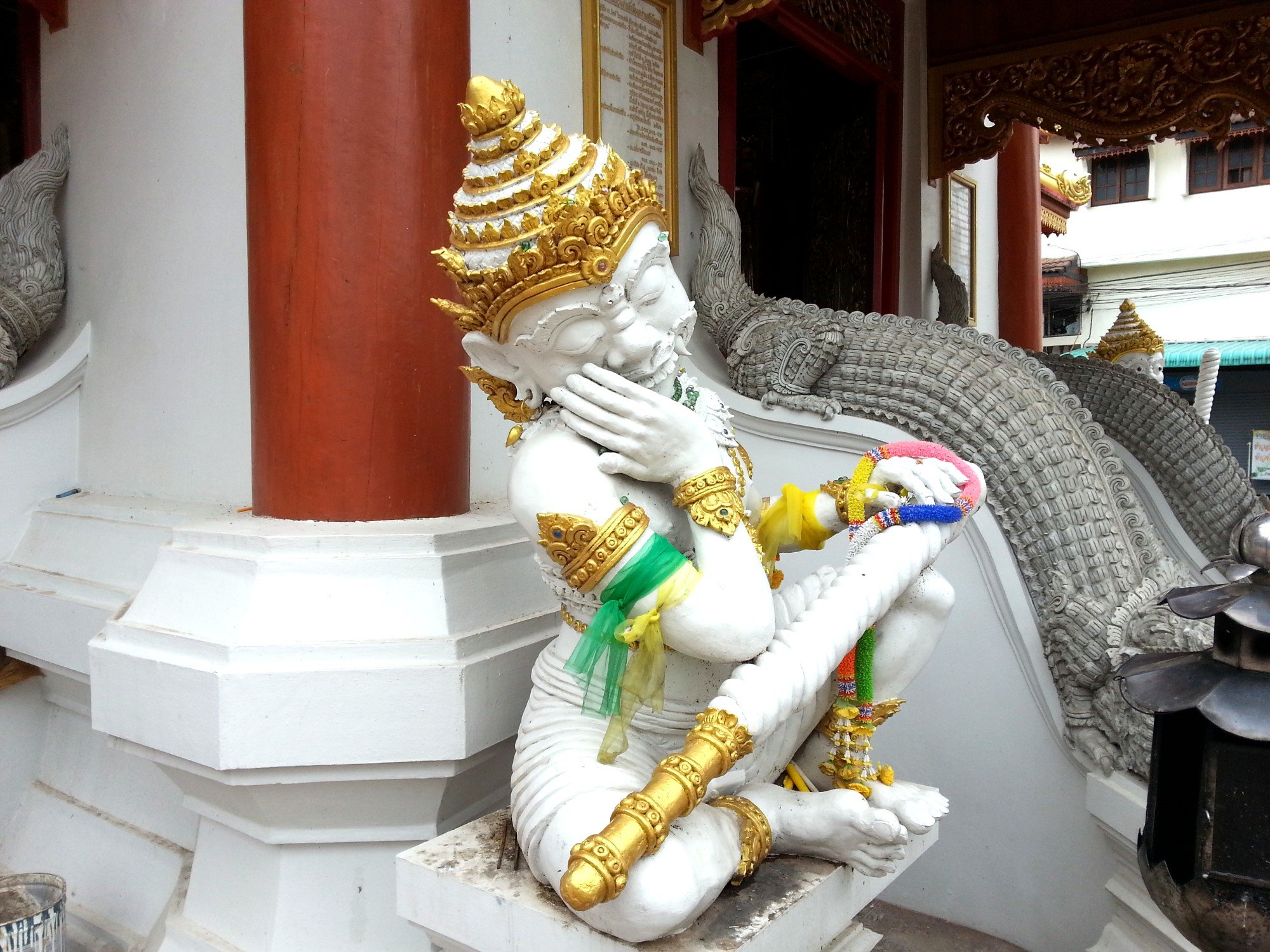 Phrae’s city pillar shrine is located within a very ornate mondop, which is a square based building with a pyramidal roof. The roof is reminiscent of Burmese style roofs showing the cultural influence of Burma on this part of Thailand. The shrine also has some classical Thai features such as the nagas which are crouched on the banisters of the three staircases leading into the shrine and the two yaksha guardian warriors, which are supposed to keep watch over the front of the shrine. At Phrae’s city pillar shrine one of the yaksha is sleeping and the other is distracted by something in the distance which is a reflection of the calm and peaceful town of Phrae. The meaning is clearly that in Phrae there are no threats require the vigilance of the yaksha demons. 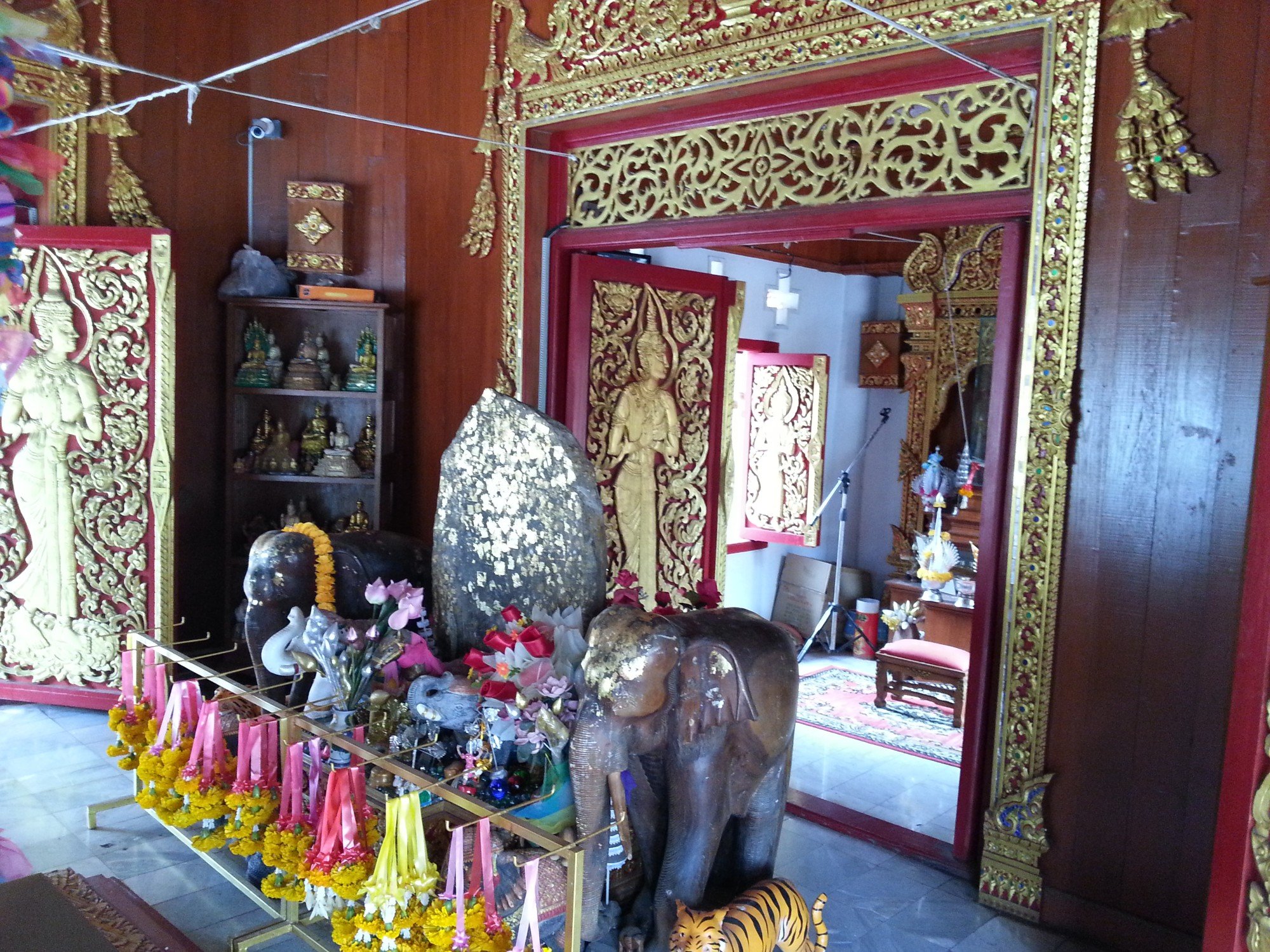 Inside the Phrae City Pillar Shrine

Inside the shrine is also ornately decorated with teak panelling and doors, as well as statues of elephants and tigers. This is appropriate as Phrae used to be an important centre for the teak logging industry with an abundance of wild animals including tigers and leopards wandering around the forests, that is before they were largely cut down to supply the international teak market. The shrine also contains an old stone tablet inscribed with an account of the founding of the city of Phrae in 1371. 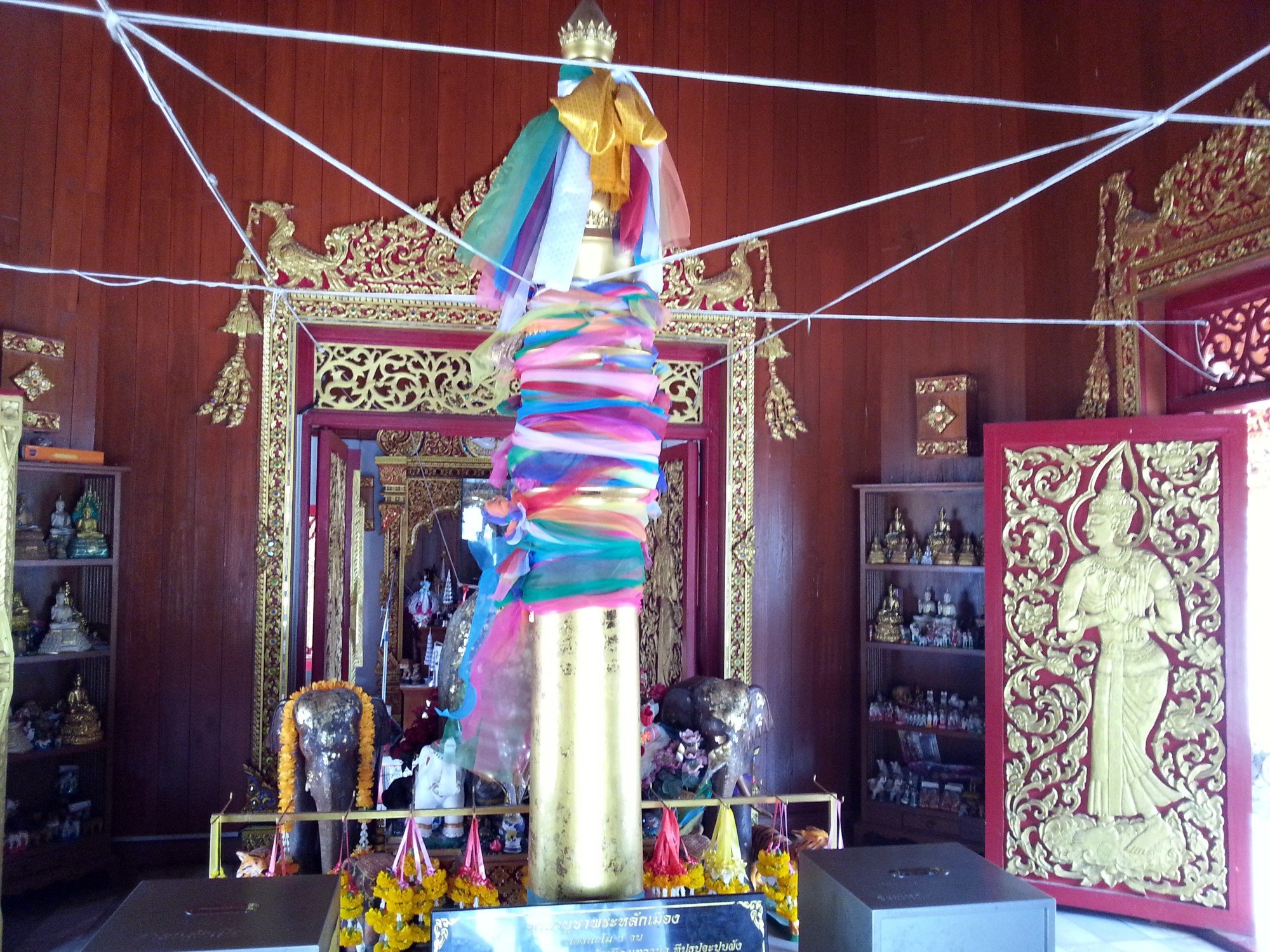 As is the tradition in Thailand, the centre piece of the city pillar shrine in Phrae is an acacia wood pillar coated in gold paint. These pillars are not dissimilar in lingam in Indian temples, which represent Shiva, as the design of the first city pillar shrine in Bangkok was created by Brahmin priests who play an important part in Royal ceremonies in Thailand. The type of wood used in also significant. In Thai acacia wood is called chaiyapreuk which means the ‘tree of victory’ referencing the centuries of violent struggle leading up to the founding of a unified and sovereign state of Thailand.

Next see Bus times from Bangkok to Phrae